The Pre – History of Teaching 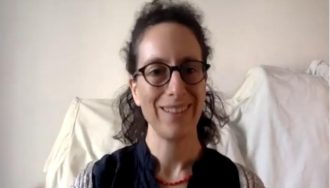 For the researchers of AMMACHI Labs and CWEGE to be exposed to the high caliber of research and work that Natalie Uomini has done, and to gain insights into the research process through her experiences. Additionally, any potential collaboration that comes out of these interactions is welcomed.
Participants: Ammachi Labs & CWEGE Research Staff & Scholars.

Natalie Uomini is a cognitive scientist who is interested in the origins of intelligence. She combines methods from anthropology, archaeology, psychology, neuroscience, linguistics, and animal behaviour to study how we came to be human. I am fascinated by similarities across cultures (what all humans share) and the cultural differences in how people think and see the world.

Natalie Uominitalk outline was, first she introduced the general research questions and then an experiment about teaching, then how to make stone tools and experiment on origami and conclude with some thoughts of her about unschooling.

Teaching is helping other people learn. The ingredients of teaching

2 Stages of learning are there

But how is this learning happening

Learning has method & technique, knowledge and know-how, Declarative Vs Procedural and Conceptual understanding & motor execution. There are different ways of learning and different experiments are explained. One experiment was

In the way in the amount of observation that people do, so in this experiment they studied children from the U.S. and children from Mexico and they found out that the U.S. children were not watching what was happening they were just looking at their smartphones and the Mexico children were very much paying attention to everything around them and they were able to just learn the skill without any trouble.

A video was played by her about a demonstration of how prehistoric people actually had to make their tool. These skills that were done in the past were very much about hand skills and you have to have a strategy or conceptual knowledge of what order to hit these things in.

People who work on the technology and in human past talk about different milestones, so the first one would be around three million years ago and it’s been called a momentous threshold in our evolution because it was essentially different from what other creatures were doing at the time and there is another milestone when people are using those stone to get a lot of meat ,so they were eating carcasses and the stone allowed them to really get into those carcasses to get much more meat to feed their brains and their bodies and this also allowed their brains to grow very large and that’s why we have large brains even though now we don’t need to eat meat necessarily but in at one point in the past that was what allowed the brains to get large and the third milestone is around 2 million years or one point eight million years ago with the schoolian and there people are started to turning these stones into a shape and this is when probably people started to have apprentices and in particular and then we started seeing virtuosos, that is very rare stone tools that appear to be extremely symmetrical , and beautiful and this took a lot skills and time.

This experiment explains how these skills were passed on in particular she asked how much teaching was needed to learn these earliest tool-making skills? and collaborated with an evolutionary biologist and we made an experiment  in five conditions so we people either they could  only see the tools or they could watch somebody doing it or they could interact and the teacher could really only make very basic things like pointing or slowing down their movements in the complex gesture condition ,people were allowed to use their hands to make signs or indicate things for example and in the verbal language condition they could talk and interact normally. We used a chain design where somebody was taught and then they had to teach the next person and they had to teach the next person and so on and we looked at how well they were able to make these tools and we tested 184 students. We made an experimental setup and in the beginning there was an expert who started the chain. They chose one of those five conditions and taught somebody and then they were tested so the  person had five minutes to make as many good tools as possible from this chunk of rock and then they became the teacher for the next student. The results are they are looking at the amount of good tools that were made from this rock because when you are good at making stone tools you can take a rock and make a lot of useful tools from it. And they did a graph with the results. And the conclusion is acquiring skills to make the earliest human technology (Oldowan tools) is greatly enhanced by teaching.

And the second experiment was about origami study and she explained it.

The conclusion is no effect of viewing position on performance or quality of origami learning.

She showed the picture of a child, this picture is a Neanderthal child and it’s a reconstruction and it shows us how different people can be and this child lived around 50000 years ago and it was not related to us, so it was a parallel branch of humans that went extinct and in fact their brains were larger than our brains and they were making the extremely complex tools stone tools that even now we struggle to reconstruct ,so they were very smart and yet they lived very primitive and they were hunting mammoths and large really large animals and they were extremely talented and very strong physically and they didn’t have school and somehow they manage to pass all these skills for they need to survive.

How to Reconstruct the Pre-History of Teaching?

Classroom education is a recent invention. It is not very effective. 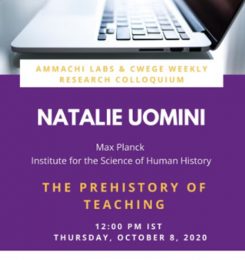 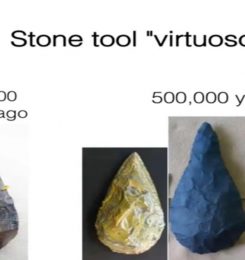 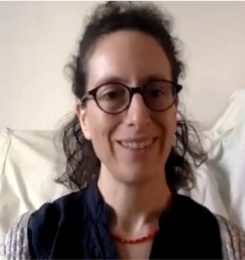