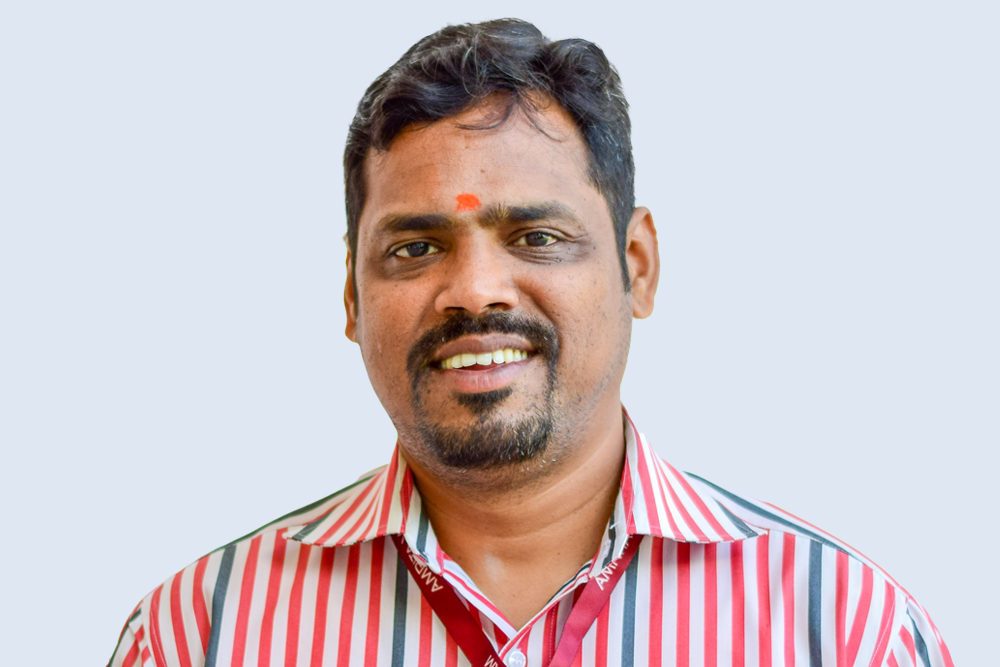 He holds a Doctorate Degree in Chandasshastram from Deccan College, Post-graduate and Research Institute, Pune, in 2019. He completed his M. Phil. (Chandasshastra) in 2010 from Y.C.M.O.U through K. J. Somaiya Bharatiya Sanskriti Peetham, Mumbai. He completed his Masters from Mahakavi Kulguru Kalidas Sanskrit Vishwa Vidyalaya, Ramtek, Nagpur, and also from the University of Mumbai in Vyakaranashastra. He holds a Licentiate Diploma in Textile Manufacturing from Veermata Jijabai Technical Institute (Victoria Jubilee Technical Institute – V.J.T.I.), Mumbai, in 1999.

Dr. Shreehari V. Gokarnakar has 22 years’ experience in teaching Sanskrit to students from grade VIII to X, including 12 years in various Institutes (1997 to 2009) as a visiting faculty and 10 years in Udayachal High School (2009 to 2019) which is considered as one of the Experimental Schools in Mumbai. During this time of school teaching, he participated in many cultural events.

Dr. Shreehari V. Gokarnakar has 14 years’ experience (2005 to 2019) of working as a visiting faculty at Bharat College of Fine Arts and Culture, Mumbai. He was also working in Sarfojiraje Bhosle Bharatnatyam Training and Research Centre, (SBBTRC) Mumbai, since 2005, with a renowned Bharatnatyam exponent Dr. Sandhya Purecha, on several manuscripts for translation. He also worked as a visiting faculty at Ramkrishna Bajaj Sanskrit Bhavan, University of Mumbai (2009 to 2012).

Dr. Shreehari V. Gokarnakar has delivered various lectures on Classical Sanskrit Literature, Vyakaranashastra, and Chandasshastra in various Institutes, Colleges, and Universities. His poems and articles are published in many Sanskrit periodicals and magazines like Gunjarava, Girvanasudha, Saparpanam, etc. A poem on monsoon season is published in Maharashtra State Board Textbook of Std VIII. Many translated songs and compositions are available on Youtube channel ‘SANSKRITSHREE’ and on his blog. He is a member of the Board of Studies (BOS) in the Maharashtra State Board Committee for framing the textbooks of grade X and also did editorial work for grade VIII and IX. He anchored many cultural events and arangetrams organized by SBBTRC and Bharat college. He judged various competitions organized by Maharshi Vyasa Vidya Pratishthan, Mumbai. He has written various songs for music channels, documentary films, and commercial films too. He has acted in a short film based on Independence Day, “Young Dreams.” He has translated a documentary film in Sanskrit entitled  ‘Chatrapati Shivaji Maharaj – the greatest’ and gave a voice-over to it in 2019.

Dr Shreehari V. Gokarnakar has presented various articles and research papers on various platforms.  A book ‘Kalāsa Karaṇa and Sthānaka Maṇḍala Bheda from Kumbharāja’s Nṛtyaratnakoṣa’ was published by Bharatiya Vidya Bhavan in 2010 and another work was published by Maharashtrarajya Sahitya Aani Sanskriti Mandal, Mumbai, in 2017. Both these are co-authored with Dr. Sandhya Purecha. He has authored a book on Chandasshastra in 2013, which is used as a reference book.  He has keen interest in Ancient Indian Sciences, Manuscripts, Natyashastra, Vyakaranashastra, Chandasshastra, Classical and Vedic Sanskrit literature, Education and real-life applications.