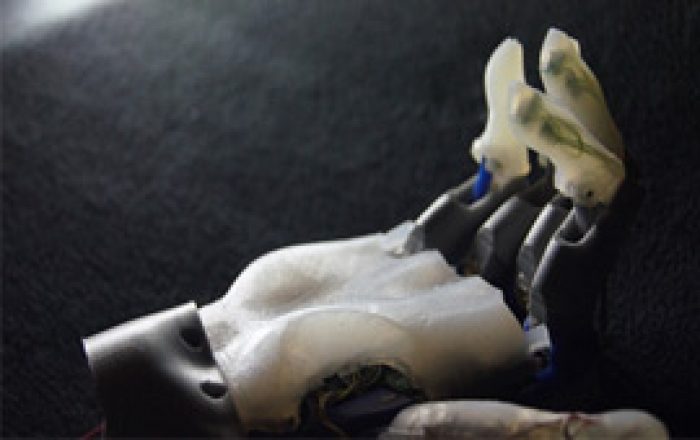 We will be developing durable and affordable 3-d printed prosthetic hands for amputees from rural communities. The prosthetics will be covered with life-like appearing antimicrobial silicone rubber and will be battery powered. We can also modify it to be compatible with various socket attachments so that the existing amputees can easily upgrade to our prosthetics. The system which we are proposing is for trans-radial and wrist disarticulated amputees

Features of the Arm

The proposed system mainly consisting of Data acquisition system, Data Processor and the End Effector. The EMG sensors are connected via Bluetooth to the Processor. The Processor, with the help of a python script, extracts the filtered EMG signals from the sensors. Various features of the EMG signals are extracted. The dataset for various gestures is obtained from around ten peoples. The classifier is trained on this dataset and tested.

The classifier will classify the EMG gesture obtained based on the data set and give that as input to the Microcontroller, and it will control the end effectors to perform the required action. The block diagram of the system is shown in Figure 2. Nano Pi is used as the central processor, which receives the EMG signals from Myo armband. After classifying the signal to a corresponding gesture, it sends the command to Arduino. Arduino activates the actuators to perform the correct gesture upon receiving the command from NanoPi.

The funding which we obtained is under the NIDHI Prayas programme, which is supported by DST and managed by SINE and IIT Bombay. The total amount of funding is up to 10 Lakhs for prototype development.

Video Analytics based Identification and Tracking in Smart Spaces