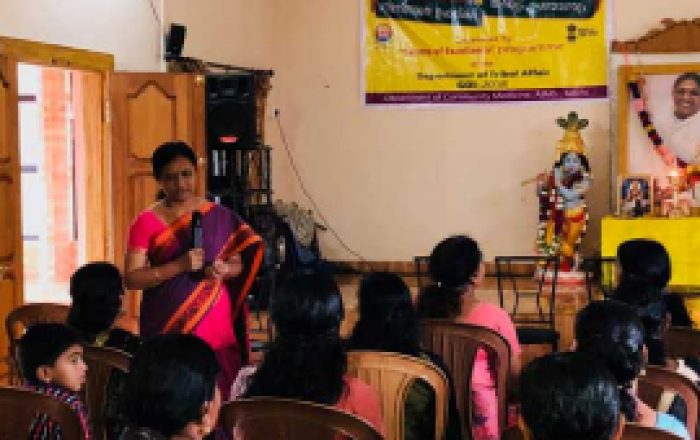 The Ministry of Tribal Affairs, Government of India, has declared Amrita Vishwa Vidyapeetham as a Center of Excellence in Tribal Empowerment  (Tribal CoE). This multidisciplinary center has faculty expertise from various Amrita departments.

The Use and Abuse of Oral Contraceptives is a current collaborative effort between Amrita Center for Research in Analytics, Technologies & Education (AmritaCREATE) and Amrita Department of Community Medicine.

Kerala has achieved replacement level fertility (i.e. the level of fertility at which a population exactly replaces itself from one generation to the next); however, the last census (2011) has recorded a 1% increase in the percentage of indigenous population in Kerala. The tribal population, known as the Scheduled Tribes (ST), comprises the various aboriginal ethnic minorities concentrated in hilly lands. Tribal societies, in general, are considered more egalitarian, women have more labor participation and mortality is slower than in non-tribal populations. The tribal societies also have a low use of contraceptives and therefore higher fertility than the general population. Studies on contraceptive use among the tribal groups in Kerala are few.

The program targets tribal women and adolescent girls of menstrual age between 15 and 49 years of age.

Major activities included in this study

Design and Optimization of Joint Torque Sensor for Robotic Applications