AMRITA University’s landmark wireless sensor network system for landslide detection deployed at anthoniar colony, munnar, warns of a possible landslide considering the torrential rains that have been falling through this region and the state of Kerala. This wireless sensor system, which is the first in India, has detected certain signals that indicate vulnerability of this region to possible landslides and the signals have been made available online at the website, and thereby researchers across the world can study the signal variations and patterns on a real-time basis.

On July 21, the data analysis shows increase in pore pressure and also noticeable soil movements. The authorities and the district collector have been notified accordingly and AMRITA has requested the government authorities to issue an advisory to the people of this region to relocate to another area till the region comes back to normalcy in terms of pore pressure and underneath soil movements. A team of researchers from AMRITA are currently working on exact measurement details on site as well as closely monitoring at the data centre in Amritapuri (Kollam) campus of AMRITA University. Any updates would be informed to the concerned authorities from the state of the art Wireless Sensor Network laboratory at Amritapuri.

AMRITA’s system which is deployed at anthoniar colony, munnar, Idukki district of Kerala, consists of 50 geological sensors and 10 Wireless sensor nodes. The system is functional from june 2009 in an area which is very prone to rainfall-induced landslides. In the past, landslides at munnar have caused considerable losses to human life. The deployment of this system has come as a lifeline for this region. This technological breakthrough system was developed as part of the research project “WINSOC” (wireless sensor network with self organization capabilities for critical and emergency applications), which is co-funded by INFSO DG of European commission. The project consist of a consortium of 11 partners from 8 different countries. AMRITA University and ANTRIX (the commercial arm of indian space research organization) are the only partners participating from india, and all other partners are from Europe.

This system can also be suitably modified for applications to gas leakage detection, avalanche and large scale temperature field monitoring (forest fire detection). Within the next 3 months , AMRITA has plans to extend this network to 150 geological sensors and 25 wireless sensor nodes as part of the research funding provided by Department of Information Technology of the Government of India. These sensors will also be deployed at various sensitive locations in other parts of the country. Dr. Maneesha V Ramesh, head of the centre at amritapuri campus and the principal investigator of this project, is currently in Canada touring universities, and in fact was able to analyze all of the signals live on the internet to arrive at landslide possibility.

In the WINSOC approach, sensor nodes communicate with their neighbors to arrive at a consensus on what has been sensed, developed by INFO. The network then finds the best path through the available nodes to relay this information to the control centre.

This biological principle is being tested in the landslide detection system developed by AMRITA. A prototype network of geological sensors has been installed in the Idduki rainforest of Kerala, India, a region vulnerable to landslides in the monsoon season.

A prototype wireless sensor node has been developed as part of WINSOC project. SELEX has already sent approximately 15 nodes to AMRITA and CCSS. These nodes will be integrated, deployed, tested and verified in both landslide detection scenario and forest fire scenario.

The Wireless Node is composed of three principal entities:

The node satisfies different environmental requirements (temperature, humidity, salty fog, rain, sand and dust; shock, fall and vibrations; electro-magnetic emissions) as the ones specified in many standards defined by ETSI, IEC and others. The node interacts with sensors by means of an external board (called Expansion Board) whose task is to adapt different sensors’ outputs to the RS485 serial bus of the Winsoc Node.
A subset of nodes have been developed with miniaturized antennas instead of dipole ones. Selex Communications has been responsible for the development of nodes, both from HW and SW point of view.
CCSS has developed the expansions boards and the communication protocol between node and the board. Cea-Leti has developed the miniaturized antennas.

The actual deployment site is in the Idukki district of the southern state of Kerala, India. The existing infrastructure at Munnar provides the infrastructure needed for retrieving geological and hydrological data from the field and the data is transmitted long distant for further analysis. The data received from the geophysical sensors are transmitted through the wireless sensor network which uses a two layer hierarchical topology.

Multiple sets of geophysical sensors are located in a distributed manner inside a column, called as sensor column. The sensor columns are approximately 20-25 meters long, are buried deep inside the earth and the data from them are retrieved using lower layer wireless sensor nodes (Crossbows MicaZ motes or WINSOC nodes) attached to the sensor columns. The lower layer wireless sensor nodes are wirelessly connected to a hierarchy of upper level wireless nodes that forward the data on to a Gateway. The data is then sent via a directional Wi-Fi link to a Field Data Management Center (FMC). The data is then forwarded over a satellite link to Data Management Center (DMC) which has sophisticated landslide data processing and modeling capability, located at Amrita University, Amritapuri campus situated approximately 252 kilometers away from the deployment field.

AMRITA wireless sensor network system for landslide detection has been developed as part of the research project WINSOC ( Wireless Sensor Networks with Self-Organization Capabilities for Critical and Emergency Applications) which is co-funded by INFSO DG of European Commission. Further details about the project can be seen in the website.

Landslide laboratory setups have been created at Amrita for cooperative use with the wireless sensor network deployment in detecting and predicting landslides. This landslide setup has two main purposes:

The same sensors as used in the field deployment are also used in the laboratory setups, with an emphasis placed on the pore water pressure meters and dielectric moisture sensors. The sensors used in the laboratory set up collects the changing soil hydrology information at the different areas and depths in the test setup at different times. This information can then be input into the mathematical landslide simulation models for the hydrology inputs.

The experiments conducted in the laboratory set ups will provide key information regarding the behavior of the slope at Idukki under various hydrology and stability conditions and the properties of the soil at the deployment site, as well as increased understanding of how landslides occur with this soil type. Using these laboratory results, based on physical measurements in Munnar, combined with geophysical landslide thresholds derived from earlier experiments, warnings to the local inhabitants could be given via the remote warning system.

The medium lab setup measures two meters long by one meter wide by 0.5 meters tall and holds around 0.6 meters3 of soil. It has two main modes of testing. In the first, the soil is packed into the lab setup along with the associated sensors for the experiment. Water is then added in the form of rainfall or seepage, until the slope fails (provided conditions were sufficient for slope failure). In the second type of test, the soil will be saturated to a predetermined level and the entire assembly will be slowly tilted. The angle at which the slope fails will be used to determine many characteristics of the soil at that hydrology state, such as cohesion, friction angle, and others.

The large scale landslide laboratory setup operates in a similar manner as of medium scale laboratory set up, except on a much larger scale. This setup measures 4.6 meters long by 2.6 meters wide by 2 meters tall and is designed to hold approximately 12 cubic meters of soil. In this setup, up to 24 tonne’s of soil can be tested, at a maximum depth of up to 4 feet. Here, the soil can be tested in more lifelike conditions with an increased distance between the slip plane and the boundaries of the lab setup. Similar seepage and rainfall simulators as developed for the medium lab setup are also implemented here. There are again two modes of testing, one for static slopes in which seepage and rainfall flow is added, and the second for relatively static hydrology conditions and a variable tilt.

CCSS implemented a computer simulator that emulates the spread of a fire through a forest. The simulator also mimics a sensor network designed to monitor and alert of forest fires. Sensors have been placed in a forest in the Czech Republic to detect and locate sources of heat and smoke.

The WINSOC kick-off meeting was held on 14-15 September 2006 in Rome at Selex Communications headquarters. In these two days of meetings, project partners discussed the work packages as well as reporting activities and deliverable review strategies. The EC Officer opened the sessions explaining different issues related to contract and financial matters, including how to prepare audit certificates and how to tackle reports and review processes. Further, the partners decided the composition of the Steering Committee which has been reported in the Project Quality Plan – the first deliverable. Following this, the project was presented by the different participants engaged; the presentation included an overview of project scientific & technological background and foundations, work package descriptions, manpower and finance, as well as the partners profiles and their role in the project. Further exchange of information on landslides and fire detection requirements was agreed between both partners CCSS – Czech Centrum for Science and Society and Amrita University (India). Finally, the next steps and immediate actions were decided, including the completion of the first deliverable – the Project Quality Plan, designing a logo and building the project website. The next meeting will be held in Lausanne – Switzerland, at the EPFL – Ecole Polytechnique Fédérale de Lausanne, by mid January 2007. 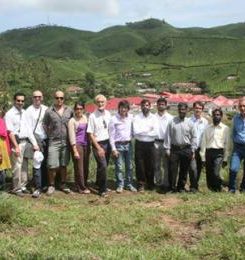 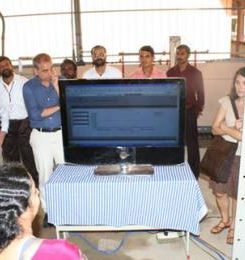 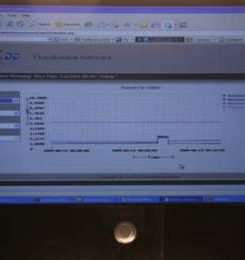 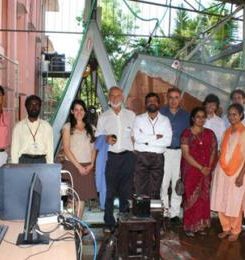 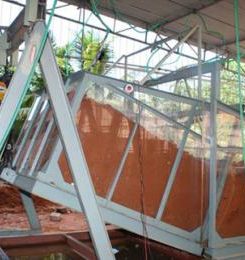 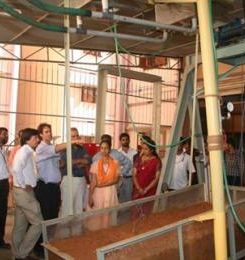 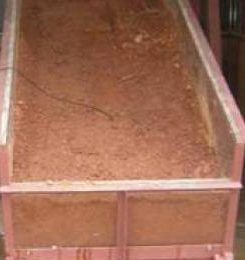 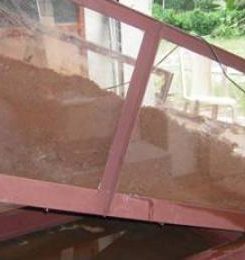 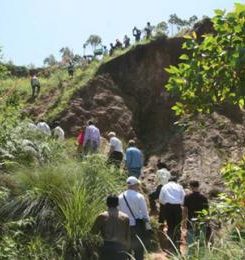 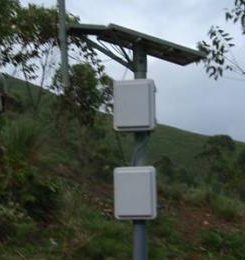 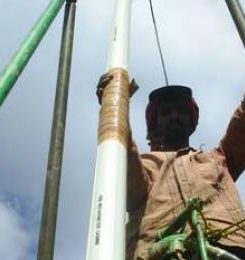 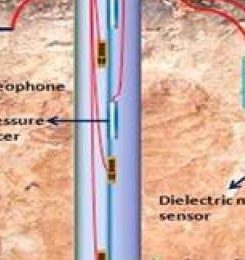 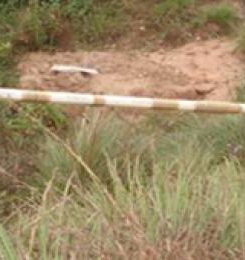 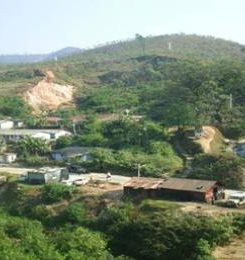 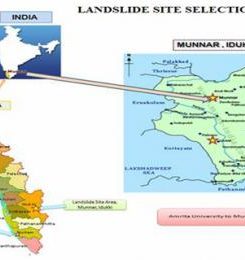