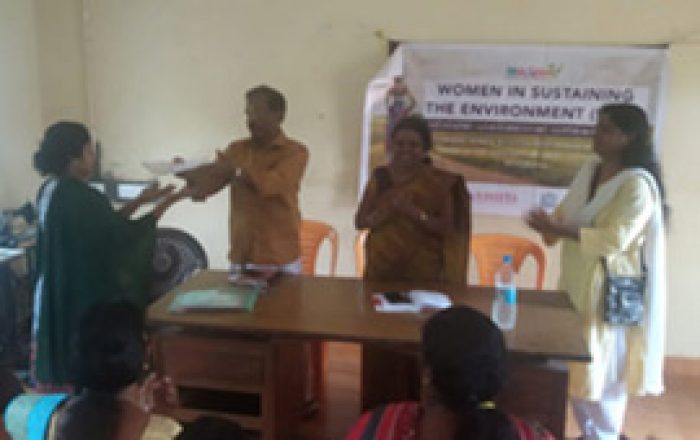 “Women in Sustaining the Environment” (WISE) is a research project between Amrita and Tel Aviv University, funded by the Consulate of Israel to South India (Bengaluru). The WISE project promotes women’s empowerment and sustainable water governance by supporting women’s participation in the choice, maintenance, and management of natural resources along with other sustainable development practices.

The environmental impact of the Kerala floods has been significant. Top soil in most affected areas has been completely washed off. The dwindling tree cover that barely held the top soil in place has been drastically reduced, triggering and triggered by landslides. Rivers and ground water sources have been polluted by debris, human and animal carcasses. The Western Ghats was already deemed a fragile ecosystem, and fauna like snakes that were washed out of their habitats and survived the deluge were slaughtered by the thousands in fear and desperation to reclaim property. This post-disaster scenario, if not addressed sustainably, can only lead to larger disasters in the future.  Experts proclaim that Women’s Empowerment is the key to true sustainability. Traditionally, rural women are the natural caretakers of the environment. They often tend to their families, livestock, fields, water sources and even the forests that surround the village thereby effectively protecting the entire ecosystem on which the community subsides. The monitoring and maintenance work women do in their villages is an integral part of sustainability of their natural resources.

The purposes of the WISE project are Amrita University’s Center for Women and Girls’ Empowerment and AMMACHI Labs has been working to address the issues that surround disappearing traditional practices towards sustaining the environment by women with the following ideas: By recognizing and financially supporting the sustainability work rural women are already doing, we could help to ensure traditional sustainable practices do not die out. To quantify the quantity, quality and use of a resource with the help of technology, that would help provide a basis for measuring economic value. The project proposes to empower women as sustainability officers in their community. Selected women in identified communities will be taught to maintain, monitor and replenish any one natural resource, using latest technologies. If we used water as an example, the women would monitor water levels in their community, water use, and water quality.

In order to achieve these goals, we started by (1) selecting two sites to implement our project. We then (2) carried out various activities and (3) collected initial data regarding these activities. From our activities and initial data, (4) some inferences were made regarding one of the communities. The following text details these four aspects of our work.

While choosing 2 communities out of these eight we considered below criteria.

The image on the left shows the Pamba River that flooded due to the dam water. The river had never dried up before the flood. But in the image (on the right) taken in April 2019, we can see that the river has dried up.

The image on the left shows the Pamba River that flooded due to the dam water. The river had never dried up before the flood. But in the image (on the right) taken in April 2019, we can see that the river has dried up.

Silt that got deposited on the land in Moolakkayam community.

The WISE Implementation team held an interactive video-conference with Dr. Sidney Strauss about tools such as Participatory Capabilities Vulnerability Assessment (#PCVA). Participatory techniques from the PCVA was conducted, that helped us to obtain a clearer picture of the village women’s own knowledge about their assets and their mental models about sustainability.

The PCVA activities included resource mapping, SWOT (strengths, weaknesses, opportunities, strengths) analysis, priority ranking, focus group discussions (FGDs) on what basic needs are met to what extent in the village, FGDs eliciting their mental models of sustainability, and FGDs on possible solutions. The women participated in analyzing their situation and finding their own solutions, which would improve the well being state of the community . Among the village women, potential Sustainable Development Officers (SDOs) were identified who will conduct a Transect Walk and perform Asset Mapping, focusing especially on water, land, energy and waste assets and vulnerabilities.

Three MSW Students of Amrita Vishwa Vidyapeetham, Amritapuri Campus were also part of the project team. The research studies based on the indegenuous knowledge within the community, community resource mapping and mental models of sustainable development were conducted by these students guided by Dr Sophia Von Liere and Dr. Sydney Strauss.

Our team of four researchers and three field staff conducted the PCVA activities for 7-8 days in both communities. 30-40 women of the communities participated in the activities. As presented by Wafa Singh, PRA expert & Social Worker, in Thamarassery (community II), following were the main issues which the team deduced based on the PCVA activities.

The PRA studies revealed that both communities have issue with water quality and its availability. While quality ia a major issue at Angel valley, quality and availability was an issue at Thiruvarppu. The major strength of the communities is their unity and willingness to work together as a group for their community. Based on these we came up with the following plan.

Five ‘real’ capital assets natural, human, physical, social, financial are analyzed through a long walk throughout the village within women’s participation and involvement. In this women had walked with the project team they themselves explained and pointed out their assets and resources, especially water sustainable resources.

Based on the discussion with women group, the team noted down the major changes that the community has gone through from their beginning. Changes like increase in the number of houses, developments like drainage converted to  roads etc were noted down. It is done to find their indegneous knowledge on environment protection.

The women in the community were encouraged to plot down the assets that they are aware within the community. Women in three age groups were asked to draw their village, village assets and resources including five capital assets – natural, human, physical, social and financial assets. The participants themselves drew their village and village resources in a chart given by the field team. This is a PRA technique used to integrate researcher knowledge and community knowledge. It is a group effort where they discuss among themselves to finalise the drawings of the village. It only differs slightly from one group to the other.

In connection with the wise project, we visited Thamarassery Colony, Thiruvarppu Panchayath, Kottayam District and connected a meeting regarding SHG formation. Ms. Soja Gopalakrishnan, Mr. Sasi kumar , Amritasree Coordinator Kottayam District, and Mr. Sumesh, the local support person were also present in the meeting. Meanwhile, we spoke to Mr. Ranganathan , head of Amritasree and he entrusted Sasi kumar, Coordinator, Amritasree to register the SHG under Amritasree. We also understood that under Amritasree, the SHG members can avail medical and economic assistance from Amrita.

Mr. Sasikumar gave an orientation on SHG and also trained the members on Book keeping of SHG. The Thamarassery SHG is named Devi Amrita Self Help Group and is registered under Amritasree and the registration number is ASHG KTM 71. We also identified four Sustainable Development Officers from the SHG.

The Sustainable Development Officers of WISE Project is as mentioned below:

As part of the Clean-up drive, training was given to the Sustainable Development officers (SDOs) in 5S Japanese methodology of Waste management, which comprises:

Out of the above methodology, the first two steps of 5S was successfully implemented on the first day (18.11.2019). The remaining 3 steps will be implemented by the SDOs and villagers of the area in the coming days ahead.

Training on “How to Prevent Communicable Diseases?”

Development of a Lab-on-a-Chip (LoC) for detection of Glucose, Cholesterol and Kidney Function

Presentation on Awareness of Sexual Harassment and Sexual Abuse