FACE It has been an increasingly unprecedented event-happening, taken-by-a-storm century.

Technology and computing have not only changed profusely, but is today growing at an exponential pace feeding on its own fodder.

ACM is an educational and scientific society uniting the world’s computing educators, researchers and professionals to inspire dialogue, share resources and address the field’s challenges. ACM strengthens the profession’s collective voice through strong leadership, promotion of the highest standards, and recognition of technical excellence.

ACM supports the professional growth of its members by providing opportunities for life-long learning, career development, and professional networking. ACM strives to raise awareness of the innovations achieved by computing professionals that enrich our lives and advance our society.

Amrita School Of Engineering/ACM Bangalore Chapter was officially inaugurated on 19th April, 2013 at 2pm at Krishna Hall, New Academic Block, ASE Bangalore. The chapter was officially inaugurated by Dr Srinivas Padmanabhuni, (Vice Chairman ACM India Council and Principal Researcher at Software Engineering and Technology Labs (SETLabs) and Head of the Web Services and SOA centre of excellence in SETLabs in Infosys Technologies Limited, Bangalore, India and by Dr Sangeeta Bhattacharya (Research Scientist in the Parallel Computing Lab (PCL) at Intel, India). At first, the guests and the respected Associate Dean, Dr Rakesh S.G, our Chapter’s faculty Sponsor, coordinators and the audience was addressed by Anirban Gupta, Chair of ACM ASE Bangalore Student Chapter, with the blessings of our respected Correspondent, Brahmachari Dhanraj Swami. This was followed by the lighting of the lamp by Dr Srinivas Padmanabhuni , Dr Sangeeta Bhattacharya, Dr Rakesh S.G, Associate Dean, Prof. G Radhakrishnan, Vice Chair of CSE department and Dr Aniruddha Bhattacharrya, Chapter’s faculty Sponsor and then unveiling of the ACM Student Chapter poster was done by them.

Then, Dr Srinivas drove the point home, by taking interesting topics, such as “What are the Turing Awards”, “Has anyone heard of the ACM Infosys awards”, “How can something such as TCP/IP and map algorithms win such awards” and talking about practical aspects of our life which we so often miss. He made us realise that great things are often born out of simplicity, for example, without something as simple as distributed service algorithms, Google Maps would never have been a success. He showed us how the world has changed, from the era of coding from scratch, to the era of APIs, how lax security has become in key areas of our world.

Finally, Visahavel Parthasarthy, the Treasurer of our Chapter gave the vote of thanks, thus concluding the inauguration of our Chapter.

The first ACM event witnessed by the Student Chapter gained at most enthusiasm and momentum.

The Audience was addressed by the Ram Amuluru and the ACM Chair, Vishwak Thatikonda.

The Distinguished Speaker for the day, Dr. Ashish Verma who is working as a Senior Researcher at IBM Research-India, New Delhi since 1998 and currently managing the Contact Center and Speech Technologies group at the lab spoke on “IT Services Provided” . The talk gave deep insights on topic like contact services ,customer satisfaction data, social media data- social CRM, Analysis engine and tools. It also gave us information on the ticket data analytics, its technical challenges and enterprise data.

The DSP event concluded with a vote of thanks by the ACM Chair and a memento presented by our ACM Faculty Sponsor Dr. Aniruddha Bhattacharjya to the esteemed speaker.

The event was then followed by the Technical Quiz of three rounds. First round was a general pen and paper , with 33 teams participating. Among them, 10 teams made it to the next round. Second round was a ‘crossword puzzle round’ with 15 minutes to solve a Crossword. The highest scoring team made it to the next round. The third round had 4 teams competing. The round was further divided into ‘guess the doodle’,’guess the personality’ and ’buzzer’ rounds which had a tie breaker.

Winners of the event are as follows :

The second ACM event organized by the Student Chapter gained good enthusiasm and response from the audience which were 140 in number. The audience was addressed by ACM co- chair, Sangeeta S. Mr. G.Radhakrishnan,  our ACM Faculty Sponsor Dr. Aniruddha Bhattacharya, Mr.Rakesh N were present for the event.

The talk gave deep insights on topic like Internet security and Smart Grid. It covered important points like integrity check, intrusion detection, big data, Smart grid: framework, its features and vulnerabilities, security and privacy and challenges faced. The session also briefed about SCADA, stuxnet and risk management. It was followed by question and answer session.

The DSP event concluded with a vote of thanks by the ACM Chair, Vishwak Thatikonda and a memento presented by Prof.Tirumala to the esteemed speaker.

Traffic management is a pressing problem for cities around the world. Moreover, it is a highly visible perspective of a city’s life affecting all aspects of its citizens’ economic and personal activities. Consequently, there is substantial academic and commercial interest in addressing this problem.

AI can contribute significantly to traffic management with analytics for citizens(demand side) and operators (supply side) in what is called Intelligent Transportation Systems (ITS). For citizens, we discuss techniques to enable efficient movement of people alone as well as in groups. For operators, we discuss techniques to assess the state of transportation network using available information.

On the 7th of march 2014, ACM Bangalore chapter organized the Distinguised speaker program. As a part of the program, the speaker Dr. Biplav Sivastava was invited by our chapter. Dr. Biplav Sivastava is based out of IBM Research – India at New Delhi, India. His research deals with enabling people to make rational decisions despite real world complexities of poor data, changing goals and limited resources. This has lead to expertise in Artificial Intelligence, Services and Sustainability, where he has proven track record of high-quality innovation in the global business environment. His current focus is on open APIs and data, and their real world usage in enterprise integration. As part of this, he represents IBM at W3C’s working group on Government Linked Data and is active in Data.gov.in circles. Previously, he had explored influential web services approaches in this space. Dr. Biplav Sivastava received Ph.D. in 2000 and M.S. in 1996 from Arizona State University, USA and B.Tech. in 1993 from IIT-BHU, India, all in Computer Science. He has 18 years of experience in industrial and academic research as well as commercial, deadline-oriented, software development in both India and US. Biplav has 100+ research papers published including all top fora in his fields, 23 US Patents issued and 40+ applications.  Biplav actively participates in professional services globally including running the ‘AI in India’ virtual Google group, organizing conference tracks, workshops and as a Program Committee member for more than 50 events. More details can be found here.

The talk provided a good insight on how AI techniques could solve the problem of traffic management in cities and towns accross the world. Mr. G.Radhakrishnan, Vice –Chair CSE Department, our ACM Faculty Sponsor Mr. Aniruddha Bhattacharya, Dr.Rakesh N were present for the event. The DSP event concluded with a vote of thanks by the ACM Chair and a memento presented by our Associate Dean Dr. Rakesh S.G to the esteemed speaker.

Self Managing Data Centres: The next generation of clouds

Amrita School of Engineering Association for computing machinery (A.C.M)  takes pride in having organized a Distinguished Speaker Program on “Self manageable data centre” by Mr. Akshat verma, Senior Researcher, IBM Delhi, on 4TH April 2014. The event was intended to inspire students to delve deep into the applications of Cloud computing in Data management in an enterprise oriented perspective.

The speaker began by defining Cloud server as software defined environment underlying between server and project. He further classified cloud into three divisions namely Computing, Storage and Connectivity of data.

He then spoke about the three layers of cloud server i.e.:

He later moved on to the architecture of cloud server which comprises of three blocks namely Application, Framework and Operating system and continued on with ‘Server isolation’ – a procedure which enforces a network policy requiring specific server computers that are domain members to accept only authenticated and secured communications from other domain member computers. He reiterated that isolation is done when servers are connected in parallel and to achieve the simultaneity in operating systems.

The session picked up pace when he gave ‘Live migration’ as a solution to optimize the utilization of hardware. He elaborated on it as the movement of a virtual machine from one physical host to another while continuously powered-up and its advantage as resolvability of potential problem before disruption of service, when an imminent problem is suspected.

He subsequently mentioned ‘Hypervisor’ as a hardware virtualization technique that allows multiple guest operating systems (OS) to run on a single host system at the same time by sharing the hardware of the host computer.

He then manoeuvred into the concept of ‘Cloning’ which is creation of virtually simulated servers through a snapshot. Cloning not only provides automatic manipulation and up gradation but also facilitates content examination, comparison, and transfer without having to boot the server. He intriguingly asserted that a distant host server can be repaired virtually by replacing its IP address which can be achieved only through cloning and named the process as mutation.

He concluded by affirming that the sole significance of cloud server lies in its dynamism i.e. agility to accommodate as many as 10,000 servers on one site. Consequentially, as more servers are added the performance, patching and ease of troubleshooting & upgradation is complexified. 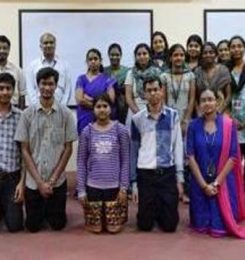 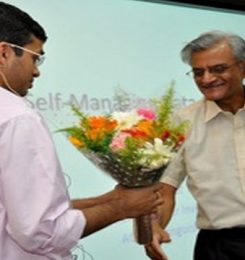 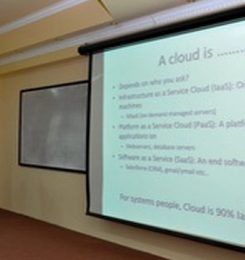 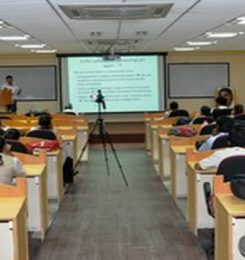 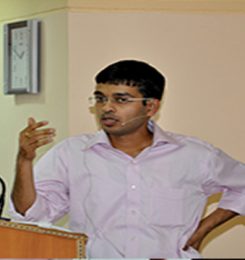 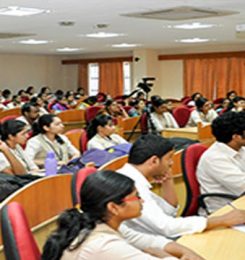 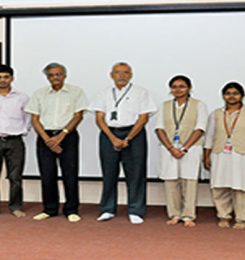