Amrita Vishwa Vidyapeetham has emerged in the Top 100 universities in the world in the just released Times Higher Education (THE) Impact Rankings. Holding 81st rank, Amrita is the only university from India to appear in the prestigious top 100 list.

THE’s Impact Rankings rate universities against the United Nation’s 17 Sustainable Development Goals (SDGs), which are global goals adopted by all UN member nations to improve life for all people in the world and protect the planet. They attempt to document evidence of the impact that universities have upon the society, in addition to their research and teaching performance.

Notably, Amrita has been ranked No. 5 in the world for furthering SDG4 (Quality Education) and No. 8 for SDG5 (Gender Equality). The varsity was also ranked 37th for SDG3 (Good Health & Well-Being); 52nd for SD6 (Clean Water & Sanitation); and between 101-200 for SDG 9 (Industry, Innovation & Infrastructure) as well as SDG17 (Partnership for The Goals).

“Times Higher Education are delighted by the performance of Amrita Vishwa Vidyapeetham in this year’s Impact Rankings,” said Duncan Ross, Chief Data Officer, Times Higher Education. “Their commitment to core humanity, that lies at the heart of the UN Sustainable Development Goals, shone through in their submission. India has a huge role to play in delivering a sustainable future for the world, and the work that its universities do, as exemplified by Amrita, is vital.”

Added Ramu Damodaran, Chief of United Nations Academic Impact: “To Chancellor Amma, and all who work with her at Amrita Vishwa Vidyapeetham, our gratitude and congratulations for their stellar performance in THE Impact Rankings for realizing the UN’s Sustainable Development Goals. Amrita joined United Nations Academic Impact in hosting an event in July 2015 for distinguished scholars to discuss the direct connection between academic research and the ‘dignity and worth of the human person. Thus, the premise of the UN Charter was dramatically affirmed.”

Said Dr. P Venkat Rangan, Vice-Chancellor, Amrita Vishwa Vidyapeetham: “Our Hon’ble Prime Minister started the ‘Institute of Eminence’ program to put Indian educational institutions within the top 100 universities in the world in 10 years. We are therefore very happy that Amrita University has found its place in the top 90 universities in the world in THE Impact Rankings. This is a testament to the vision of world-renowned humanitarian leader and Chancellor, Sri Mata Amritanandamayi, in setting the dual goals of education for life and compassion-driven research. The recognition would not have been possible but for the untiring efforts of our students and faculty. I am happy with the consistency in recognition to the academic excellence, outstanding faculty, and world-class infrastructure that Amrita Vishwa Vidyapeetham is known for.”

Under the guidance and leadership of its Chancellor, Sri Mata Amritanandamayi Devi, Amrita varsity has a long-standing tradition of focusing its research to uplift the economically challenged and other vulnerable sections of the society. This includes Live-in-Labs®, a credit-based programme through which students and faculty go to rural villages throughout India and, while living in those communities, identify and assess the villagers’ needs and develop and implement viable solutions. With more than 150 projects in 21 states across India, Live-in-Labs® participants have touched the lives of approximately 60,000 rural residents during the past several years, clocking 200,000 + hours in the field working towards sustainable development in rural communities.

Amrita has also drawn acclaim for its adult-literacy programs and provision of Internet literacy in tribal populations. The varsity has India’s first-ever UNESCO Chair on Gender Equality & Women’s Empowerment, runs a massive women-empowerment program, and is home to NIRF’s No 7-ranked teaching hospital that has conducted massive charitable outreach to the poor. The university is involved in a massive program to bring clean drinking water to 10 million people throughout India, among many other such programs.

A renowned humanitarian leader and spiritual teacher, Sri Mata Amritanandamayi is the guiding light and Chancellor of Amrita Vishwa Vidyapeetham. Amma’s concept of education, stress on research and commitment to instilling universal values have come together to shape Amrita Vishwa Vidyapeetham into an institution where the latest advancements and discoveries combine with compassion and service-mindedness.

Amrita’s all-encompassing SDG4 programs follow the vision of providing “Education for Life, not just Education for a living.” In collaboration with the government ministries MoE, MeitY, MoTA and DST, Amrita has been at the forefront of developing platforms and resources to provide free access to Online Labs for schools, Virtual Labs for engineering, Collaboration Multi Media platforms like A-VIEW, Medical Simulations, Language Learning, Adult literacy, vocational education, makerspace and programming for school children, awareness for adolescent health, and the AmritaRITE program for mobile tablet-enhanced education for rural and tribal villages in 21 Indian states.

The Ministry of Tribal Affairs, Government of India, gave Amrita Vishwa Vidyapeetham the title of “Centre of Excellence in Tribal Empowerment through Digital Inclusion,” recognizing Amrita’s significant work to uplift India’s tribal people in the fields of education, health, and e-literacy.

The Amrita Institute of Medical Sciences, ranked 7th in NIRF rankings, created medical history in January 2015 by carrying out India’s first hand transplant. This feat was quickly followed by another hand transplant surgery in April 2015 of a young Afghan soldier. These, along with that of Jith Kumar Saji, are the only three hand transplants ever been done in India.

From late July – August 2018, Kerala was hit by devastating floods and landslides. More than 400 people lost their lives and more than a million were displaced. Amrita Institute of Medical Sciences sent out medical relief teams of doctors and paramedics who provided round-the-clock medical care, conducting dozens of medical camps in hard-to-reach areas and treating thousands of patients. Amrita’s school of medicine is one of the pioneers of cutting-edge research in surgeries, nano materials and has one of the highest applied research publications in the country.

Amrita has been awarded a UNESCO Chair for “Experiential Learning for Sustainable Innovation & Development.” Through this Chair, the university develops a comprehensive framework for academic engagement to build sustainable communities. A nationwide project – Amrita’s Jivamritam Purified Clean Drinking Water Initiative – launched by the President of India, Sri Ram Nath Kovind, aims to install drinking water filtration systems in 5,000 villages and provide clean drinking water to over 10 million people throughout India.

SDG 9: Industry, Innovation and Infrastructure – Top 200 in the World

ARIIA Rankings: Amrita Vishwa Vidyapeetham has emerged as the 4th best university in ARIIA Rankings 2020 in the Private or Self-Financed Universities category, out of 674 institutions. Amrita’s world class infrastructure and focus on applied research has resulted in key patents in Digital Health for Remote & Rural Patients, IoT Wearable Devices for Monitoring Patients’ Health, National Knowledge Network Project and Wireless Landslide Detection Systems. Amrita Center for Industrial Research & Innovation (ACIRI) serves as a focal point and hub dedicated to conducting and promoting industrially relevant research based on scientific enquiry. Amrita Technology Business Incubator is among the Top-5 most prolific start-up incubators in India and has incubated 100+ start-ups and mentored 300+ start-up ideas.

Live-in-labs: Live-in-Labs® is a multidisciplinary experiential learning program that gets students and researchers to directly live in rural communities (labs) and co-design solutions to development challenges, With more than 150 projects in 21 states across India, Live-in-Labs® participants have touched the lives of approximately 60,000 rural residents during the past several years. With participation from more than 30 institutions around the world and nearly 50 departments, schools, and centres at Amrita, students and faculty have clocked in a monumental 200,000 + hours in the field working towards sustainable development in rural communities.

Amrita Vishwa Vidyapeetham has been awarded the No. 1 Rank in the “Technical Institutions” category in the Swachhta Rankings 2017 and 2018, released by the Union Human Resource Development Ministry. Amrita has led the fulfilment of the United Nation’s Sustainable Development Goals through its 101 adopted villages project — Amrita SeRVe — with a focus on sustainable rural development, reduce poverty, promote good health and well-being, provide quality education, and reduce inequalities for the welfare of the tribal community. Amrita’s landslide detection system in is the world’s first IoT system for landslide monitoring and early warning. It was designed to work collaboratively with government officials to avoid loss of life due to landslides. 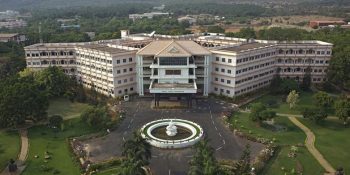 All Amrita Campuses to Remain Closed until further notice

Owing to the government orders due to the outbreak of Corona Virus, all campuses of Amrita Vishwa ... 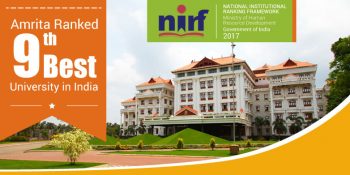 Amrita Vishwa Vidyapeetham has been ranked ninth best among all universities in India under the ... 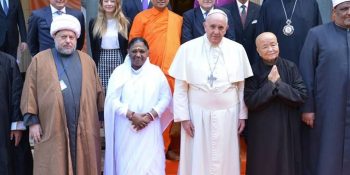 Chancellor Amma along with Pope Signs Universal Declaration Against ...

On December 2, 2014 at the Vatican in Rome, Chancellor Mata Amritanandamayi joined Pope Francis and ...