Amrita was recently invited to present its work in nanotechnologies at the International Conference on Materials for Advanced Technologies in Suntec City Convention Centre, Singapore.

Dr. Shantikumar Nair, Director of the Amrita Center for Nanosciences and Molecular Medicine, was invited to speak at a symposium on Toxicity of Engineered Nanomaterials at the conference.

Graphene is a single-atom-thick two-dimensional allotrope of carbon. A fascinating nanomaterial with unique physico-chemical properties, it has evoked an enormous amount of interest in the scientific world since its discovery in 2004.

Among other applications, it has been proposed as a multipurpose carrier for drug delivery and disease diagnosis.

The nano-bio research team at Amrita, exercising caution, embarked on a series of tests to fully understand the toxicological profile of graphene, prior to recommending any applications in the bio-medical arena.

“Our comprehensive studies showed that irrespective of surface functionalization or hydrophobic/philic character of graphene, it can exert severe toxicity in human primary cells,” Dr. Shanti shared with the delegates at the symposium.

Doctoral student Abhilash Sasidharan made a second presentation at the conference, reporting on an interesting phenomenon wherein ZnO nanocrystals show preferential toxicity in the presence of cancer cells, not affecting normal primary cells.

“ZnO nanocrystals can be a potential nano-therapeutic agent that can de-stabilize cancer,” he concluded. 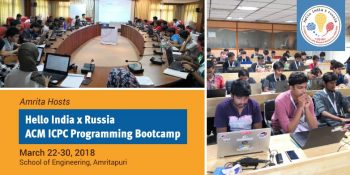 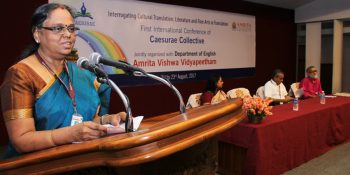 "The Department of English and Humanities, Amrita School of Engineering, Coimbatore, conducted a ...