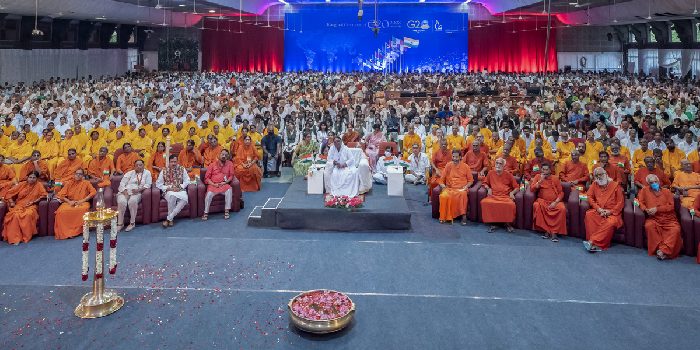 The announcement was made as part of the Inauguration of India’s Civil 20 (C20), an official engagement group of India’s G20 leadership.

Amma has initiated a ₹50 crore ($6 million+) project to support the welfare of people with disabilities and pregnant women who are malnourished. Work will take place in underdeveloped districts across India, as well as in other developing nations. The Ashram will collaborate closely with local Civil Society Organisations (CSOs) with the purpose of bringing about a tangible change in the lives of its beneficiaries. Amma also hopes to establish this as an udahran for efficient and effective systems, which could subsequently be adopted by other CSOs and governments all over the world.

The announcement was made as part of the Inaugural Ceremony of India’s Civil 20 Working Group (C20), of which Amma is Chair. Vijaya Nambiar, a former Special Advisor to the UN Secretary-General Ambassador, is the Sherpa (Principal Coordinator) for India’s C20 and delivered the welcome address as all prepared to take on this massive and vital task.

C20’s purpose is to bring the concerns of CSOs from around the world to the G20 Summit set to take place in New Delhi this September. The Group of 20 (G20) is the premier intergovernmental forum for the world’s developed and emerging economies to address financial stability on a global basis. With India as this year’s host country, the G20 theme is vasudhaiva kuṭaṁbakam—the whole world is one family.

In her address, Amma said: “At this juncture, with almost a quarter of this century completed, what is the state of our world? Close your eyes and place your finger on a map. Now open your eyes and see what continent and nation it landed upon. Wherever it is, find out if that place is peaceful and free from conflict. Is there enough drinking water and food to fulfil the thirst and hunger of everyone there? Is there a roof over every head? And clothes to wear? Is timely healthcare available for everyone? Are the women and children safe?”

In advance of the G20 Summit, C20 will collaborate with hundreds of CSOs from around the world to voice primary and common concerns and to promote sustainable development with the vision of leaving no one behind. A CSO is any non-profit, voluntary citizens’ group that is organised on a local, national, or international level. Task-oriented and driven by people with a common interest, CSOs perform a variety of services and humanitarian functions, bring citizens’ concerns to governments, monitor policies, and encourage political participation at the community level.

“Many civil organisations and individuals are actively engaged in finding solutions and doing humanitarian work. But they are only small rain drops falling into the ocean. But when they fall in the desert, even such small drops have some benefit. If we understand their place and use them accordingly, they can help bring some joy, peace and health to the world,” Amma expressed.

“This is an auspicious occasion. We have embarked on a mission to restore the dwindling light of the world. This is a historic year in which India has received the opportunity to assume the presidency of the G20 nations. The Indian Government and Honourable Prime Minister Shri Narendra Modi have given us the tremendous responsibility of successfully facilitating the process of Civil Society 20. May we be able to do justice to this endeavour.”

Speaking at the inauguration, Tamil Nadu Governor RN Ravi said that community participation is essential for the success of any project, and C20 is playing a key role in ensuring society’s fundamental needs are expressed to the G20 leaders. He explained that today the world is going through increasingly challenging crises and collective actions are now necessary just to survive.

“The world is busy with satisfying sensory pleasures, and at the same time, the world order is based on the fear of military power instead of the love of humanity. This has to change. There has to be a fundamental connection at the core: the way we look at ourselves, the way we look at others, the way we look at nature, Mother Earth, today. With India as host of the G20, the world is looking on us with expectation—a light to show the way forward. We are all here on this Earth. We are all children of Mother Earth. This Earth is not a resource to exploit. It is for peaceful coexistence,” said the Governor.

“Under the able leadership of Amma, I’m sure C20 will come up with practical recommendations because for Amma, her feet are always on the ground. And the G20 will benefit enormously from these recommendations to make this a happy, peaceful and harmonious world.”

Amitabh Kant is India’s Special Representative (Sherpa) at G20 and has also served as CEO of NITI Aayog, the Government of India’s central public policy think tank for the country’s economic development. In his address, he emphasised C20 is a mirror of the dynamic range of activities CSOs must undertake to contribute to establishing India’s G20 Presidency as a beacon of hope, healing, and harmony for the entire world.
Kant said: “With the theme of ‘One Earth. One Family. One Future’, we take on the G20 presidency in this complex and challenging environment. The world today is faced with complex geo-political tensions and conflicts, global debt crisis, issues of food, fuel and fertiliser, climate crisis, slowing progress on the SDGs, meaning that millions of people have lost their jobs and been pushed into poverty. But with India’s G20 presidency, we see these complex challenges as an opportunity for us to get the world to unite and act upon these challenges and to drive global consensus.”

Shashi Tharoor, MP (Congress) and a former UN Under-Secretary General, also spoke at the gathering. Having personally witnessed the power and reach of civil society first-hand, he explained that CSOs are essential for the welfare of the world.

“I would also argue that civil society can and must play a leading role in helping our communities to effectively navigate past and address what we need to do to solve what in my UN days, we called problems without passports. That is the problems across all frontiers uninvited. And that no one country or even a small group of countries can solve on their own,” said Tharoor.

“Problems, in other words, of poverty, of contagious disease, of human rights and human wrongs, of chronic starvation and malnourishment, of massive illiteracy, and of massive displacement. All these kinds of problems are problems that require solutions that also don’t need passports. That also crosses over borders—blueprints without borders to match the problems without passports.”

Anurag Thakur, Union Minister of Sports & Youth Affairs and Minister of Information & Broadcasting, also addressed the inauguration. He emphasised the immense role civil society plays in the development of any country: “This is even more significant in a country like India, which has over a billion population rising and ready to lead the world. The recommendations that come from the C20 working groups will have the potential to impact global policies and programs across many of the dimensions of social and environmental challenges we face today.”

Vinay P Sahasrabuddhe, MP (BJP) and President of Indian Council for Cultural Relations, expressed that C20 must address the challenges CSOs are facing in dealing with the world’s current crises: “Restoring the passion, restoring the credibility, restoring the purity of purpose with which voluntary workers, social organisations should be engaging themselves in the seva of the society, I believe that is going to be the important factor that may perhaps add great value to the global discourse around civil societies, volunteer organisations, and NGOs. I believe, if India as a president of the Civil 20 can show some new path as to how do we do that, it will be a boon, not only for the Civil Society Organisations, but all the social organisations.”

Nivedita Bhide, a core C20 participant with the Vivekananda Kendra, Kanyakumari, said that as an ancient civilisation, India brings a different perspective to the consultations that will take place globally with CSOs: “India has a very unique civilisational depth, as its whole civilisation is based upon the truth of existence, which revered Amma referred to, that is the oneness of existence. The interconnectedness, interelatedness, and interdependance of the existence. And that is why India has got a unique way of looking at diversity, of looking at various issues that are afflicting the humanities….In that we shall also try to, as is the very huge expectation from India, give that additional Indian perspective. That is that any change we desire, it should start from oneself.

Many other dignitaries addressed the gathering. Sri M, Sri M Satang Foundation is another C20 core participant. He expressed that he feels water is one of key issues to discuss, alongside the other societal issues C20 will discuss.

India’s Minister of State for External Affairs, V Muraleedharan, added that Prime Minister Modi envisions a G20 inclusive of all members of society, irrespective of whether they are women or men, young or old, and this can be achieved through C20.

In addition, Kerala’s State Public Education Minister, V Sivankutty, said that G20 is a platform where the world will join hands to face today’s challenges, and that CSOs are the most effective mechanism to reach all levels of society.

As the host country this year’s G20 Summit, India brings to the fore the concept of self-reliance and sustainability, where economic growth, ecological health, personal enlightenment, and social well-being go hand in hand.

In India, civil society has historically remained independent of political powers and is self-supporting in every aspect. This ethos will permeate its C20 activities and contribute to shifting the dynamics between state, society, market, family, and individual from conflict and contradiction to cooperation, collaboration, and compassionate assistance.
Indian philosophical tradition recognises the importance and limitations of individualism and collective action. Volunteerism, which bridges this gap between these two is the essential spirit behind civil society in India. As an ideal, volunteerism, or selfless service, should reflect a sense of personal ownership of one’s surroundings, as well as a sense of belonging.

Beyond this, for volunteerism to have the most positive impact, it requires a genuine passion for reforms and improvement, self-inspired initiative, and creativity in approaches that reflect the complexities of the real world. This also represents a democratic, participatory, and harmonious way of working together.

Volunteerism in India has always been driven by a sense of duty and indebtedness to society. In that sense, this consciousness is in fact beyond government as each individual develops a personal responsibility for ensuring collective wellbeing. This perspective reinforces the role of individual citizens rather than placing the entire burden on the government alone. The C20 in India, will thus focus on a uniquely Indian experience, bringing these aspects to the fore.

After more than 150 official meetings, alongside the countless cooperative efforts that will be made to formulate solutions for sustainable development in the world at this precarious time, the C20 Summit will happen July 30th in Jaipur, Rajasthan. 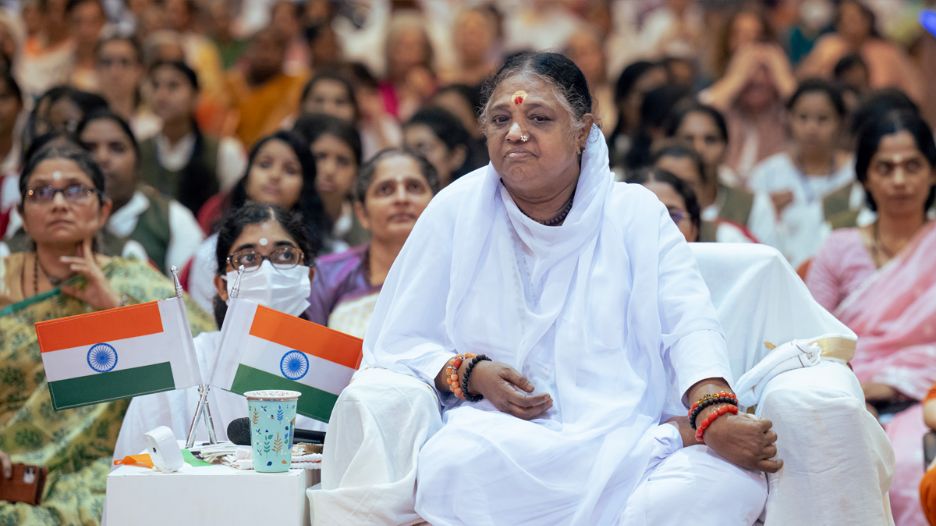 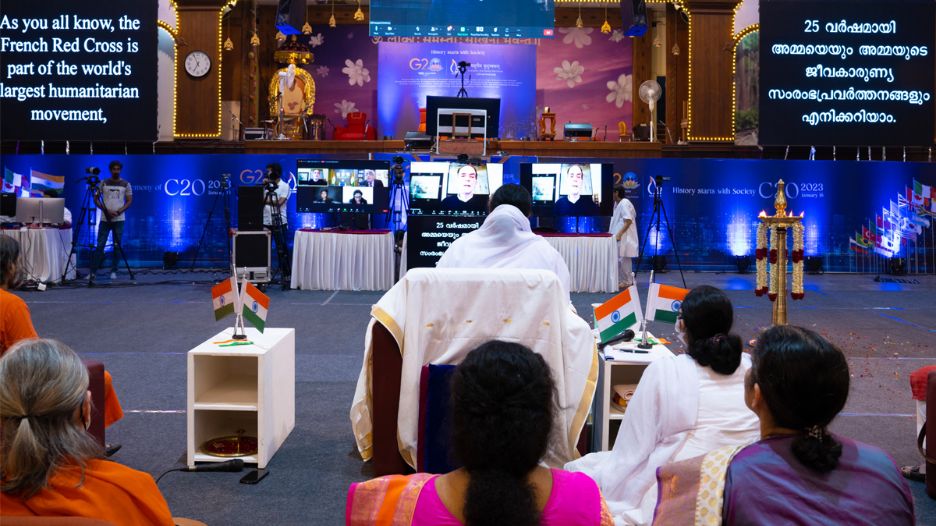 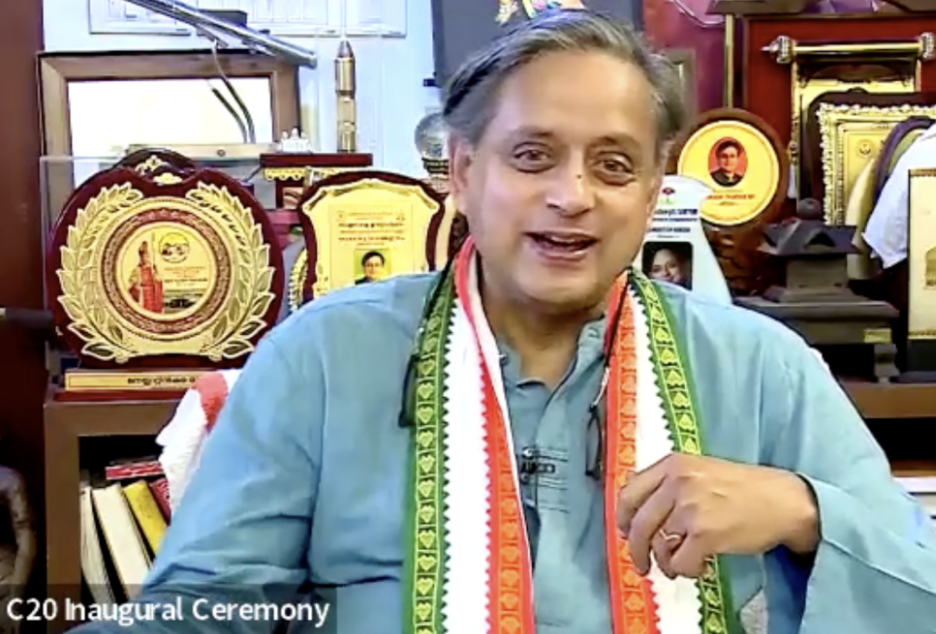 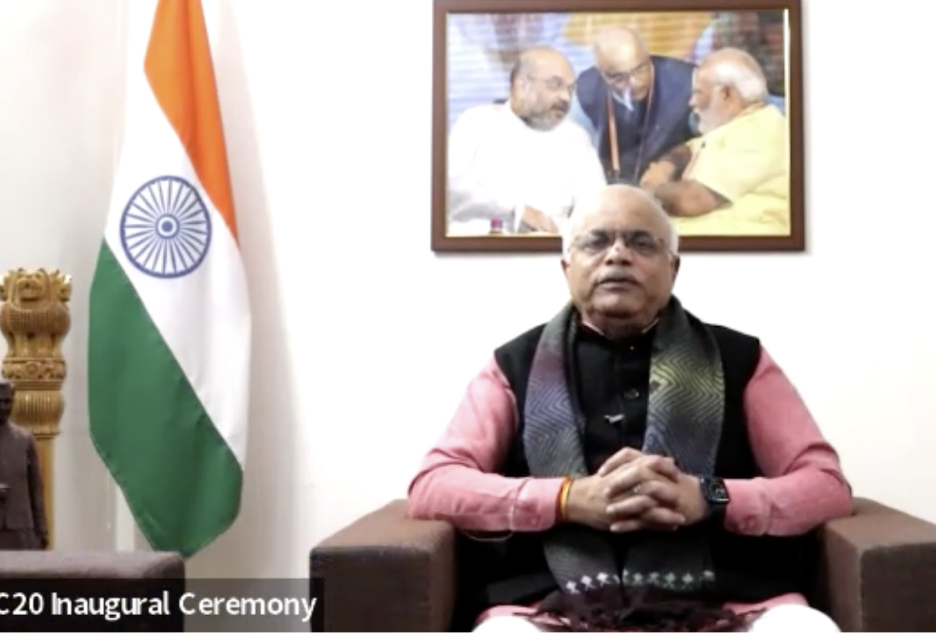 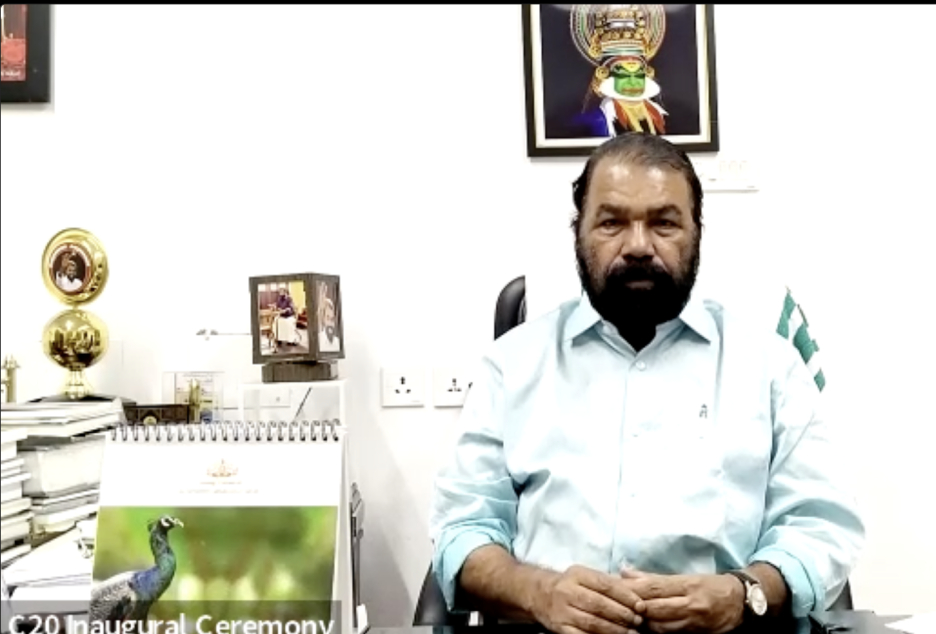 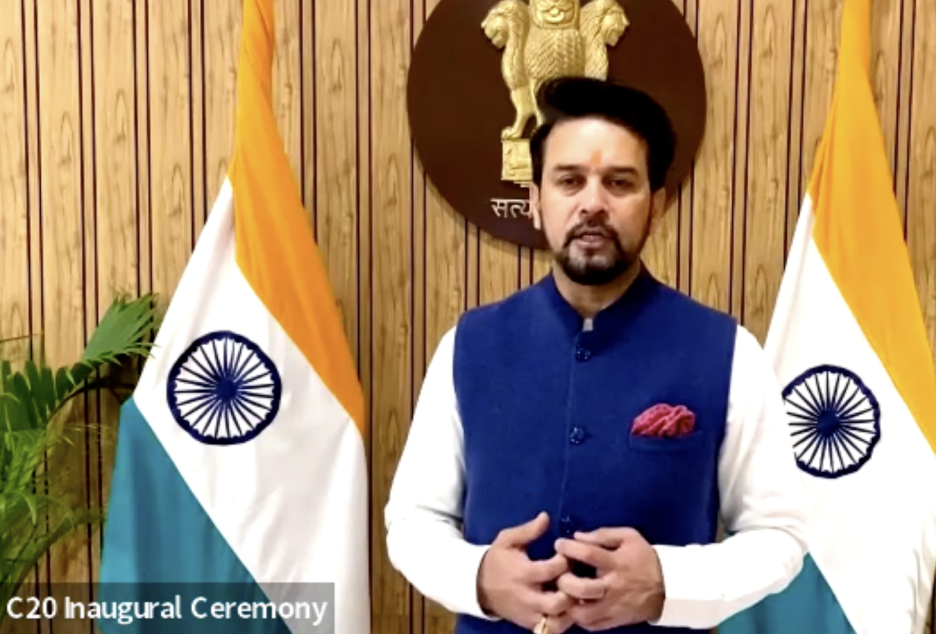 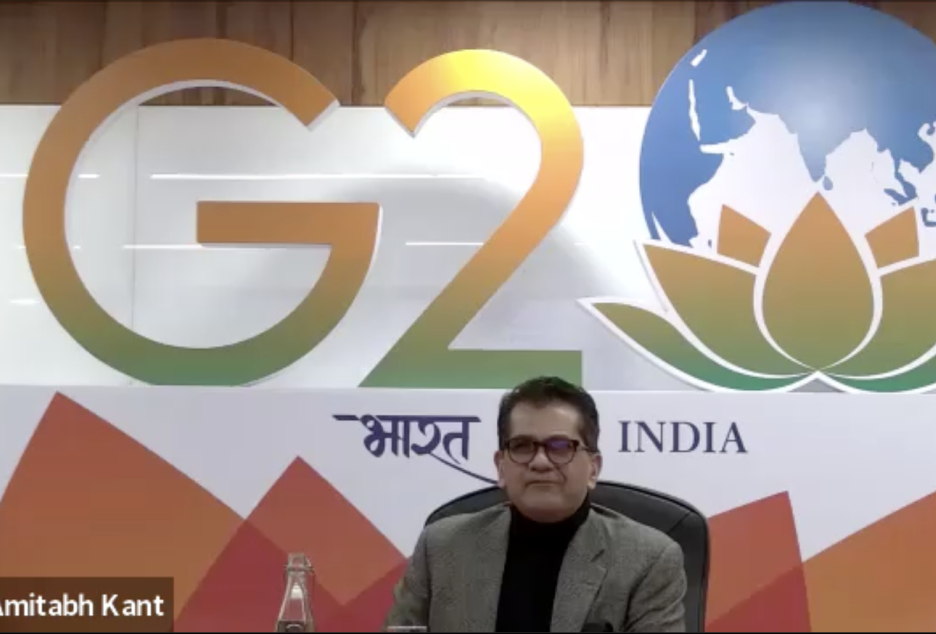 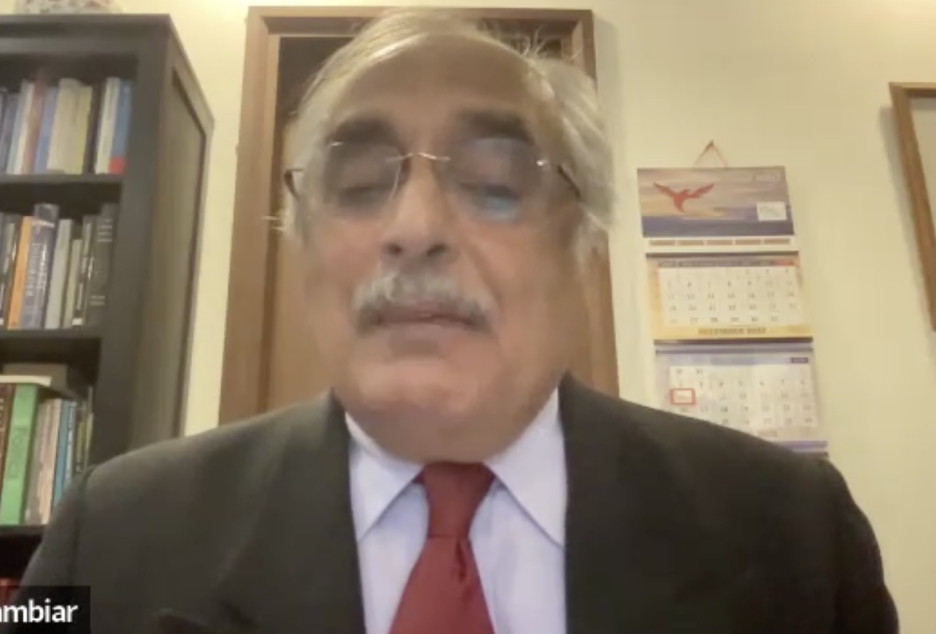 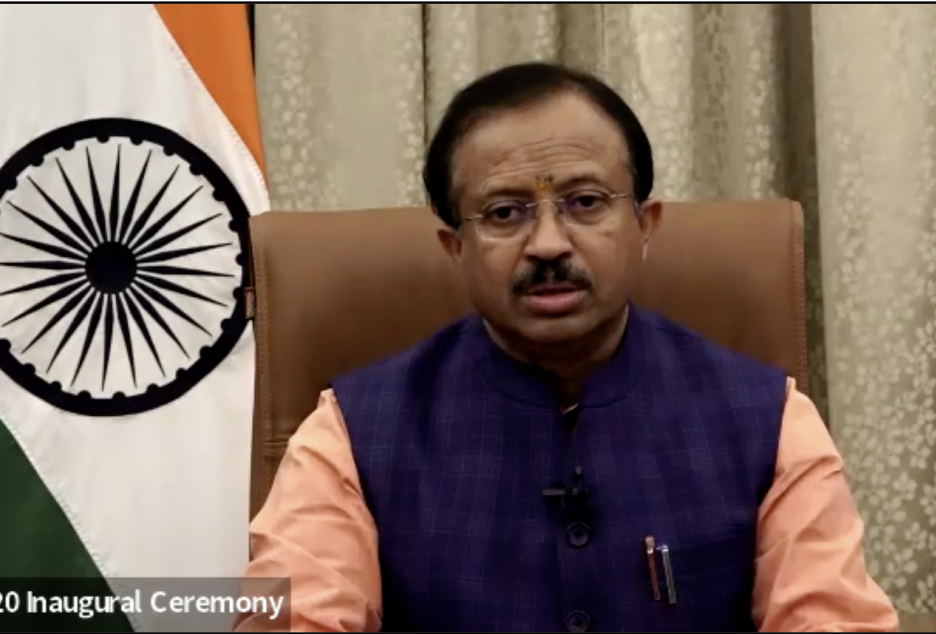 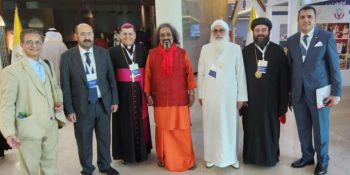 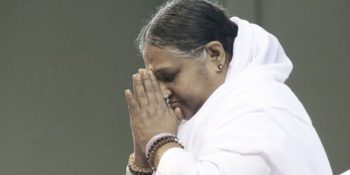 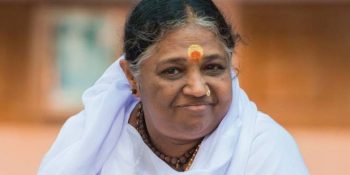 A Message from Amrita Chancellor on the Coronavirus

Amma knows my children are all living in fear of Coronavirus. Amma is thinking of all of you ...