Can you teach a robot to do something simply by showing it how to?

This may be the stuff of science fiction movies, but may also be closer to reality than most of us imagine.

In their recent paper titled, Mobile Robot Programming by Demonstration, Dr. TSB Sudarshan and A. A. Nippun Kumar from the Department of Computer Science and Engineering at Bengaluru, proposed a method that may help this fiction become fact.

“In our paper we propose two new techniques to obtain control code for a mobile robot through programming by demonstration,” explained the authors.

Robot programming by demonstration (PbD) is an important research topic in the area of human-robot interaction. As an end-user development technique, it seeks to teach a computer or a robot new behavior, by demonstrating the task instead of programming it in machine language.

The authors simulated the process in their paper and developed algorithms for teaching robots. Besides, the duo implemented these techniques successfully in a four wheeled robot they built on the ARM-7 platform, the Amrita Autonomous Mobile Robot, AARMoR-1.

“The success of this will lead to the widespread use of personal service robots,” speculated Assistant Professor Nippun Kumar. “It would be like navigating a car using a remote control,” he added.

Nippun traveled to the island of Mauritius during November 18-20, 2011 to represent Amrita Vishwa Vidyapeetham at the 4th International Conference on Emerging Trends in Engineering and Technology, where he presented this paper.

“I was privileged to have the opportunity to present our work to experts gathered in Mauritius,” he stated.

“Being in the company of eminent scholars was a very enriching experience; I learned a lot from them,” he added. 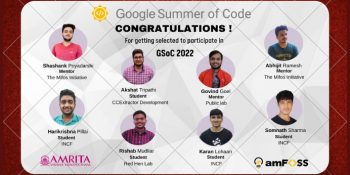 Amrita Students to Participate in Google Summer of Code 2022

Five students have been selected as contributors and three as mentors for Google Summer of Code ... 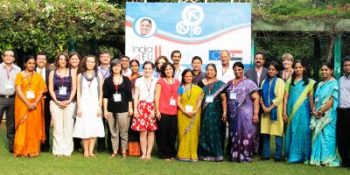 Amrita Vishwa Vidyapeetham was selected to coordinate Indian efforts for the prestigious ...