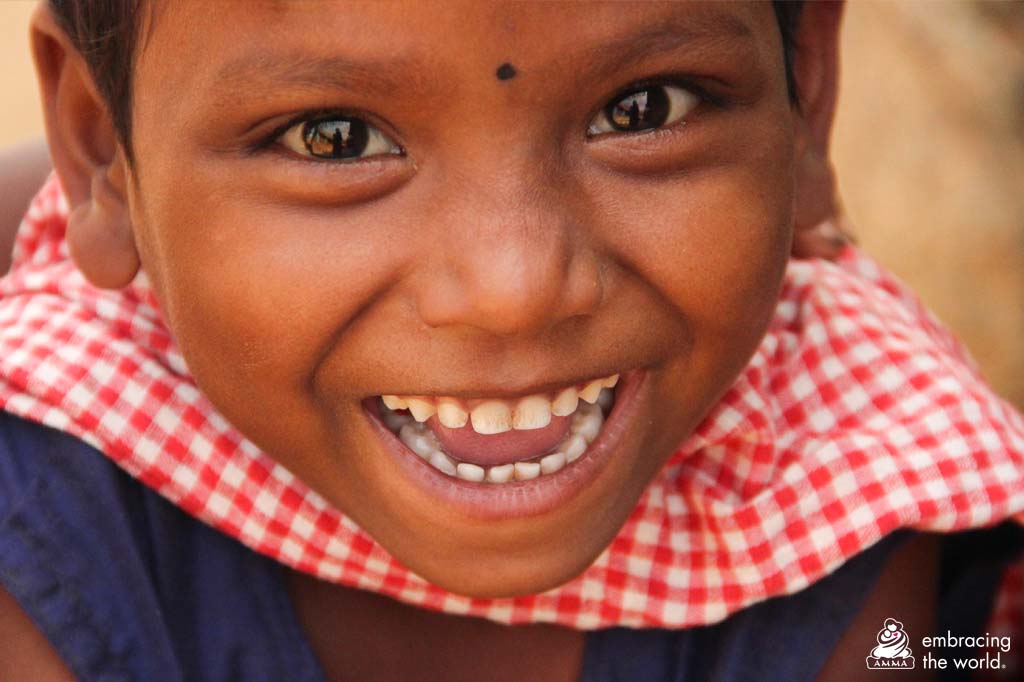 The tribal people of India, known as Adivasis, represent communities that have kept ancient means of livelihood, culture and beliefs. They mostly live in isolated regions and did not become a part of Hindu, Muslim, Christian, or other such societal systems. In the 2011 Census of India, Adivasis made up 8.6% of the population, a total of 104 million people. Tribal people often face serious issues such as endemic poverty and lack of essential resources, such as water, usually due to the results of environmental degradation. Amrita has a long history of projects aimed at uplifting India’s tribal populations, with thousands of people receiving vocational and literacy training. In 2008, the university was presented an award from UNESCO and India’s National Literacy Mission for work in adult literacy with tribal people. Working with tribal children has been a vital focus, as they are seen as gateways to reach the rest of their families. At 41 rural education centers in 21 states of India, Amrita provides holistic educational support that integrates health, social, and gender-equality awareness and inculcates respect for local culture and heritage.

In 2018, the Government of India recognized Amrita’s significant work to support Adivasis when the Ministry of Tribal Affairs gave the university the title of ‘Centre of Excellence in Tribal Empowerment through Digital Inclusion’ (Tribal CoE). It is especially active in the states of Jharkhand, Chhattisgarh, Odisha, Maharashtra, Rajasthan, and Kerala. 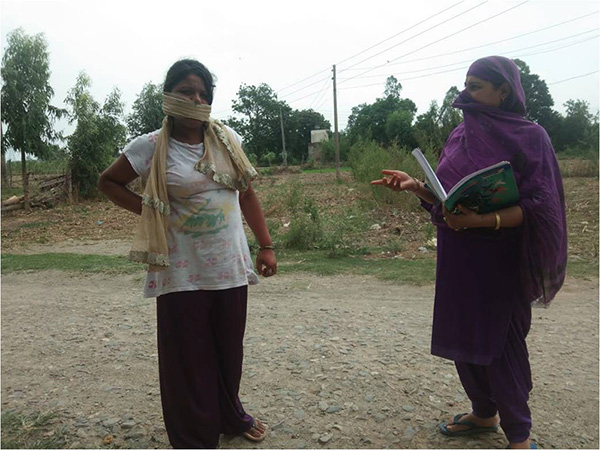 The pandemic meant Tribal CoE take an immediate and crucial lead on supporting people in India’s remote tribal areas. They are communities who usually lag behind in latest developments due to their isolation and traditional ways of life, and the panic and confusion over the pandemic only multiplied that factor. The main challenges were restricted movement due to the lockdown, low Internet connectivity, and poor electricity. The Tribal CoE was able to disperse awareness on prevention and treatment via local village staff, who used mobile technology as a key tool. This included helping migrant workers travelling home from the cities after their employers shut down businesses and forced workers into the streets with little money, food, or water. 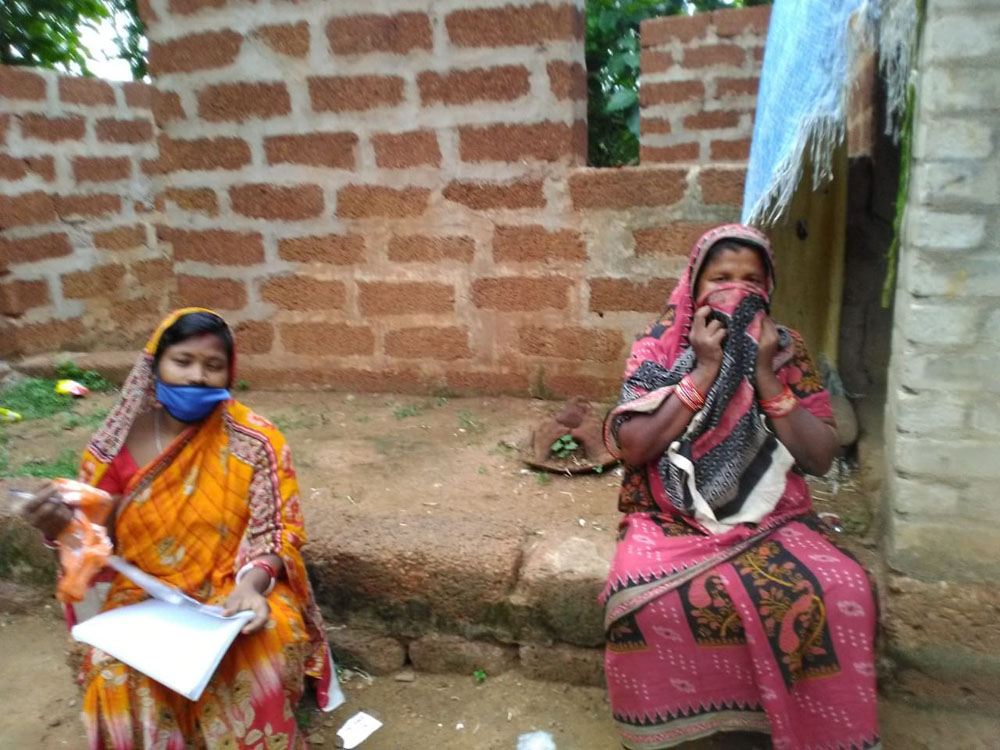 The Tribal CoE aims to improve healthcare in tribal areas by integrating the modern practices of allopathy and ayurveda with the traditional ways of village healers. The teams coordinate with nearby government public health centers (PHCs) to support a holistic approach. The traditional healers are familiar with local medicinal plants and other natural remedies that can strengthen immunity, nutrition and wellbeing. Meanwhile, traditional healers benefit from learning the practices that allopathy and ayurveda can provide when needed. The approach has thus far helped in the prevention and management of common ailments like diabetes and hypertension, as well as supported care for acute illnesses such as diarrhea and pneumonia. 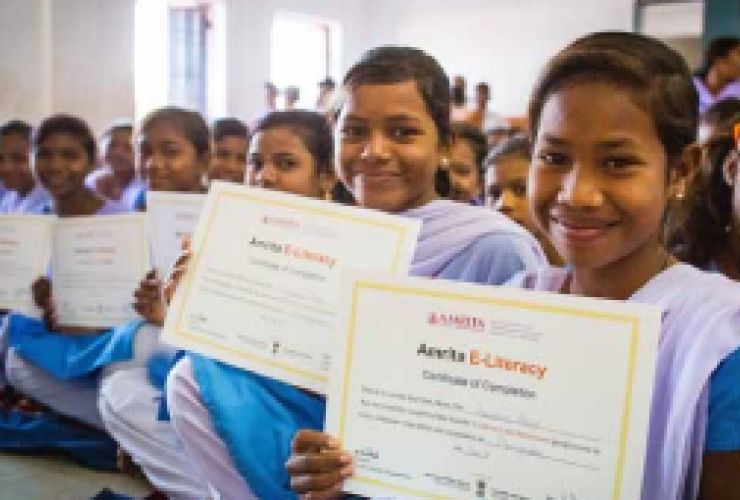 The digital literacy initiative gives basic computer awareness to tribal people with a specific focus on youth. The program provides hands-on knowledge about how to operate a computer and perform simple operations, like browsing the Internet and creating a Word or Excel file, as well as more advanced tasks, such as filling in an online application or booking online train tickets. It employs application-oriented awareness and is often the first time the participants have interacted with computers. 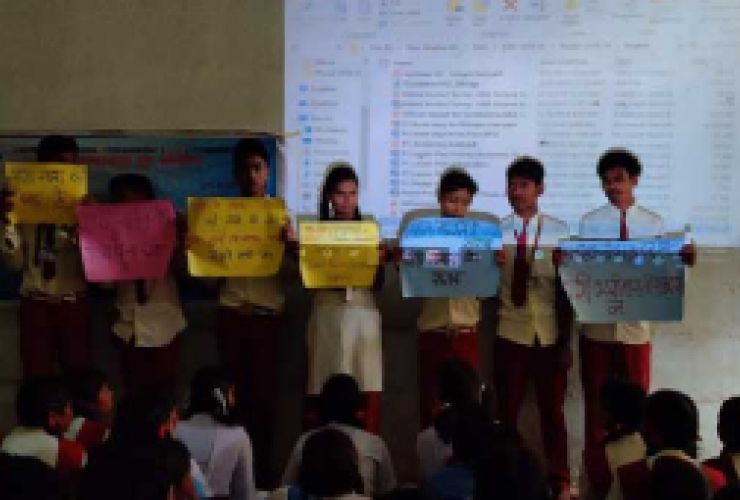 AAA seeks to empower adolescent boys and girls through awareness education, especially on social and health topics. The school-based initiative trains selected student ambassadors to share information about substance abuse, nutrition, and the value of education. The ambassadors engage with their peers and younger children, as well as the tribal community as a whole. Ambassadors conduct programs that use street plays and games to communicate their messages. The primary goal is to encourage change in counter-productive adolescent attitudes and raise the self-esteem of both the ambassadors and the other participants. 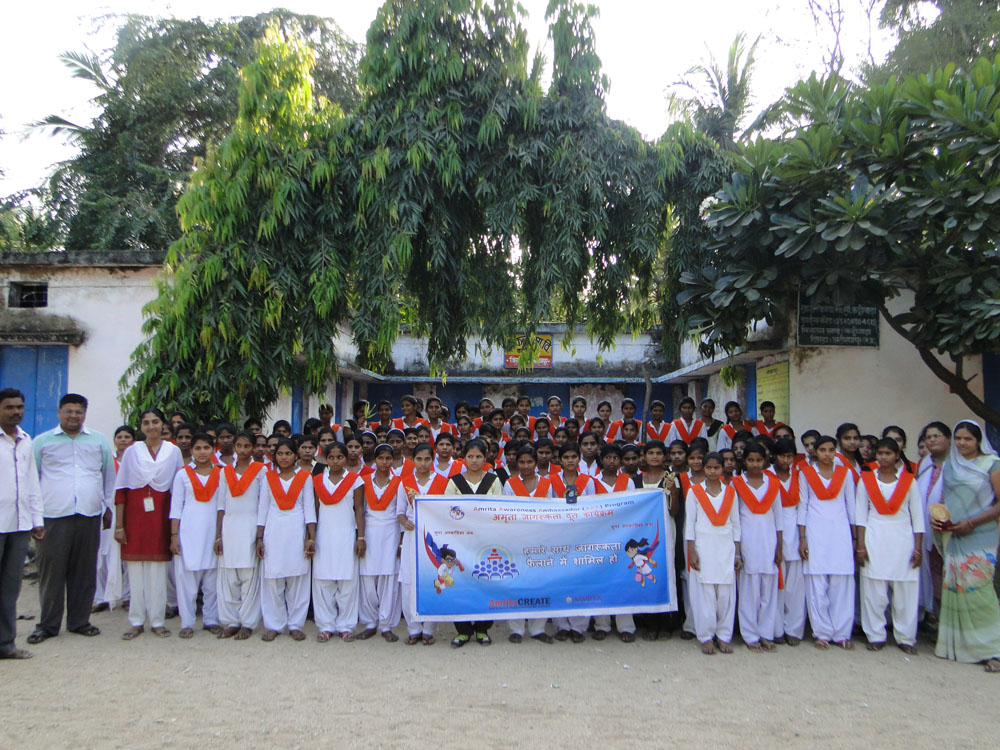 Teaching menstrual hygiene awareness focuses on adolescent girls to address the many misconceptions about menstruation and female health in rural and tribal areas. It also seeks to encourage more sanitary menstrual practices and dispel the taboo that overshadows what is a biologically natural process. The parallel aim is to improve the girls’ health and raise their self-esteem. 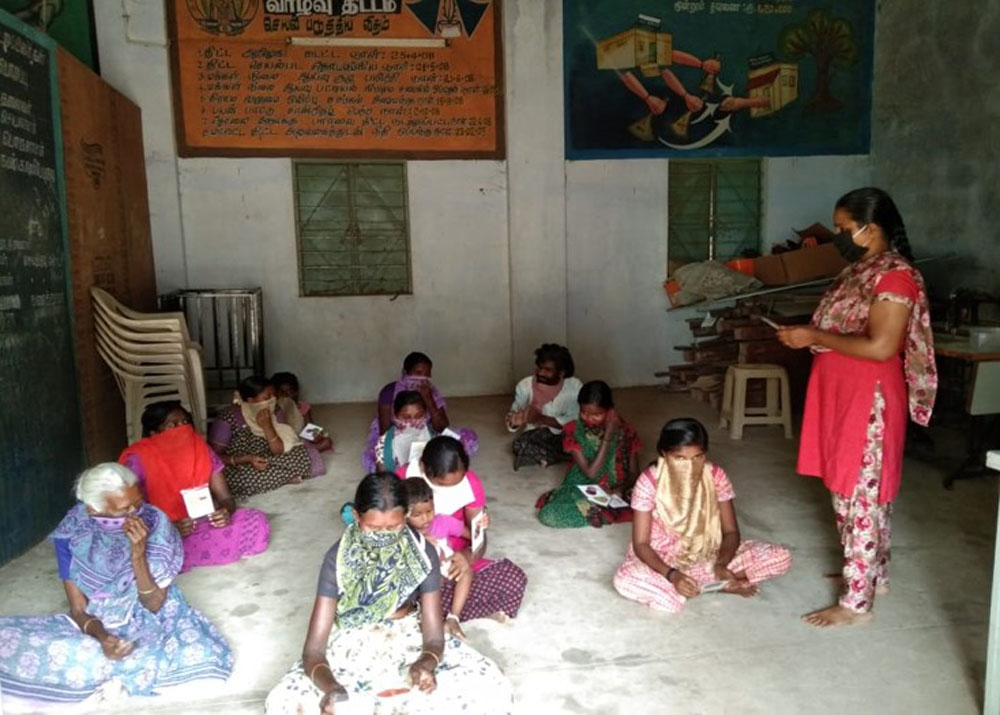 The nutrition awareness program brings attention to the existence of concurrent micronutrient deficiencies in Indian tribal women of reproductive age, a common ailment. The deficiencies are thought to be due to reduced nutrition and dietary diversity, as well as the dying knowledge of ethnic local foods and their significance. The program proposed that educating women would not only support their nutrition and dietary needs, but also raise the health status of families and bring a positive behavioral change to the whole community. 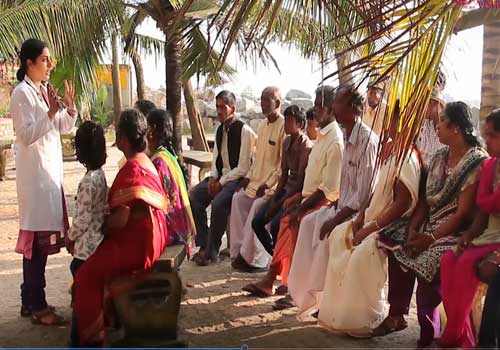 The vaccination awarenes program investigates the degree to which essential healthcare services are available in tribal areas and the prevalence and awareness of common diseases. It aims to recognize abnormal parameters in pregnant women, get help from doctors involved, and ensure follow up. It also provides awareness for the health of children, including vaccinations. The program targets tribal populations in Bastar District in Chhattisgarh and Wayanad in Kerala. 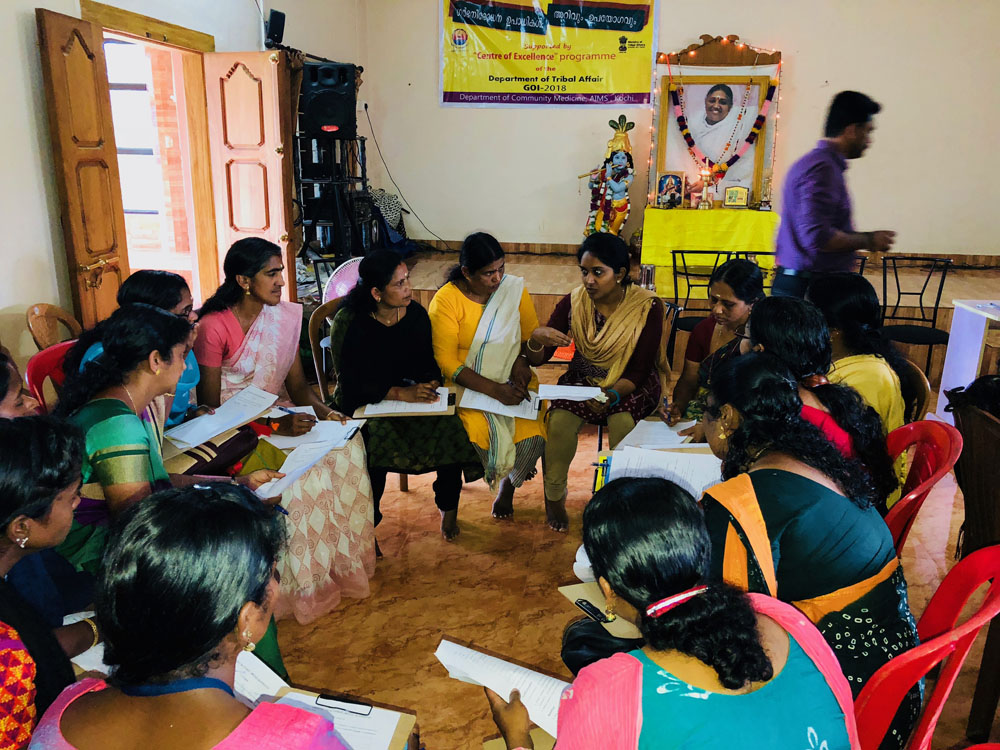 There is an extensive overuse of oral contraceptives in Wayanad, one of the least urbanized districts in Kerala. The abuse of oral contraceptives is reported among adolescent girls and women, as they do not like to go to the traditional “menstrual homes” where they are forced to stay during their period. It is an age-old practice previously common across rural India. Amrita conducted a study to understand knowledge of and the attitude towards oral contraceptive use and to explore the girls’ and women’s fertility intentions. Afterwards, the team organized an educational workshop regarding proper use of contraceptives for the tribal women within their social contexts.