Currently a third-year Ph. D. student in the Daniel Guggenheim School of Aerospace Engineering, Atlanta, GA, Chandrasekaran’s entry – “Recharging” – a photograph of a plasma globe filled with noble gases (such as neon and argon) won the first place. When the high-voltage electrode at the center of the globe is charged, the gases ionize, causing beautiful streaks of light, known as plasma filaments, to form inside the globe.

Chandrasekaran said his graduate research at the Daniel Guggenheim School has nothing to do with noble gases. His research interests are in helicopter design. The award-winning photo was one of many he has snapped since coming to Atlanta. It was taken at the Fernbank Museum last year.

“Noble gases are usually inert, but under certain extreme conditions they interact with their surroundings to form something vibrant and magnificent,” said Chandrasekaran, who studies under professors Dimitri Mavris and Dewey Hodges. “Just like us, noble gases also need the right atmosphere to shine.”

Under Hodges’ direction, Chandrasekaran has been doing research on helicopter rotorblade dynamics. His work with Mavris has focused on reviewing wire strike protection systems that are used by helicopters to avoid collisions with powerlines and other wires in low-fly zones. Over the past semester, he has also begun working with Mavris on a project with Pratt & Whitney to review technologies that have the potential for disrupting jet engine technologies.

Joining Chandrasekaran in receiving top honors were two other College of Engineering students. The second and third place were won by Anna Starr, a second-year major in industrial and systems engineering, for “The First Element” and Nishalini Shanmugan, a first-year major in electrical engineering (with a minor in Spanish),  for “Winter Frost.”

All together, this year’s Art Crawl received art entries from 28 students- all of it inspired by the periodic table or chemical elements. In addition to paintings and photographs, the entries included poetry, drawings, sculptures, and digital art pieces.

Amrita congratulates Chandrasekaran on his achievements and wishes him the best of luck. 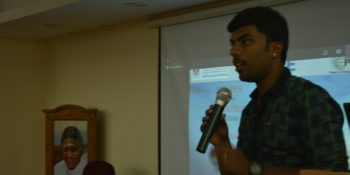 “BRAINSTORM”, an introduction session to PES and IAS, was arranged by IEEE-PES and IAS joint ... 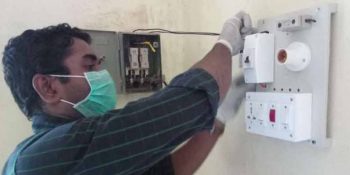