Organized by the American Physical Society (APS), the congress was convened in Denver, Colorado during April 13 -16, 2013.

APS is a non-profit organization, headquartered at College Park, Maryland, USA. Its physics-related activities extend to the fields of academia, research and outreach.

Dr. Shanti’s paper was titled Relativity of Scale: Emergence of Quantum Behavior from Space-Time Geometry and Its Implications.

This Amrita talk was the only presentation from India. It was scheduled in the session titled, Classical and Quantum Gravity.

“My paper shed light on the principles of relativity of scale that relate the nature of the space-time background to the mass and size of a particle relative to the observer,” stated Dr. Shanti.

Originally developed by Laurent Nottale, an astrophysicist and researcher at a French observatory near Paris, the principles of scale relativity attempted to unify quantum physics and relativity theory.

In general, Nottale’s theory developed in the early 1990s has not been widely discussed in the scientific community. Some scientists maintain that Laurent Nottale deserves the Nobel Prize in Physics for postulating this important theory.

“My study showed that quantum behavior can evolve from the dynamic space-time background of general relativity. In principle then, it is possible to construct a complete quantum theory based on general relativity,” explained Dr. Shanti.

His paper was the first in the world to associate the origin of quantum mechanical behavior to the space-time geometry in the local region of very small particles.

“Around sufficiently small particles space-time can be substantially curved giving rise to time dilation and space contraction effects as with particles moving at high velocities. The forces calculated from the space-time geometry are fully consistent with known electromagnetic forces, suggesting that this can be a new approach to unify the quantum world with the macroscopic world governed by general relativity,” stated Dr. Shanti.

“For the simple case of the hydrogen atom, the electromagnetic force and electron charge could be predicted in terms of these changes in space-time geometry,” he further added.

The groundbreaking work was well received by physicists at the meeting. The April 2013 meeting was attended by over 1200 delegates from around the world, including physicists, scientists and journalists. 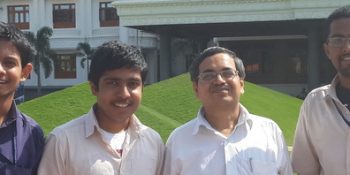 Amma’s Amala Bharatam Campaign continues to inspire many. In this case, four students of the ... 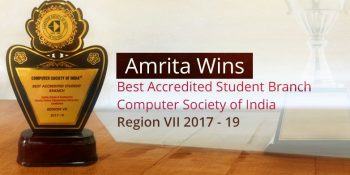