Three students of the 2020-22 batch of the Department of Management, Amrita Vishwa Vidyapeetham, Amritapuri (Kollam), worked as interns at Learnovate, an E-Commerce company based in Pune, which deals with selling and buying books. Sumitha S., Keerthana S. and Megha L. S. worked as interns for a duration of one month and their work spoke volumes as few of them were recognized as the star performers of the month. They were recognized as star performers.

The students were interning in the HR domain and their work involved recruiting and training interns and constantly guiding them. The students started out as interns and gradually they were given new roles and responsibilities as they progressed during their internship. Students were assigned the role of team leaders where they used to monitor the work done by their respective team members and used to arrange webinars and seminars for the interns. The Department of Management is extremely proud of the students for showing their utmost dedication during their internship and thank Mr. Ravi Singh, the founder of Learnovate, for providing students with such a wonderful activity.

The students worked as a link between the founder at Learnovate and the newly recruited interns. Their internship mainly focused on increasing the social interactions between people. This internship provided them an opportunity to nourish their skills and also manage people efficiently.

The Department of Management is delighted with the performance of the students and would like to congratulate them and thank Learnovate for providing the students with such a wonderful opportunity. 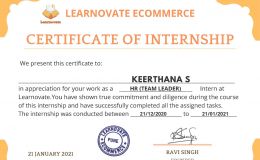 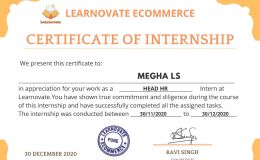 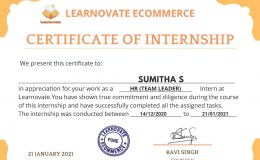