Dr. Sudheesh Manalil, Principal and Head Research, ASA, shared his valuable words regarding the negative consequences of drug abuse. He added that we should combat it in our society as responsible citizens even though we haven’t used it and never intend to use it and explained the importance of awareness about this growing disaster. Followed by, Dr. D. Venkataraman, NSS Programme Coordinator, Associate Professor, Department of Computer Science and Engineering, Amrita School of Engineering, educated the gathering by emphasizing points that would prevent younger generation from drug addiction such as creating association with great people, keeping the mind engaged, being responsible and making good company of friends etc.,

The Chief Guest and speaker of the event, Mr. Venugopal G Kurup, Assistant Director, Narcotics Control Bureau, Chennai Zone shared his immense knowledge on various drugs, consequences of its consumption and the symptoms of drug addiction through his resourceful presentation. It was an eye-opening session, where a whole new perspective of the Narcotics world was understood by the participants. The presentation began with the details on the history of the Narcotics Control Bureau followed by the classification of drugs such as narcotics, psychotropic substances, controlled substances and other substances. He urged us not to fall prey to the temporary relief given by drugs as it was a trap. He explained that the narcotic world is a place where entry is easy but exit is very difficult to find. The speaker gave a clear insight into the reasons that attract an individual towards drug abuse and its impacts on mental and physical health, various signs of drug abuse, and its detrimental effects on physical appearance. The participants were made aware of the various laws and punishments directed by our Government of India to contain drug abuse. He concluded his presentation by stating that “DRUGS” refer to Death Regularized Under Guise of Solace and shared a valuable quote, “Understand your potential and act accordingly to reach success”.

Followed by the chief guest, Dr. N. Udaya Shankar, Campus Director, ASA, shared his experience of losing his good friend who was a drug addict. He guided students to choose the right path and succeed in life rather than being a victim of evil circumstances. He emphasized the importance of family and religious values and good company to prevent us from getting into this danger. He also explained the importance of Karma, self-care, and hard work and concluded by saying we, Amritians, should be role models and pioneers for the future. Followed by his speech, Dr. K. Murugasridevi, NSS Programme Officer, Assistant Professor (Agrl. Entomology), ASA,extended her gratitude to everybody for participating and making the event a successful one. Finally, Wamika of B.Sc. (Hons.) Agriculture 2019 batch delivered the vote of thanks and concluded the session successfully. As a part of this programme, 460 people from Amrita Vishwa Vidyapeetham took the pledge “Say yes to life, no to drugs” of Ministry of Home Affairs, Central Government of India and received the certificates. 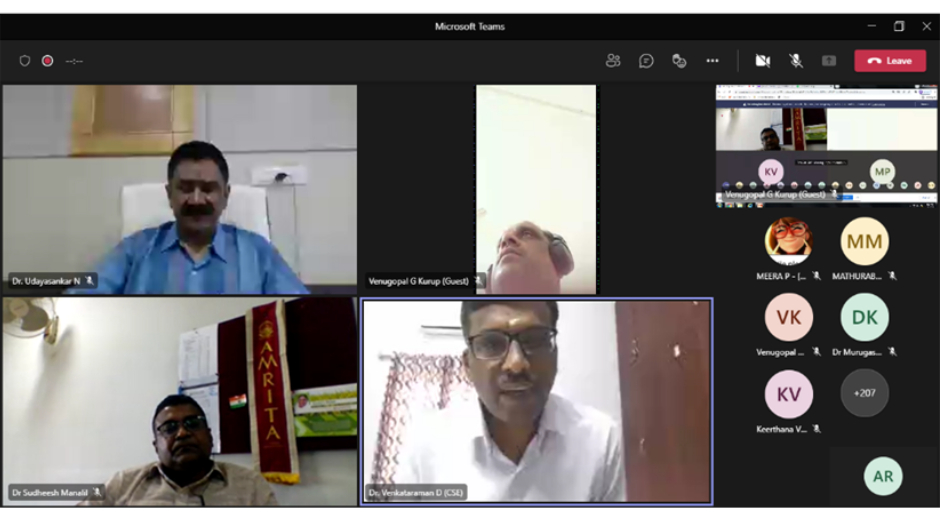 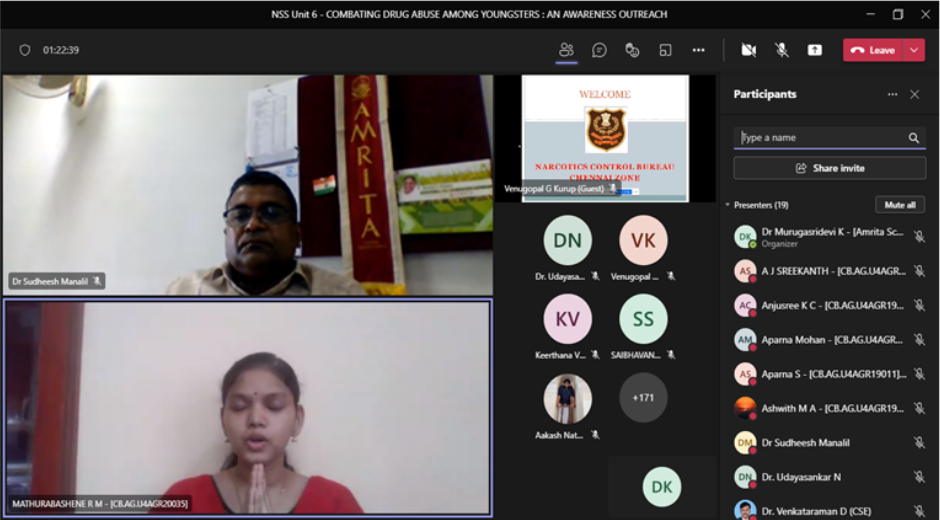 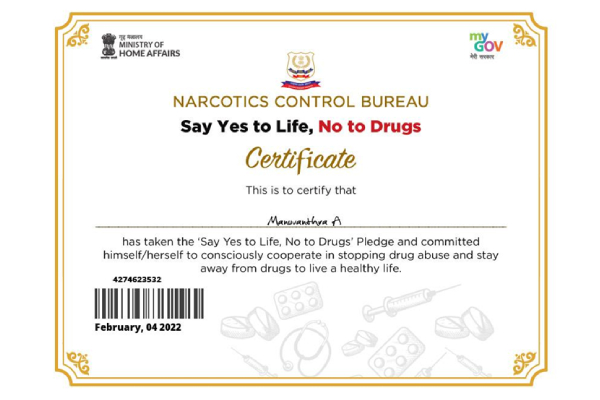 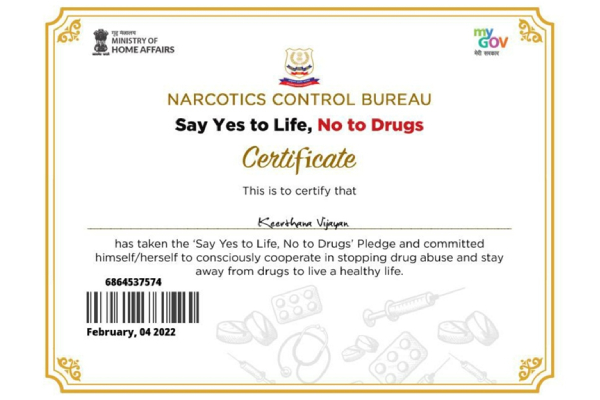 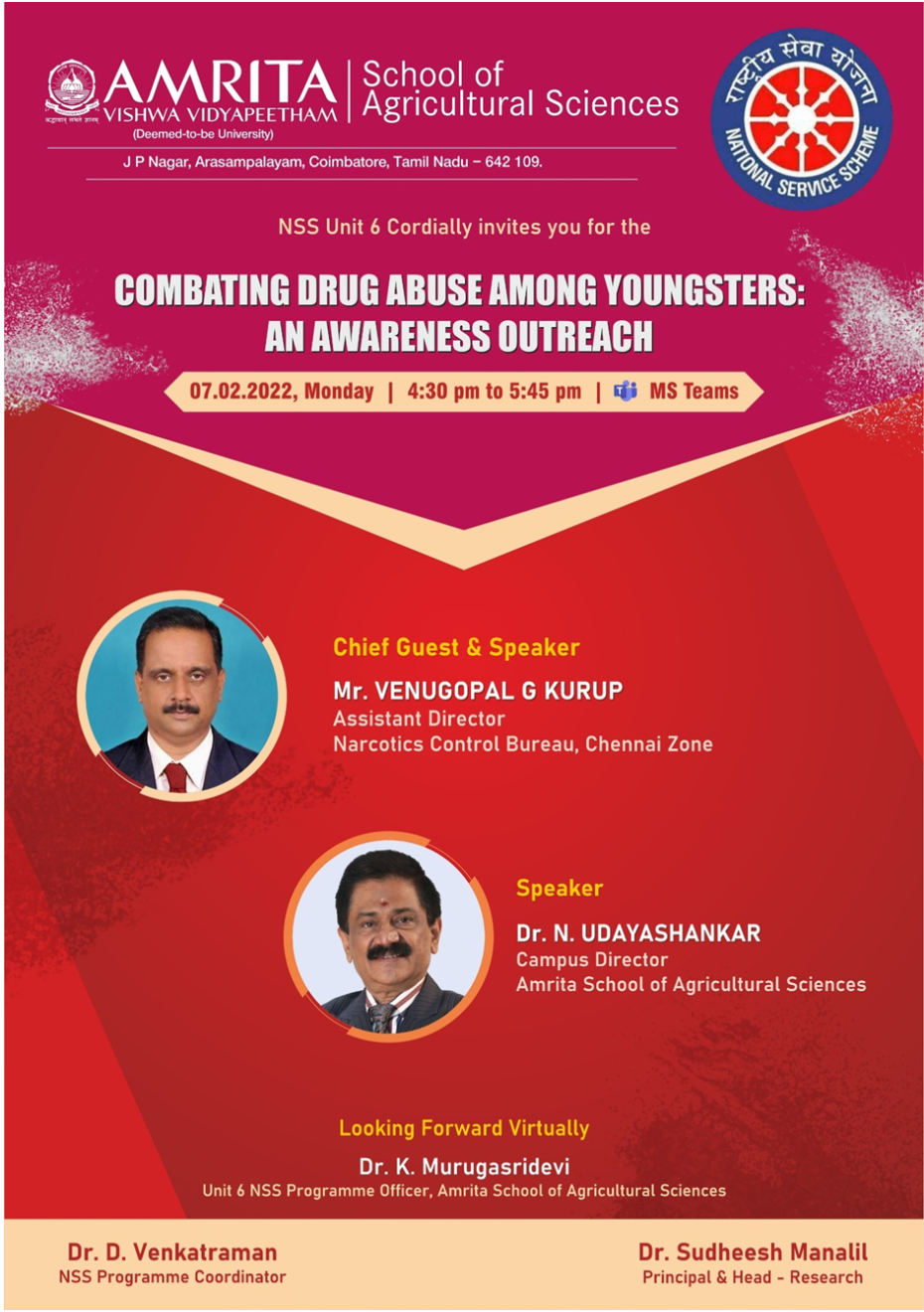