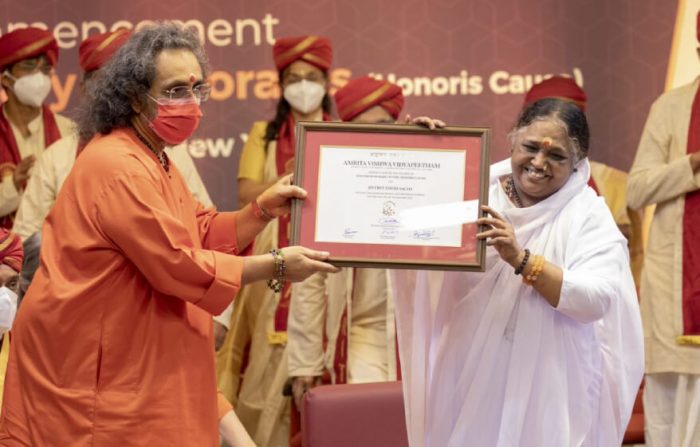 Amrita Vishwa Vidyapeetham (Amrita University), recognized as the fifth best University in India in the 2021 NIRF rankings, has conferred its first Honorary Doctorates on Dr. Jeffrey Sachs, Global Economist for Sustainable Development, and Mr. Kailash Satyarthi, Nobel Peace Laureate, during a virtual ceremony that was graced by the presence of the well-known humanitarian and spiritual leader, Sri Mata Amritanandamayi (Amma), the Chancellor of Amrita Vishwa Vidyapeetham. Shri Ashwini Kumar Choubey, Minister of State for Consumer Affairs, Food and Public Distribution and Environment, Forest and Climate Change, graced the ceremony via video conference.

A prominent voice in the dialogue on climate change and a pioneer in Sustainable Development, Dr. Jeffrey Sachs has made unprecedented contributions towards the preservation of the planet for future generations. He has been at the forefront of this important field for decades, and his impactful advocacy of sustainability at the United Nations and other international organizations, as well as with heads of state, has garnered the goodwill of leaders, experts and citizens across the world. Dr. Sachs currently serves as the Director of the Center for Sustainable Development at Columbia University. He has held the position of Director of the Earth Institute at Columbia University from 2002 to 2016. He is also the President of the UN Sustainable Development Solutions Network.

A human and child–rights activist, Nobel Peace Laureate Kailash Satyarthi is world-renowned for his tireless campaign of more than 40 years to end child slavery and exploitation, and to ensure the right of all children to education. The grassroots movement he founded has liberated more than 100,000 children and developed a successful model for their education and rehabilitation. His advocacy has resulted in international legislation for safeguarding children’s rights, with the United Nations making children’s concerns at the forefront of sustainable and inclusive policy–making.

Speaking at the ceremony, Dr. Jeffrey Sachs said: “I am so grateful for this honorary doctorate. It is a great honor to be part of your remarkable vision Amma. Amrita University espouses exactly what the world needs today. For me, Sustainable Development means two related ideas, which are both extremely important. One idea is the intellectual and scientific idea, wherein we need to understand physical systems such as climate change, biodiversity, agronomy, public health, etc. The other fundamental part, which is often missed and which Amrita University embodies, is the ethical dimension of Sustainable Development. We will not find a solution to our problems without compassion, love, mutual respect and recognition of common humanity. A combination of intellectual and ethical ideas is a must to achieve sustainable development.”

While accepting the honorary doctorate, Kailash Satyarthi, said, “I feel humbled and honored in receiving this honorary doctorate. This is not an ordinary recognition because as we all know Amrita University is not an ordinary university. This is a place to inculcate universal human values along with modern education in making young people change makers for a better world. Nothing could be more joyful than receiving this along with my dear friend Dr. Sachs. Today, as we know, the world is facing so many problems. Education is the key to achieving social justice, equality, sustainability, peace and empowerment. I was listening to Amma’s speech, and she gave solutions to all ongoing problems and the problems of the future, in such a short time. We cannot find a solution for social justice, until we approach problems with compassion. If something has to be globalized, it is compassion.”

In recognition of Satyarthi’s work in highlighting child poverty, Amrita University announced that it has constituted a scholarship in Satyarthi’s name. The scholarship will be available to any student who wishes to complete their higher education at Amrita.

Dr. P. Venkat Rangan, Vice Chancellor, Amrita Vishwa Vidyapeetham, said: “We are delighted to honor two accomplished and versatile personalities – Dr. Sachs and Mr. Satyarthi – with our first honorary doctorates. This recognition is not only for their immense accomplishments but also for the impact they have had on society, which is in alignment with the new ideal of compassion-driven research set by our Chancellor, Amma.”

Addressing the audience, Sri Mata Amritanandamayi (Amma), congratulated both the recipients of the honorary doctorates. “In today’s world, where conflict and greed rule, Sri. Jefferey Sachs and Sri. Kailash Satyarthi have overcome many challenges and are both actively involved in working to help society progress. The human race is confronted with so many burning issues. There is no guarantee that this beautiful earth will sustain us for another 50 years. If it has to sustain, human beings will have to make great changes to their thoughts. If we do not see or hear Nature’s warning signs, Nature will strike back. We have to give due importance to protection of Nature, because we are not separate from it. We need to change our thinking and imbibe love and compassion to bring about a real change.”

Shri Ashwini Kumar Choubey, Minister of State for Consumer Affairs, Food and Public Distribution and Environment, Forest and Climate Change, congratulated the recipients of the doctorate. He assured everyone that the government is committed to tackling the problem of child poverty and is committed to the climate-change agenda and Sustainable Development goals. 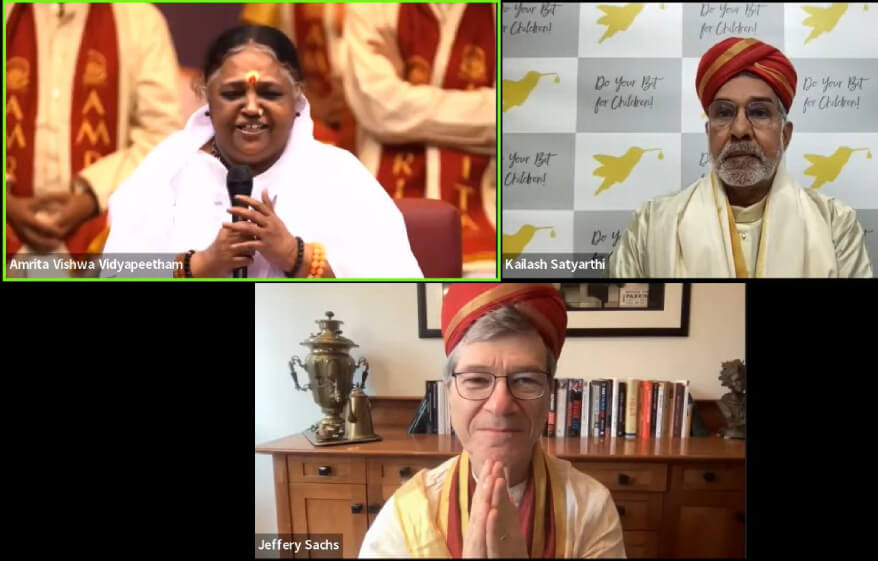 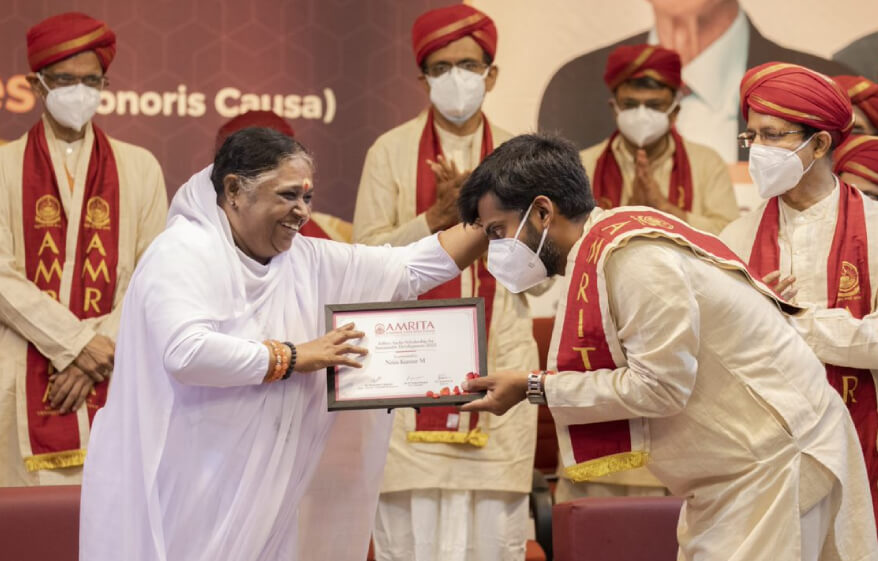 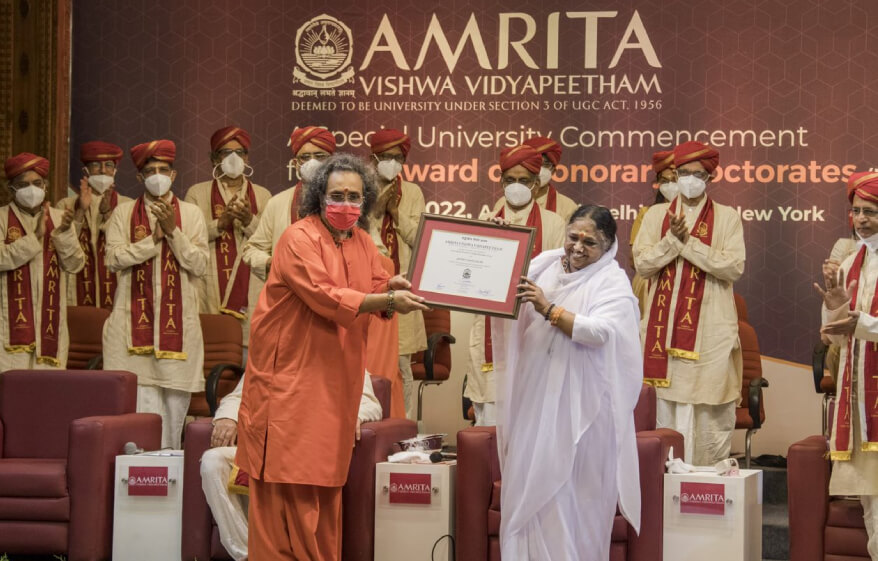 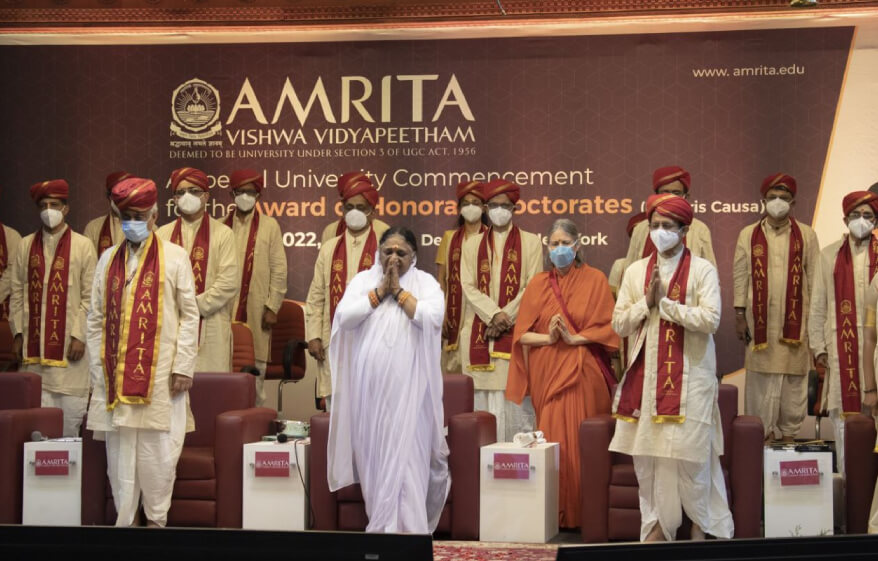 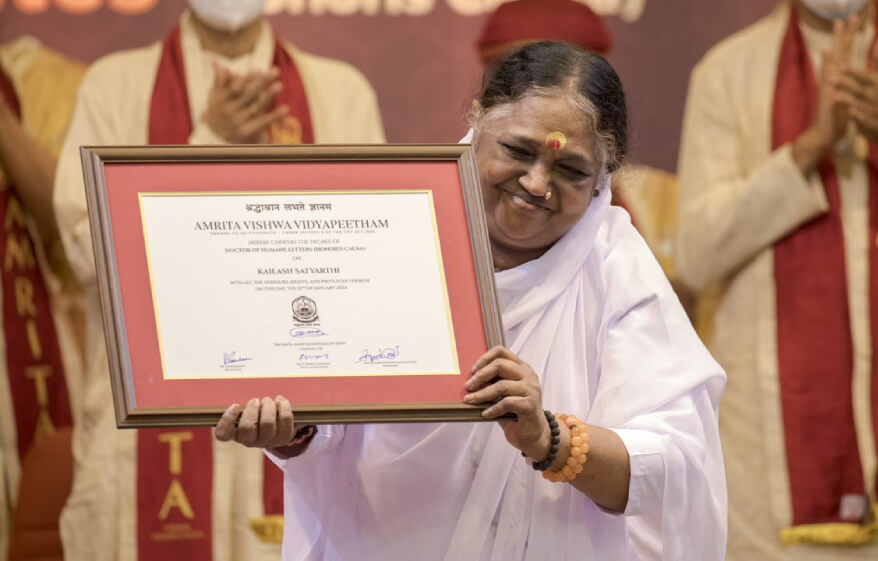 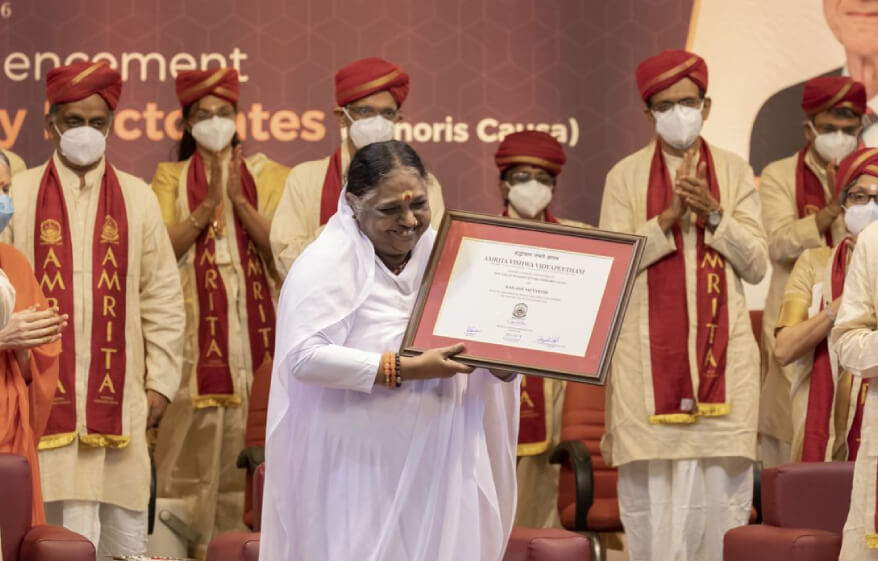 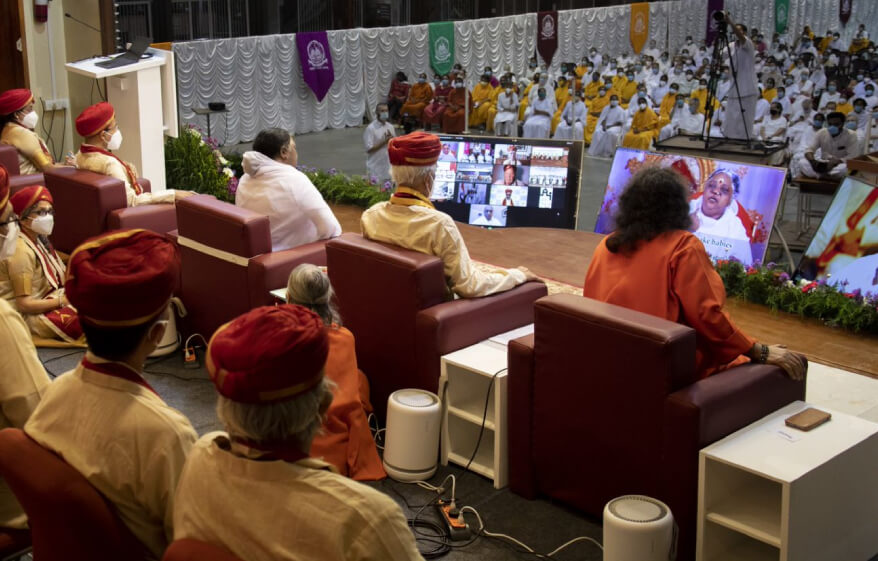