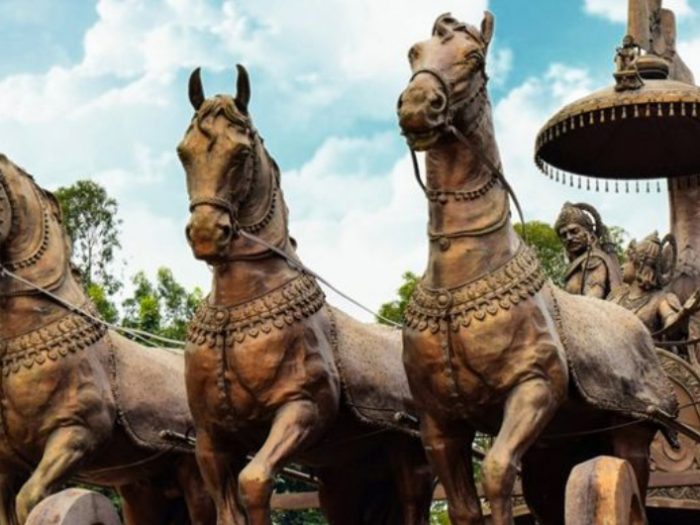 Mahabharata is a treasure chest of philosophical and spiritual treats. It can create a complete paradigm shift in your perception of the world. The treats are endless. You can explore your whole life, and still there will be more. But today, most people perceive Mahabharata from non textual sources. This leaves them prone to misconceived versions. When you don’t know what to read and how to read, or when you don’t read at all, you are more than often stuck with misconceptions or the shallow end of another man’s opinion. Mahabharata is such a case. Here a moss of ill conceived notions have collected over several decades. Let us consider an example of a very childish fallacy, that Draupadi is also known as Panchali because she has five husbands. This misunderstanding may be due to the ‘Panch’ of Panchali meaning ‘five’ in Hindi. But if you read Mahabharata, you would realise different. Draupadi is known as Panchali, because she is the princess of the kingdom of Panchala. Here, in fact, it is the nature of Sanskrit language that comes into play. She is Draupadi, because she is the daughter of Drupada. She is Yajnaseni, because Drupada is Yajnasena, and because she was born from a yajna fire. Gandhari is the princess of the kingdom of Gandhara. Bhagavan Sri Krishna being the son of Vasudeva, is Vaasudeva. The Pandavas are so called because they are the sons of Pandu. A nominal reading of Mahabharata can give you this knowledge. But which Mahabharata will you read? Is it enough to watch a Mahabharata television series? How many people know that besides all these names, Panchali’s given name is Krishnā.

After the swayamvara, a victorious Arjuna walks back home to Kunti, the most beautiful Draupadi and Bhima by his side. Arjuna and Bhima present Her to Kunti, who was facing away from them. He said, “See what alms we have got.”. Kunti inadvertently replies, “Share it together.”. This is the most popular account out there of why Draupadi married all the five Pandavas. Even a person who has not read Mahabharata will claim this. But inside Mahabharata there is more.

When Kunti said, “Share it together”, and turned around to see Draupadi, she regretted her words. She sought Yudhishtira for a solution devoid of adharma. Yudhistira ponders, reminiscing Maharshi Veda Vyasa’s words. A while back, before the pandavas went to the kingdom of Panchala, they encountered Maharshi Vyasa. He narrated the account of Draupadi in her previous life. She was this beautiful daughter of a great Rishi, and lived in an ashram. Though beautiful and pure of heart, she was unable to find a husband because of her previous karma. Filled with sorrow she performed austerities to gain a husband. In time she succeeded in pleasing Bhagavan Parameswara. When Bhagavan offered her a boon, she sought for a great husband with all qualities. But overflowed with desire, she repeated it five times. Bhagavan Shiva hence blessed her that she will gain five great husbands, in one of later lives. Later, this woman was reborn as Drupada’s daughter Draupadi.

This was divine knowledge, inaccessible to ordinary men. Contemplating Maharshi’s words, Yudhishthira made his decision. That Draupadi be wife to all the Pandavas. Later, as they reveal this decision to King Drupada, another discussion props up. Here Maharshi Vyasa appears yet again and narrates to King Drupada a second story. He relates how the five pandavas are five Indras, and Draupadi was Sridevi. We then learn that Bhagavan Parameswara himself instructs these five Indras to take birth on Earth. It was His divine will that Sridevi also be born on Earth, as wife to them all. We see that Lord Narayana also acknowledges this will.

This polyandrous relationship has been a constant topic of criticism. The most common version is that it was the result of a slip up made by Kunti. This was the circumstance that initiated the thought in the Pandavas and Kunti. But Mahabharata points out that this was the divine will of Lord Parameswara and Lord Narayana. Also Lord Narayana decides that He too will take birth on Earth. He chooses to live alongside these five Indras and Sri Devi as Sri Krishna and Balarama.

This gap between the Mahabharata text and the misconceived notions is enormous, leaving one in an utterly confused air than ever. Such misunderstandings often generate a detrimental effect on our views and perspectives, without bearing any philosophical or spiritual fruit. At the same time they also prevent us from exploring Mahabharata. In fact when we read Mahabharata directly, our perception of the world around us should improve profusely. Mahabharata is one the greatest reading experiences we can ever have. It has profound philosophical expositions in it. It has metaphors and tropes, political and strategic insights, history and culture in it. It has art and charm in it. All the more, Mahabharata has the practical wisdom to steer our lives in the right direction.

If you decide to venture into this ancient scripture of our land, you need to know where to begin, what to read, and how to read. The Mahabharata critical edition is a good place to start. With almost fifty years of work, comparing 1256 manuscripts, the critical edition is described as the oldest form of Mahabharata derivable. The research was conducted by Bhandarkar Oriental Research Institute, led by V S Sukthankar from 1919 to 1946. The critical edition introduces a level playing field to discuss and study Mahabharata. All that being said, Mahabharata is a big and ancient tradition. Any sanskrit Mahabharata or its translation in any regional language is part of that tradition. Take the most comfortable version, and start your Mahabharata journey today.

Harikrishnan Venugopal is a Researcher at Amrita Vishwa Vidyapeetham, Amritapuri Campus, with a deep interest in the intellectual and philosophical foundations of Indian Civilisation. He is also interested in Comparative Religion and the Cultural History of the World. He has been studying history and culture for the past four years. He was an Electronics Engineer by profession, with an experience of nine years.