Pachauri, who is also the Director General of The Energy and Research Institute (TERI) was in our Coimbatore campus to speak to students on the occasion of the 16th Institution Day Celebrations of the Amrita School of Engineering.

“Unless we live in harmony with nature, unless we are able to reduce our dependency on fossil fuels and adopt renewable energy sources and unless we drastically change our life styles, the world will increasingly become unfit for human habitation,” he warned. “Our ancestors, particularly in India, placed emphasis on ethics and social morality; they perhaps had less comforts but certainly had more fresh air and water.”

“Human actions are interfering with the delicate balance of nature,” he added. “Floods, heat waves, water scarcity, tsunamis will become frequent in the future. The impact on agriculture and healthcare will be enormous. The world will be forced to take care of more and more climate refugees in the very near future.”
Download Presentation » Lauding the efforts of the administration of Amrita Vishwa Vidyapeetham for the extensive green cover now part of the Coimbatore campus, he said that Amrita students were really fortunate to be living in a place where they could breath fresh air, away from the pollutants that dirty the atmosphere in most cities today.

Dr. Rajendra Pachauri endorsed the Amala Bharatham Campaign initiated by Chancellor Amma. “Amala Bharatham represents a noble mission taken up and championed by the Mata Amritanandamayi Math … it deserves all support and encouragement … I wholeheartedly endorse this great mission and wish it great success.”

In addition to highlighting the various achievements and activities of the staff and students over the course of the previous year, he also focused on the green initiatives of the campus.

“I would like to place on record that we have three plants for waste water treatment and re-use,” he said. “The entire waste water after treatment is used for irrigation. We also separate plastics, metals and paper waste at the source itself and prepare it for recycling. Food waste is composted.”
Read Complete Report » Prize distribution followed. Over 400 students were honored with prizes for academic and cultural proficiency. SAE club achievers, college magazine editors, cultural and joint secretaries of various clubs were among those honored. Chinmayi team won the overall championship with 161 points, while Anandamayi team emerged as runners-up with 134 points.

The Institution Day was actually the culmination of Amritotsavam – the annual intra-mural competitions in literary and cultural activities. Prize-winning individual and team items in song and dance were showcased; this brought the evening to a close. 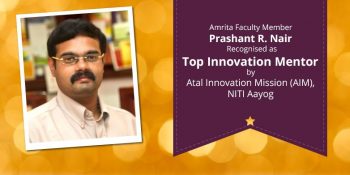 A Duty That Calls 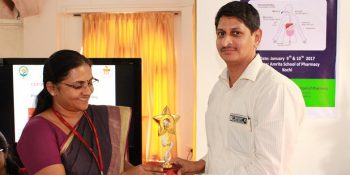 ​A hands-on workshop on Pharmacokinetic Data Analysis, using Phoenix WinNonlin, was conducted at ...