Invited speakers and guests at Amrita Bioquest had the opportunity to meet with Chancellor Amma during the conference. They posed many questions and received thoughtful replies. An edited excerpt from the question-answer session follows.

Question to Amma: How can we combine ayurveda with modern biotechnology?

Amma: Amma is very happy to hear this, it will be great to bring the two together, ayurveda and modern biotechnology. Of course, practically speaking, it may not be so easy. So a lot of effort would be needed in this direction. Once we put in the effort, once they have come together, progress after that may be quite spontaneous.

Question to Amma: I am very impressed by Amma’s profound understanding of everything in the world. What is Amma’s view on recombitant DNA? Some people hate genetically modified organisms and others think they can bring huge benefits to mankind. What is the ethical view of all of this?

Amma: There is no doubt that our ancient system was the best. However Amma is not discarding the modern system. For Amma, everything is significant. Amma can’t say that only the old is needed and we should discard the new.

To give an example, in the olden days, in the initial stages of a fever, if one inhaled steam from water which was boiled with tulasi leaves, the fever would subside. The person also fasted and this provided a rest to the internal systems. Now at the slight hint of a fever, we take antibiotics, and the beneficial microorganisms are also killed along with the germs.

But when fever rises to say 102 degrees, then there may not be any other option, one might need to take antibiotics. But the intensity of our allopathic medicines is increasing and the chemicals are having a harmful impact on our bodies. There are often undesirable side effects. For example, one might be taking medicine for cholesterol which may also affect the liver or the kidney.

To give another example, we now have new types of seeds. These are comparatively weaker and require chemical fertilizers. They will not experience healthy growth if organic manure is used. When we go to tribal areas or into the countryside, we should try and collect natural seeds so that they do not go extinct. It is not enough to merely appease hunger; a healthy, nutritious diet is also needed. Only divine grace can really help humanity.

Question to Amma: Is it beneficial for all three major systems of medicine – ayurveda, allopathic and homeopathic to come together?

Amma: If these three major systems come together, we can certainly develop a new system which will do less harm. We need to create a sense of unity among the various systems of medicine and their practitioners. Each one has its own ways for diagnosing and treating. In ancient times, minds were subtle; the ayurvedic practitioners were also practicing meditation and leading austere lives. Their minds were receptive and capable of imbibing all the disciplines of study. Actually Ayurveda is a part of the Vedas. We should all work together to create a balance.

Comment to Amma: Being here is a special experience for me. It is amazing to see the science projects going on here at Amrita Vishwa Vidyapeetham. Everybody is very dedicated and focused. There seems to be the perfect blend of science and spirituality. Here people are praying and doing research.

Amma: Research is one part of the activities of the ashram. Amma has good children who form a good team. They go hand-in-hand with a feeling of oneness. It is their goodness that is reflected in all the actions. For Amma, even the so-called bad people have good qualities in them; Amma accepts everyone. When someone comes to her, she tries to see how the person can be transformed so that they may serve.

Amma became interested in research after observing the people here in this coastal village. Here fishermen did not have bank balances … if they had a good catch, they ate, otherwise they starved. In a hundred families, one person might have had a government job. Many had heart diseases but were either unaware of this or did not have the money for treatment. People who could have otherwise lived upto 80 died at 40, because they could not afford to buy a stent. Seeing this, Amma felt that if a cost-effective stent could be produced as a result of research and development, many people could be helped. That is how the research activities began here. 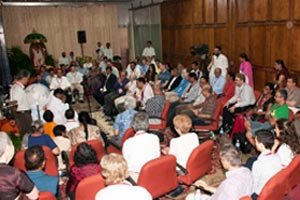 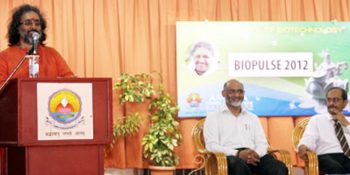 The Amrita School of Biotechnology celebrated its 8th Annual Day, Biopulse 2012, on September 5. ... 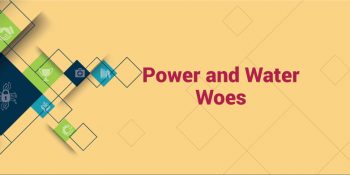 A paper from Amrita Vishwa Vidyapeetham’s School of Engineering at Amritapuri campus was recently ...

Why does one keep going back to check if a vacation photo one posted on Facebook garnered enough ...