In the southern districts of Punjab, a staggering 30 to 35 new cancer cases are diagnosed daily, reflecting the increased prevalence of cancer in the region.

Farmers in India’s grain bowl use excessive and unregulated pesticides to manage crops prone to pests. Many of these pesticides are known to be human carcinogens.

It’s a grim situation which calls for effective cancer treatment. The book was published by Lambert Academic Publishing and is available in book stores around the world and also online for 79€ (114$).

PNAs or peptide nucleic acids are artificial polymers that mimic DNA and RNA found in the cells of all living organisms.

These powerful biomolecular tools possess strong binding capacities and biological stability. PNA like DNA has the ability to store information. However, unlike DNA it’s unusually stable within a cell because enzymes that normally break down proteins and nucleic acids don’t affect it at all. “PNA has a neutral back bone and hence DNA-PNA duplex is much more stable than DNA-DNA duplex.”

“PNAs also have high binding affinity and specificity recognition. It is due to their stability and unique structure that they are now being used in anti-cancer and gene therapeutic drugs.”

These synthetic molecules have other promising applications in biotechnology and medicine. They can be used as chromosomal analysis probes, diagnostic or molecular-biological tools and for the treatment of diseases caused by bacterial and viral pathogens.

They do have some drawbacks that include water solubility, cell permeability and the need for a PNA-DNA binding recognition tool or electrochemical/fluorescent marker.

But for now, Dr. Prasanna’s research on PNA’s various therapeutic potentials seems very promising and is planting seeds of hope for the ailing.

Even as indiscriminate action by man in using deadly pesticides continues to threaten both the long-term well being of the environment and man himself.

AmritaWNA Presents at 5th International Conference on IT Convergence ... 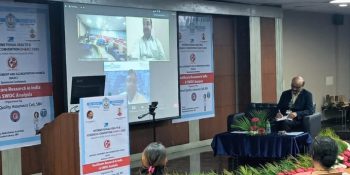