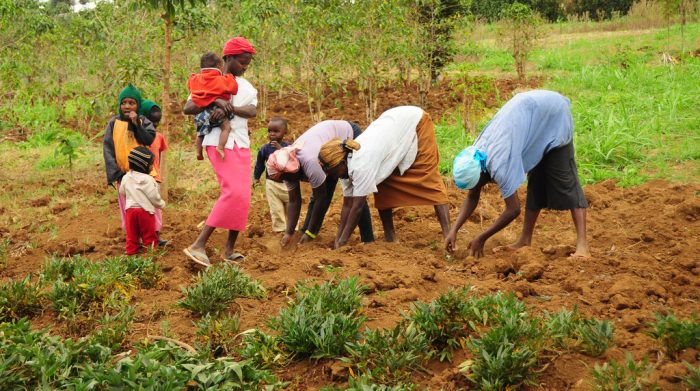 The duo visited 22 villages spread across four drought stricken districts in Uttar Pradesh and Madhya Pradesh. They interacted with the villagers as well as with officials responsible for implementing NREGA, the National Rural Employment Guarantee Act in these places.

NREGA was enacted in 2005. The Act guarantees employment for one hundred days in a year for adult members of any rural household. One of the largest such initiatives in the world, the total outlay for the scheme is over 40,000 crore.

The Amrita students investigated whether the implementation of NREGA in the drought stricken districts helped with replenishment of common resources such as water bodies and whether it actually promoted environmental rejuvenation activities, as is sometimes claimed.

“NREGA projects such as construction of canals, field channels and dug wells are complementary to projects taken up by the Ministry of Water Resources, which provides technical assistance. Many irrigation projects we saw during our field visits were either not constructed properly or were not being utilized optimally,” the students explained.

“Convergence between NREGA and National Afforestation Program is desired. The forest fringe areas and common pool forests can be developed using a watershed approach in a holistic manner. Afforestation has been taken up on a large scale in Bundelkhand. Many barren areas bear the fruits of hard work put in by NREGA workers,” they noted.

The students were guided by Dr. Amalendu Jyotishi and they completed the study in collaboration with the Center of Economics and Social Sciences, Hyderabad.

When they submitted the results as a paper titled Role of NREGA in Replenishing CPRs: A Study in Bundelkhand Region for a national-level competition, they were shortlisted for the final round from among 800 teams.

The national-level competition titled Earthian Award was organized by Wipro to encourage Indian youth to come up with solutions for long-term sustainability.

Although the team didn’t finally win, they received accolades for their work.

Also receiving accolades was another team from their campus that made it to the final round of the same competition.

The students studied factors leading to unsustainability in agriculture and consequently food insecurity in India. The green revolution in the 1960’s led to an initial increase in agricultural yields that was ultimately unsustainable. Over-exploitation of resources, degradation of those resources and environmental pollution were the longer term results, which were not anticipated.

The students studied government policies, credit availability to farmers and investment by the public and private sectors. They found that foodgrains worth billions are wasted through poor storage facilities and an inefficient distribution system.