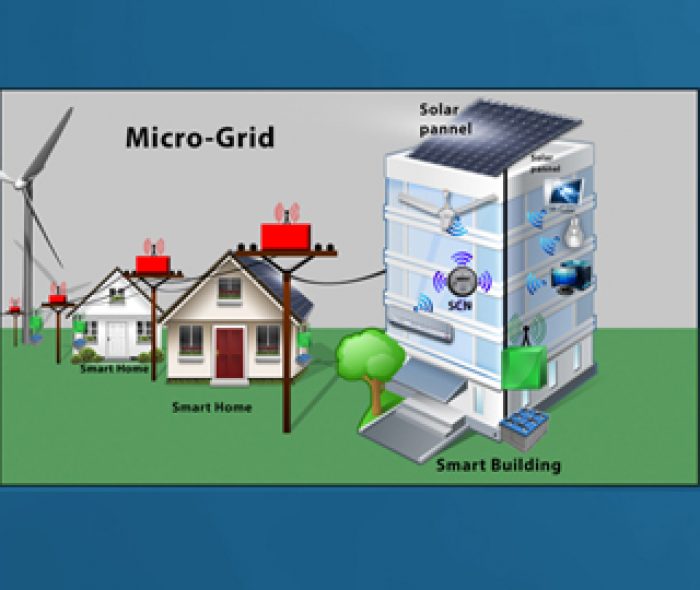 Microgrid is a  local energy system consisting of distributed energy sources storage and loads capable of operating in parallel with or independently from the main electricity grid.

Approximately one third of India’s 600,000 villages do not have access to electricity and villages that do, receive power intermittently and with constant disruption, making the supply of electricity unreliable. Furthermore, a lack of locally qualified electricians and maintenance follow-ups leaves much to be desired in the endeavor to bring electricity to rural India.

The idea for Amritasphuranam, a project to light up rural India, happened four years ago with a casual comment from Amma to Dr. Maneesha Ramesh, director of Amrita WNA.  Dr. Maneesha visited a smart grid lab in a well established university in the U.S. and spoke to Amma about the project.  Amma later stated it would be good if the Center developed a research project in this area that would benefit rural communities.  A few months after Amma’s statement, a final year Amrita WNA Master’s student took on the task of developing a Microgrid prototype that was later worked on by a group of researchers who aimed to solve the problems of power theft, fault detection and manual billing among others. After a few years of research and testing, a sustainable model for a solar Microgrid was developed.

With the funding from the Institution’s parent NGO, the M.A. Math, Amrita Sphuranam, a project to light up rural India utilizing self-sustainable Microgrids and renewable energy, was created. The project was officially inaugurated by the Chief Minister of Kerala, Shri Oomen Chaandy, on September 27th 2014. The particular site is at Vallaram Kunnu, Mothakara, Wayanad, which is a tribal region with several tribal houses scattered over the hills. As per the geographical conditions solar power generation unit was adopted as the best choice for rural electrification for this region.

The existing solar system in the region has a Solar PV system of total capacity of 6kWp. In order to benefit the maximum number of villagers the system is distributed across six clusters with each cluster having a total capacity of 1kWp and have six to ten houses connected to it. Under this scheme each houses connected to the generation unit is provided with three CFL lamps for lighting and power socket to use minor loads (eg. Mobile charging).

After assessing the requirements of the village, faculty, staff, and students at the Department of Electrical Engineering, the Amrita Center for Wireless Networks and Applications, the Department of Civil Engineering, the Amrita Center for Nanoscience’s– Nano Solar Division, the Amrita Institute of Medical Sciences(link is external) (for technical guidance), and the Amrita Center for International Programs implemented a plan to provide electricity to the village from available hydro resources. Faculty, staff, and students designed, developed, and installed a distribution and transmission network which included a check dam, a network of pipes, a 5KW micro hydro generator, an underground transmission line, and a power house.