Amrita Darshanam – International Centre for Spiritual Studies (ICSS) conducted a three-day National Seminar on Development of Pramāṇa Theories and the Systems of Logic in Buddhist Tradition. The seminar was held at Bengaluru campus of Amrita Vishwa Vidyapeetham February 28-March 1, 2020, in collaboration with the Indian Council of Philosophical Research (ICPR), Delhi. Leading academics in the field of Buddhist philosophy and the traditional Tibetan monastics from different parts of India participated and presented their scholarly papers in this seminar.

Mr. Arjun Bharadwaj (Assistant Professor, Amrita Darshanam, Bengaluru Campus) delivered the welcome address. After welcoming all the dignitaries and participants of the seminar, he spoke about Amrita Vishwa Vidyapeetham, provided a brief introduction of ICPR and acknowledged its support in organizing the event.

The introductory address was delivered by the convener of the seminar, Dr. Pranshu Samdarshi (Assistant Professor, Amrita Darshanam, Bengaluru Campus). He outlined the objectives of the seminar and encouraged the scholars and delegates to participation in question-answer sessions and group discussions.

The inaugural function was followed by the keynote address from the Abbot of Sera Mey Monastery, Serme Khen Rinpoche Geshe Tashi Tsering. He underscored the importance of the system of logic in the Tibetan monastic education. He spoke about the need to further explore the ancient Indian relations with Tibet to fully understand the shared scholastic heritage of these two countries. In the end, he addressed the audience highlighting the importance of such seminars.

The first session of the first day was the presentation of Prof. C. D. Sebastian from IIT, Mumbai. His paper was titled “The Significance of Nāgārjuna’s Vigrahavavyāvartanī ”. The afternoon session featured the paper by Dr. Kuntala Bhattacharya from Rabindra Bharati University. She spoke on “The Epistemic Turn in Yogācāra: Diṅnāga and Dharmakīrti”. The evening group discussion session was moderated by Dr. M. Rama Krishnan. Many speakers and delegates actively participated in the discussion.

On day two of the seminar, the first session had the paper of Prof. Mangala R. Chinchore from Pune titled “Upāya-kauṡalya-hṛidaya-ṡāstra: An Inquiry”. In her paper, Prof. Mangala R. Chinchore critically investigated philosophical uniqueness of the text named “Upāya-kauṡalya-hṛadaya-ṡāstra” in its proper philosophical context by interpreting and analyzing this text from a methodological point of view.

In the next session of the seminar  the paper titled “The Dissemination of the Buddhist Pramāṇa Tradition in Tibet” was presented by Prof. Tashi Tsering who came from Central University of Higher Tibetan Studies, Sarnath. He highlighted the difference between the two pramāṇa traditions of Tibet that flourished before and after Sakya Pandita. In the next session had the paper by Prof. Dilipkumar Mohanta from Kolkata was presented, titled “Nāgārjuna on Negation (niṣedha): A Note”. In his presentation, he discussed the different possibilities of the negation through a diagram. The group discussions in the evening was moderated by Prof. Sachchidananda Mishra.

In the first session, Prof. Arvind Kumar Rai presented his paper titled “Examination of Some Important Topics: Perception, Immediacy and Human Behaviour”. He compared the philosophy of J. Krishnamurty and his method of reasoning with the teaching of Buddha and pramāṇa-sāstra. The afternoon session had the paper titled “Determinate Perception: A Type of Pratyakṣābhāsa”, presented by Prof. Sachchidananda Mishra who came from Banaras Hindu University.  He pointed out the inner contradictions within the Buddhist theories about Anumāna as a source of valid cognition.

In the last session, the paper of Mr. Anish Mishra, a research student from Hindu College, Delhi University, was presented. His paper was titled “How would Dharmakīrti describe a Dhrupad Recital”. Mr. Anish Mishra tried to relate the principles of aesthetics with the idea of Svalakṣaṇa and Sāmānya-lakṣaṇa of Dharmakīrti. This session continued with the paper of Prof. Pradeep P. Gokhale titled “Transition of the Buddhist Theory of Inference: From Diṅnāga to Dharmakīrti”. Dr. Kuntala Bhattacharya read the paper on behalf of Prof. Pradeep P. Gokhale.

On the third day evening, the seminar concluded with a valedictory session that included the distribution of certificates to speakers and participants. Some participants shared their experiences on how they had been benefited by this seminar. This session was presided over by Br. Prasanth (Assistant Professor, Amrita Darshanam, Amritapuri Campus) and Prof. Tashi Tsering. The seminar report was delivered by Dr. Pranshu Samdarshi, which was followed by the vote of thanks given by Mr. Manish Rajan Walvekar (Assistant Professor, Amrita Darshanam, Bengaluru Campus). The valedictory session of the seminar concluded with the recitation of a few verses of Bhadrācāri-praṇidhāna stora by Prof. Tashi Tsering. 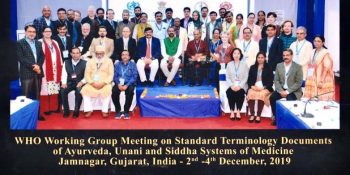 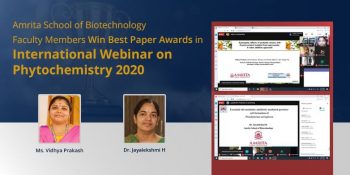 An International Webinar on Phytochemistry 2020 organized by Kerala Academy of Sciences from ... 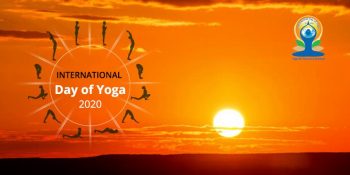 In view of the COVID-19 pandemic, the Department of Swasthavritta, School of Ayurveda, Amrita ...