The second-year management students of Amrita School of Business, Amritapuri campus, had the opportunity to interact with Shri Basant Kumar Gupta, an eminent personality and former Ambassador of India to Italy and Tunisia on the topic, “Universal Message of Indian Spiritual Traditions”, on July 25, 2018. He has been in the Indian Foreign Services for almost 36 years and also had a stint as the Consulate General at the Indian Embassy in many countries including France and Hong Kong since 1979. He is also a person who has a mastery over Indian scriptural texts such as Bhagawad Gita and Shrimad Ramayana and has authored, The Gita, an Eternal Wonder, Timeless Wisdom from Ancient India and Teaching of the Ramayana.

The interesting session conveyed deep thoughts on various aspects of Indian spirituality applicable to modern day life. Shri Gupta commenced with an inspiring explanation on the meaning of the term “Bhaarath” and subsequently the meaning of the word “University” – The spiritual meaning of “University” being the “Temple of Knowledge and Timeless Wisdom”. With relevant and apt references to Bhagawad Gita, Mr. Gupta moved on to highlight who is a wise person.

He said according to Gita, Chapter 5 Verse 18,

That is “a wise person has no distinction between a Brahmin (learned scholar), a cow, an elephant and a dog-eater”. A wise person is the one who looks at all the above mentioned categories of living beings as equal.

He also highlighted on the concept of God by sharing an interesting experience of his interaction with students in Italy. He mentioned that God is nothing but the “goodness” in each person. If one is able to see the goodness in his fellow being then he is able to see God.

Mr. Gupta also shared his experience during his visit to Ayodhya– The holy abode of Lord Rama. He was narrating how he felt surprised to see an Islamic scholar citing a quote from Gita.

He also extended his discussion on the concept “ Soul or Atman”. According to Gita, Chapter 2 Verse 23,

Moving on further, Mr. Gupta provided deep insights into the four kinds of problems as described in the Gita. He “acronymed” it as “CAGE” – Cravings, Anger, Greed, and Ego. Given these four problems that every human being faces in this world, he stated that happiness will last short term, whereas sorrow lasts for a longer term. He also took a moment to explain what is “Permanent” and what is “Transient” in life. This was one point of awakening where students realized that all worldly pleasures are transient in nature and only Bhagawan is permanent. By building more to the above point, Mr. Gupta touched upon the idea of“Sthitapragna” according to the Bhagwad Gita (Chapter 2, verse 54-59) and concluded his hour-long inspiring speech.

Subsequently, the forum was open for questions. Various students put forth interesting questions pertaining to the applicability of Bhagawan Krishna’s words to modern day life and how do we handle day-to-day problems according to Bhagawan Krishna’s advice. Mr. Gupta emphatically answered them by occasionally quoting his own experiences of being in Foreign Services and also from many facets of his personal life. On the whole, the session was really inspiring, informative and relevant to modern day managers as it helped them to establish a link between spirituality, management and day-to-day life. 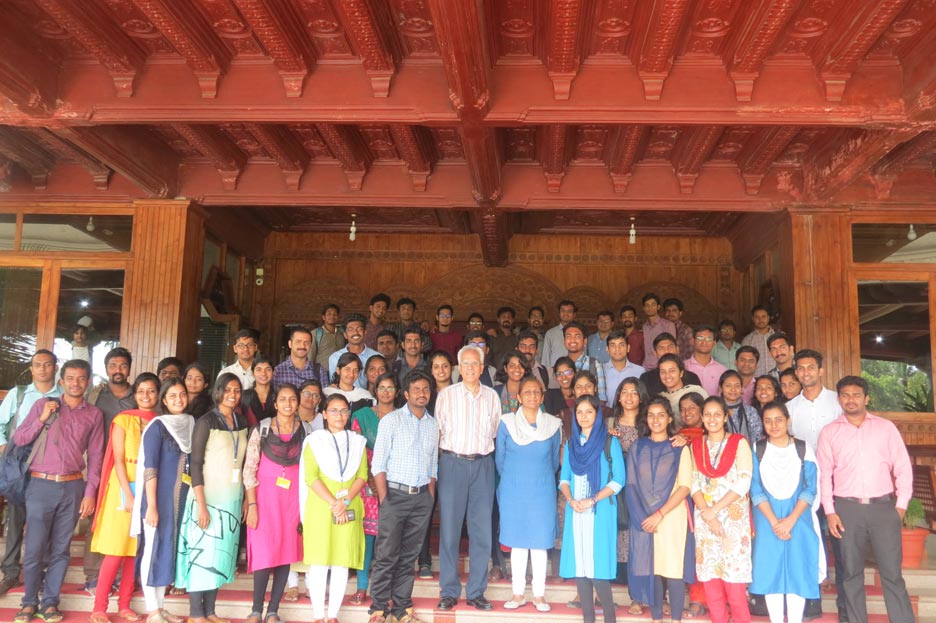