Last year an Amrita team from the Department of Mechanical Engineering, Amritapuri campus presented its work with an innovative robotic gripper at an international conference in Seoul, Korea. This year the team, now with additional members and more innovations under its belt, traveled again to Seoul to present its research at the 28th International Symposium on Automation and Robotics in Construction during June 28 – July 2.

“Leakages and cracks in oil and gas pipe lines are a major cause for environmental hazards,” explained the students, Sai Dinesh, Aditya K. and Roshin Raveendran. “This time, we at Amrita, tried to offer a solution to this problem.”

Their presentation of the prototype was greeted with an enthusiastic applause from the distinguished audience at the conference. “In the years past, countries such as Mexico, Belgium, Nigeria, Russia and United States have been impacted by disasters due to leakages and cracks in oil and gas pipes,” further explained the students. “Our proposed robotic device can be effectively used to fix such problems.”

Guided by their faculty members, Dr. Ganesh Udupa and Mr. Pramod Sreedharan, the students built a micro-walking robot with flexible micro actuators (FMA) and having a single internal chamber. An innovative electro-pneumatic control algorithm and a simple feedback mechanism were also incorporated.

Explained the overall vision of the project, Dr. Udupa added, “We tried to keep in mind that the final robot should be compact and easy to manufacture.

“In Robotics, micro-walking robots play a very important role. They can easily perform inspection and maintenance tasks inside pipelines or narrow spaces where people cannot easily enter. They can be used in nuclear power stations and chemical plants. Using robots in these places frees people from having to perform potentially dangerous tasks. Also robots can be programmed for greater precision.” “Extensive research work is under way all over the world for the effective design of such robots. An exhaustive survey would convey the idea of increasing sophistication and the use of innumerable components and elaborate control programs.”

“Micro walking robots proposed by earlier researchers use flexible micro actuators with two or more internal chambers whose internal pressures are controlled independently. Our device with a single chamber FMA weighs less and also has a less complicated control system. It requires no lubrication due to the absence of sliding parts. Such a robot can be easily miniaturized.”

“Our future work will focus on incorporating a micro-compressor within the body of the micro walking robot so as to be able to run it remotely without the need of a lengthy compressor air pipe,” he concluded. 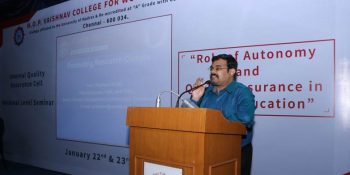 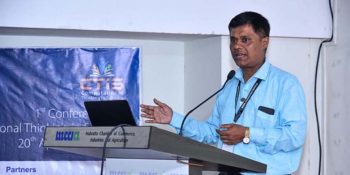