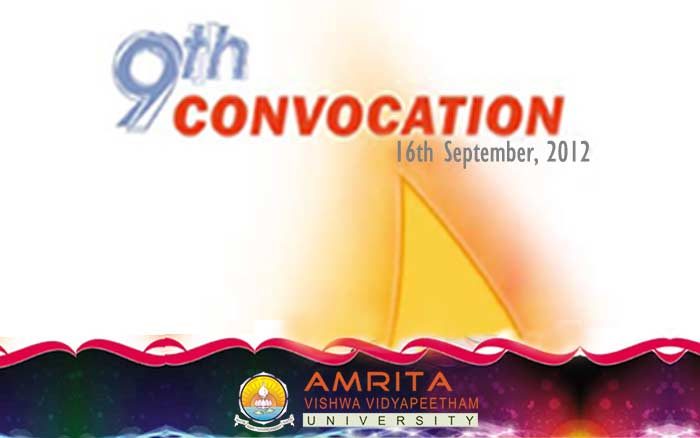 Over 2500 students from all 5 campuses of Amrita Vishwa Vidyapeetham received their degrees today, at the 5th Convocation of Amrita. Nearly 50% of the students were women. About 60% received bachelors degrees, and the rest were awarded masters and doctoral degrees. The institution also awarded several MS (Research) degrees. Brahmachari Abhayamrita Chaitanya, Pro-Chancellor, welcomed the gathering. Dr. M. Annadurai, Project Director of the Chandrayaan-1 project delivered the convocation address. “I feel honored to stand here as the chief guest of today’s function, in an institution founded and named after one of the greatest mothers of this mother earth,” he stated. Addressing the students on the sprawling campus greens, he extolled the high mission and the vision of Amrita Vishwa Vidyapeetham.

“Your mission to nurture both the spiritual and intellectual parts of men and women is what will make an individual a complete human being,” he stated. “This all round development is the need of the hour more than ever before. I earnestly believe that by graduating from this institution, you are starting the next stage of your life with all the potential to become a complete human being.” Dr. Annadurai exhorted the young minds to also harness the power of team work to strengthen our nation. He narrated how the Chandrayaan-1 project team included diverse people located in countries such as US, Sweden, UK, Germany, Bulgaria and Japan. “Harmonising efforts of all team members towards a common goal and realising that goal within an allotted budget and schedule demonstrated how well the team could convert a very difficult situation into a historic opportunity,” he said.

Swami Amritaswarupananda Puri, President, Amrita Vishwa Vidyapeetham and Vice Chairman, Mata Amritanandamayi Math delivered the benedictory address. Underlining the importance of spirituality in life and society, he said, “Lack of spirituality leads to fear and anxiety. We can choose to create a world of either suffering or happiness on our own. Minimize the weight of the ego and maximize the space in the heart and you will have a way to realize true love.” Twenty six students from the different campuses were awarded gold medals. Twelve students were given silver medals. “In a span of five years, Amrita has grown from 2000 to 13000 students, who are spread across its five campuses,” remarked Dr. Venkat Rangan, Vice Chancellor of Amrita Vishwa Vidyapeetham. “Today we have about 1500 faculty members, perhaps more than the number in many other institutions. Today we are internationally recognized as one of the world’s best universities,” he added.

Scenes of traditional gaiety and happiness marked the rest of the day as the students bid tearful farewells to their friends and teachers. As they embark on the next journey in their lives, we at Amrita, wish them much grace and success in all that they do. In a world driven by commerce, may they make such things that will help their fellow beings. We wish them all the best!