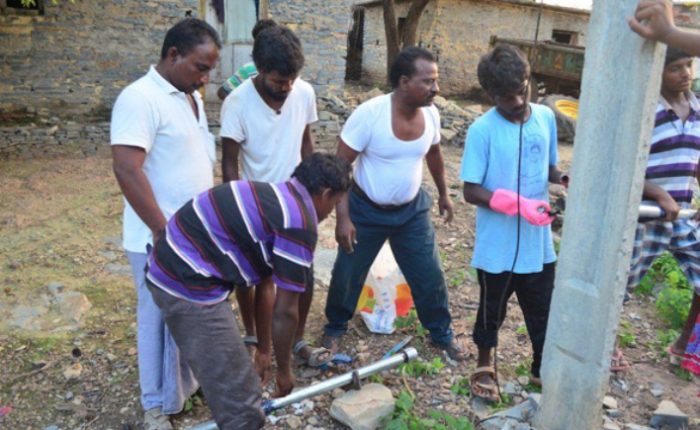 Although the village is blessed with a pond and four bore wells, the village women have to spend 3-4 hours a day, walking several kilometers in the heat, just to collect water. Furthermore, the village consistently faces water scarcity during the summer months. The situation is worse due to the restricted access to water during the summer, and the frequent power cuts in the village force women to wait long hours in the scorching sun for water pumps to start working once more. Finally, while pumping water directly from the bore wells, villagers waste about 75 percent of the water they intend to collect. Recognizing the hardship of the villagers, faculty, staff, and students from the Amrita Center for Wireless Networks and Applications and Amrita Self Reliant Villages (ASeRve) worked together to build a water distribution system for more effective water use and management.

The team conducted semi-structured interviews to understand social, cultural, economic, political, environmental, and technological factors and features in the village. They also went around the village and made a resource map which gave the team a clear picture of the sustainable resources available in the village and helped them understand the quantity of the resources available. After the team and villagers had several group discussions and meetings resulting in a modular design for a water distribution system, they decided to design it in a way so that water is distributed through a pipe system that connected all the borewells in the village to a main tank where the water could be collected and stored. The main tank was then connected to 7 smaller tanks with 35 taps placed in strategic locations to help the villagers gather water. The network of pipes, spread over 2km, ensured the availability of water to each household. Clocking in over 10,000 hours, the team, along with the villagers, installed a piping network, 35 taps, one 5,000 liter tank and and seven 2,000 liter tanks. Water is now easily accessible to all 200 homes.

Modeling of Deformation in Machining Processes

Study and Simulation of Landing Dynamics of a Lunar Soft Lander

Characterization of the fibronectin isoforms and its fragments