Brahmachari Abhayamrita Chaitanya, the Pro-Chancellor of the institution, greeted the gathering, saying in his welcome address, “This is the occasion for the young minds to take off in their lives, to bear the flag of Amrita contributing to the society’s uplift and development as per Amma’s vision.”

He also highlighted the various significant accomplishments of the institution in the last academic year.  He mentioned the US patent for Amrita Center for Wireless Security and Networking Applications, for its Wireless Landslide Detection System, the first system in the world to detect and warn of landslides.  Additionally, AMMACHI labs achieved a significant milestone in the UN supported project for the empowerment of women, World Bank Funding for Amrita CREATE in the E – Governance and Big Data Analytics Platform and Center for E – Learning’s A- View hailed as one of the most important internet innovations. Amrita School of Medicine also launched ten super multi specialty centers for treatment of different diseases and the Center of Nanosciences developed a nanotechnology infused solar cell, which is deployed in many villages in India.

Speaking on the occasion Sampujya Swami Poornamritananda Puri, General Secretary, Mata Amritanandamayi Math, emphasized the importance of selfless action and love and grace to be successful in life. “Divine grace will enable you to do the right thing at the right place at the right time and in the right manner to become a successful professional.”

Dr. Manas K. Mandal, Distinguished Scientist and Chief Controller R&D (Life Sciences), the Defence Research and Development Organization, Ministry of Defence (DRDO), Government of India, delivered the convocation address. “Make a mixture of our context in which we live, the content where we specialized and the intent to serve the nation. Think about the career but do not forget life. After getting degree, be deterministic and try to target based on the failures rather than based on success.”

The guest of honor Professor H. P. Khincha, Chairman, Standing Committee, National Mission on Education through Information & Communication Technology (NMEICT), Government of India also addressed the gathering. He outlined the value of living with stories. “What you need in your life is there with you, you have to open your eyes and see those to fulfill your life for yourself and for everybody else.”

Deans, Principals and Directors of Schools and Centers of Amrita Vishwa Vidyapeetham were the other dignitaries present. All the speakers congratulated and wished the graduands success.

1271 young men and 1175 young women were present on the day. Sixteen Ph. Ds, nine MDs, one MCH, and one DM were also awarded. 103 top students were felicitated with medals, rank certificates and special awards such as Jyotsana Ravisankar Award, Jayavel Memorial Award and Prakash Memorial Award.

“It was a fabulous journey of learning, happiness and spiritual upliftment here at Amrita,” noted Gayathri V., who was conferred with Gold Medal in M. Tech. Computer Vision and Image Processing. 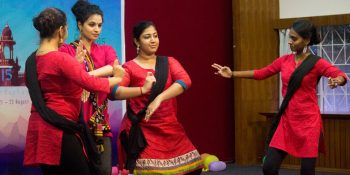 Utsav reveals the unending zeal and determination of the students of Amrita School of Business ... 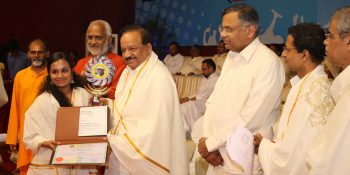 The 12th Convocation of Amrita Vishwa Vidyapeetham was held at Coimbatore campus on September 7, ... 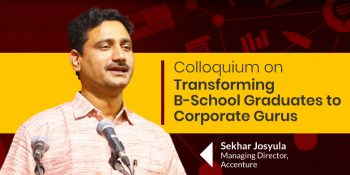 A colloquium on the topic ‘Transforming B-School Graduates to Corporate Gurus’ was held at the ...