A four-day workshop on Temple Architecture and Iconography (Level 2) was conducted by Amrita Darshanam – International Centre for Spiritual Studies (ICSS) at Amrita Vishwa Vidyapeetham, Bengaluru campus, October 17-20, 2019. It came as a follow-up to the Three-day Temple Workshop (Level 1), which was organized by the Centre in January 2019.

The event was inaugurated on 17 October, 2019, in the presence of dignitaries Dr. Manoj Gundanna (Scholar, Bangalore), Mr. Rangarathnam Gopu (Scholar and Engineer, Chennai), Dr. Dhanesh Kurup (Professor, Department of Electronics and Communication Engineering, Bengaluru campus) and Br. Prasanth B. (Assistant Professor, Amrita Darshanam, Amritapuri campus). The gathering was welcomed by Arjun Bhardwaj (Assistant Professor, Amrita Darshanam, Bengaluru campus), who also gave an overview of the workshop. Following this, the dignitaries spoke in a nutshell about the significance of the workshop and formally inaugurated the event.

The resource persons for the workshop were Dr. M. S. Krishnamurthy, Dr. Manoj Gundanna and Mr. Rangarathnam Gopu: all are doyens in their fields of expertise. Detailed insights into the art and architecture of the Pallava Temples and their chronological development were provided along with an overview of the inscriptions and lives of the kings who built the temples. The evolution of permanent stone structures from the earlier wooden ones was described in parallel with the development of Buddhist architecture. Structural parts of the temples, the meaning and significance of the Purāṇa-s and the concepts of Idealism, Symbolism and Realism in Indian Art were discussed in detail. The chronological development of the temple architecture of Badami Chalukyas was also explained in detail.

A special session on “Blood Buddhas” by the India Pride Project was included as a part of the workshop. A documentary on the valuable artefacts that have been stolen from India in the past and the effort needed by the citizens of the country to bring back tangible aspects of India’s heritage was shown. Mr. Nikhil Singh Rajput, the director of the movie, was present and he interacted with the workshop participants about this national issue.

The workshop consisted of three days of theory sessions and a one day site visit to Bhoganandishwara Temple on the outskirts of Bangalore. The concepts that the participants had learnt in theory were described with concrete examples in the temple complex. The workshop was attended by 50 participants from across the country including students from Amrita Vishwa Vidyapeetham, Bengaluru campus. The participants were from different backgrounds including arts, dance, architecture, engineering, medicine, wireless communication and literature.

The four-day workshop concluded with a Vote of Thanks by Mr. Manish Rajan Walvekar (Assistant Professor, Amrita Darshanam, Bengaluru campus) at the Bhoganandishwara Temple. The workshop was a wonderful cultural experience for the lay and the learned alike. 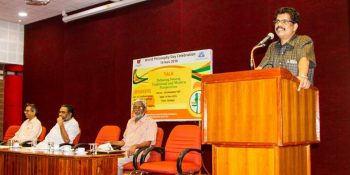 It becomes a matter of great importance to find the individual’s place in the rapidly ... 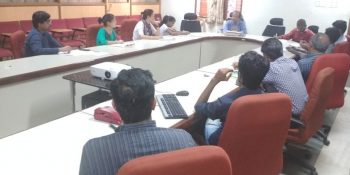 Invited Talk on ‘The Philosophy of Indian Art’

Amrita Darshanam, International Center for Spiritual Studies, organised an invited talk on ‘The ... 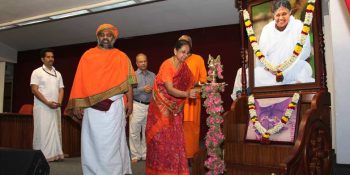