Many villages in India do not have access to electricity. Villages that do receive power, do so intermittently and with frequent disruption, making the supply of electricity unreliable. Komalikudi, a tribal settlement in Kerala well-known for its abundant natural resources, is one such village.

Under Amma’s guidance, members of Amrita Self Reliant Villages (ASeRVe) and Amrita Vishwa Vidyapeetham’s Live-in-Labs® team first worked with residents of Komalikudi, one of the 101 villages adopted by the M.A. Math, to identify key challenges that needed to be addressed. After assessing the requirements of the village, faculty, staff, and students at the Department of Electrical Engineering, the Amrita Center for Wireless Networks and Applications, the Department of Civil Engineering, the Amrita Center for Nanosciences– Nano Solar Division, the Amrita Institute of Medical Sciences (for technical guidance), and the Amrita Center for International Programs implemented a plan to provide electricity to the village from available hydro resources. Faculty, staff, and students designed, developed, and installed a distribution and transmission network which included a check dam, a network of pipes, a 5KW micro hydro generator, an underground transmission line, and a power house. The initial stages of the project began in December 2014 and implementation began in July 2015. The project was an initiative of the Amrita’s Live-in-Labs® program– a program that applies theoretical knowledge to address and solve real world challenges faced by rural communities in India.

Due to the dedication, selfless service, and long hours invested by Amrita faculty, staff, and students, under the guidance of Amma, the micro hydro generator, constructed by the perennial water stream, currently provides 24/7 electricity to 8 homes, 2 street lights,the multi-grade learning center, the village’s Anganwadi (pre-school), and the youth center. Furthermore, each home has 4 connection points with 3 lighting points and a plug point. Villagers currently use energy efficient 7 watt LED bulbs for energy conservation.

A vocational skills trainer in Komalikudi, Mrs. Shobana, said, “Earlier we had to close down our work by 5.00 p.m. as there was no light in the room. Now we have electricity from the micro hydro generator so we can work at night. We are so grateful to Amma and her children for the help.” Echoing her sentiments, Mrs. Vellamma, a volunteer at the village’s Anganwadi said, “Now we have lights in the room so students can study at night.  Many thanks to Amma. We are so grateful to Amma for the support.”

In addition to the micro hydro generator and electric system, faculty, staff, and students from the Amrita Center for Wireless Networks and Applications, the Amrita Center for International Programs, and the Department of Civil Engineering have designed and installed a water distribution system in the village. The system includes a bore well with a pump and 2 overhead water tanks which connect to each cluster of homes through pipes. The entire water distribution framework is currently powered by the micro hydro generator. Plans are in place to increase the power produced by the generator to 8KW in the near future.

Summary of the project is shown in the table below:

As a result of Amma’s grace and compassion, with the electrification of the community center, many educational and social activities can be conducted in the village such as screening the latest films, putting on plays, and running community development and awareness programs.

Aside from access to electricity, villagers now have access to portable water throughout the year via the water distribution system which receives power from the micro hydro generator. With direct access to water and electricity, many villagers’ lives have greatly improved. This is particularly seen in the areas of sanitation and education.

Dr. Kalyan Sasidhar is an Assistant Professor in the Centre for Amrita Wireless Networks and ... 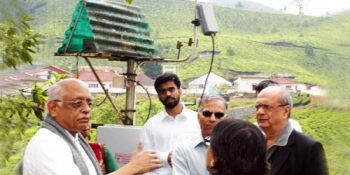 Design, Development and Deployment of a Wireless Sensor Network for ... 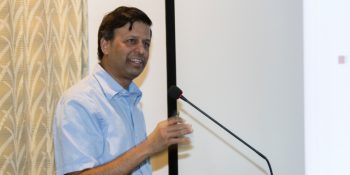 Dr. Nitin Vaidya, a professor in the Department of Electrical and Computer Engineering, University ...