Amrita Vishwa Vidyapeetham has been doing several successful projects on Interdisciplinary Sciences and Technology. The inspiration and guiding force behind our successful projects is Amrita Vishwa Vidyapeetham Chancellor, Sri Mata Amritanandamayi Devi (Amma). Amma has been the driving force behind generating and sustaining high quality research projects combining sciences, technologies, medicine, biology, social sciences and other interdisciplinary domains. Having received over 38 million people one by one and heard their problems, Amma directly guides many projects at Amrita Vishwa Vidyapeetham which have an immediate societal impact. An example where interdisciplinary experts join hands is the landslides risk reduction project taken up by Amrita Center for Wireless Networks and Applications (Amrita WNA). Several life-touching cross-domain projects at AMMACHI Labs, Amrita CREATE, Amrita School of Biotechnology, Amrita Centre for Nanosciences and Molecular Medicine, Amrita School of Business- Coimbatore, Amrita Institute of Medical Sciences & Research Center, Amrita School of Ayurveda and others are directly guided by Amma.

Under Chancellor’s suggestion, Amrita Vishwa Vidyapeetham integrated Computer Science professors and Research Staff, Programmers, Wireless Tech experts, Geologists, Civil Engineers, Physicists, Philosophy majors, Social Work professors and mathematicians were assigned to help the Munnar landslide issue. Vice-Chancellor of Amrita Vishwa Vidyapeetham, Dr. P. Venkat Rangan and Dr. Maneesha V. Ramesh were asked to learn, design and make the hardware and software that were to be deployed at Munnar to predict landslides. Although funded projects did not ask for real-time deployments, Chancellor insisted that project grants be made into life-saving technologies. As a recognition of this effort, Amrita Vishwa Vidyapeetham was awarded the ‘World Centre of Excellence on Landslide Disaster Reduction’ by the International Program on Landslides (IPL) on the fourth World Landslide Forum, which was held at Ljubljana, Slovenia from 29th May to 2nd June, 2017.

Other examples include Amrita Centre for Nanosciences and Molecular Medicine in Kochi, Kerala, headed by Dr. Shantikumar Nair, where the nanotechnology is used to improve healthcare outcomes and revolutionize the processing and storage of energy. Amrita School of Biotechnology’s Dr. Bipin Nair (Dean, School of Biotechnology, Amritapuri) and Dr. Geetha Kumar (Professor, School of Biotechnology, Amritapuri) were directly told to work on diabetes and wound healing. Amma suggested that they use cashew nut oil as a lead and now their labs have been working on phytochemical leads based drug discovery and biomedical engineering of US patented low-cost insulin pump and sensor strips. Prof. Balaji Hariharan, Research Scientist at the Amrita WNA, reports to Chancellor Amma on his technologies for communication to establish immersive classroom experience aided by ICT. Prof. Balaji had started working on multi-point tele-immersive environments for global classrooms and other technologies for education and disaster mitigation.

India’s burgeoning population faces big challenges. When solutions are imported from outside the country, the hospitals, schools and other institutions often pay a premium which is then passed onto the very people that are meant to be served. If India can innovate its own solutions, it can keep the costs down and scale the solutions up. It’s in that spirit that Chancellor’s Amrita Vishwa Vidyapeetham is cultivating one of the fastest-growing, robust research programs in the country—all focused on improving quality of life for those in need. 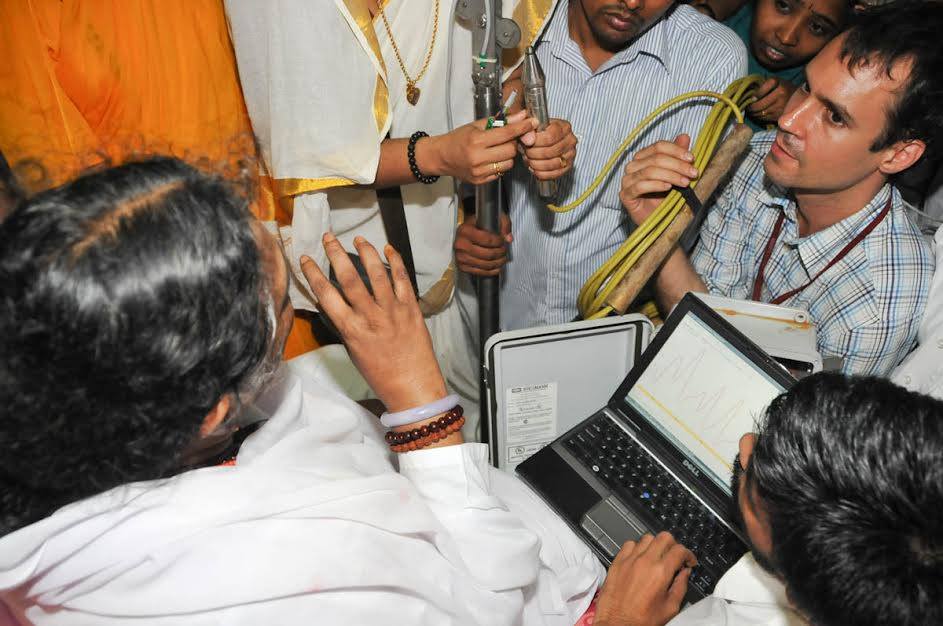 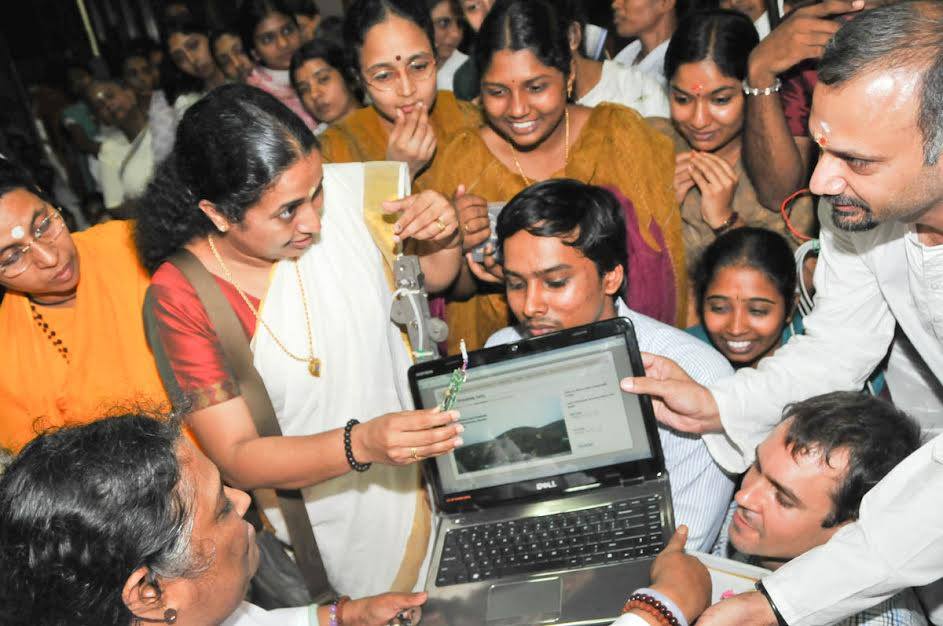 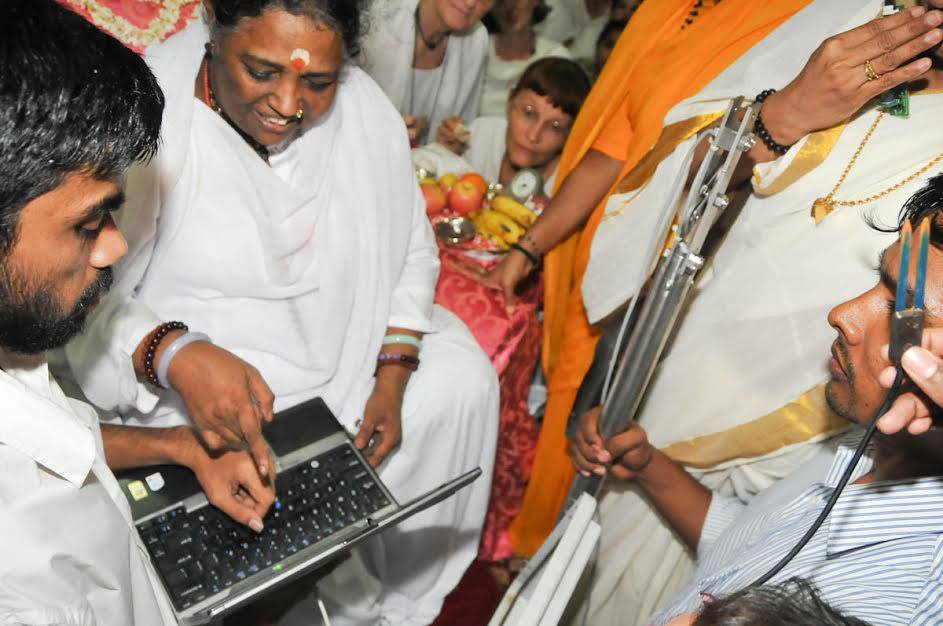 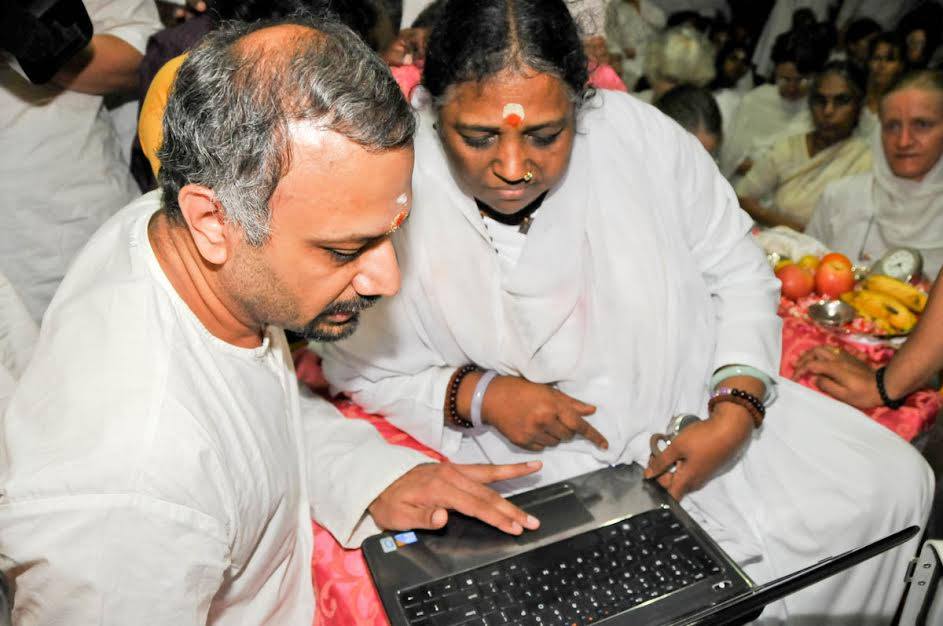