The first-ever edition of the Amrita Innovation & Research Awards (AIRA) was held on April 8, 2021. The awards were given in six categories to recognize and honor the university’s outstanding faculty, including Chancellor’s Research Excellence Award, New Discovery & Innovation Labs, Chancellor’s Innovation Award, Chancellor’s Publication Excellence Award, Publication Merit Award, and Certificate of Appreciation for Research. Prizes worth ₹2.5 crores ($350,000 US) were given in five categories to recognize and honor Amrita’s outstanding faculty.

Amrita Vishwa Vidyapeetham, India’s top private university, has also announced a grant of ₹100 crores ($13,400,000 US) to set up 50 state-of-the-art New Discovery and Innovation Labs at its campuses across India. These research powerhouses will be in operation within the coming year and drive cutting-edge discoveries in fields such as engineering, medical sciences, computer sciences, material sciences, nanobiosciences, biotechnology, biomedical engineering, and sustainable development.

Sri Mata Amritanandamayi Devi, Amma, who is Chancellor of the university, presided over this prestigious event. She emphasized that the university is focused on compassion-driven research to find solutions for people in need, especially those who live in India’s villages.

“My children’s sincere efforts have resulted in projects that have greatly helped the lower strata of our society. These awards are a symbol of that happiness,” said Amma at the event.

“There is no doubt that attaining new knowledge, conducting research and pursuing innovations greatly contributes to the progress and development of individuals, as well as the nation. However, most often the direct beneficiaries of such knowledge are privileged, educated people in cities,” she continued.

“Research should benefit the common people. At the same time, we should be careful to safeguard the serenity, beauty and culture of our rural villages. Only then will the nation’s progress become complete. Only a value-based research program can pave the way for such balanced progress. We have to move forward keeping this goal in mind.”

“Research and innovation are the keys to leveraging technology for the development of the nation. In our mission to create highly productive and trained manpower for national benefit, we are recognizing, mentoring and incentivizing our talented young faculty workforce,” said Dr. P. Venkat Rangan, Amrita’s Vice-Chancellor.

“Emerging from the pandemic, we are surprised to see significant accomplishments and outstanding research outcomes of our faculty—namely publications and patents—despite this difficult year.”

The Chancellor’s Innovation Awards recognized 49 patents, both national and international, that were granted to Amrita faculty over the last five years. These patents created intellectual property for the varsity and the country in the areas of biotechnology, nano-biosciences, engineering and medicine.

The Chancellor’s Publication Excellence Awards were given to individual faculty members who distinguished themselves by publishing high-impact papers in Tier 1 journals around the world in pandemic times. About 500 faculty members of Amrita Vishwa Vidyapeetham, as authors and coauthors, published around 150 research papers in top-ranked peer-reviewed journals last year during the pandemic.

Several Guests of Honour virtually attended the event, including government policy developers and professors with high-level institutions in India, the United States, Australia and Europe.

“I am glad to note that the incubator at Amrita Vishwa Vidyapeetham, supported by Atal Innovation Missions, is performing exceptionally well by supporting more than 100 plus startups, and six startups raised external investment worth ₹174.3 crores ($23,300,000 US),” said Amitabh Kant, CEO of the National Institution for Transforming India (NITI Ayog), who virtually attended the event.

NITI Ayog is a Government of India policy think tank that aims to achieve sustainable development goals through cooperation between the national and state governments by developing economic policies that use a bottom-up approach.

“That is what Amrita really is – it is a personification of true selfless service to humanity. All that Amrita has done is because of the divine grace of Amma, propelling every one of you, moving forward in science and technology, and Amrita is a great catalyst.”

In addition, the Director of the Indian Government’s Defence Research & Development Organisation (DRDO) took part. G Satheesh Reddy said, “I am sure that Amrita Vishwa Vidyapeetham, with the blessings of Amma, will come up in a big way in the country and stand as an example which produces a lot of research output and innovations output. I wish Amrita will become the engine of innovations.”

The entire academic community of Amrita, including 1,500 faculty members and 15,000 students, attended the event via video conferencing on Zoom. 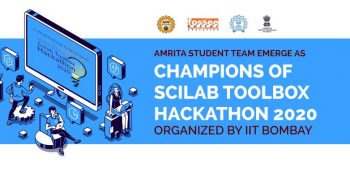 A student team from the School of Engineering, Amrita Vishwa Vidyapeetham, Coimbatore ... 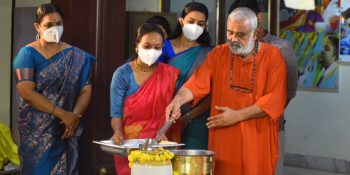 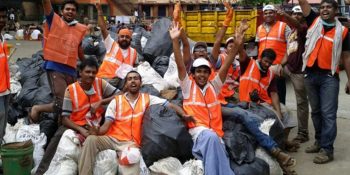