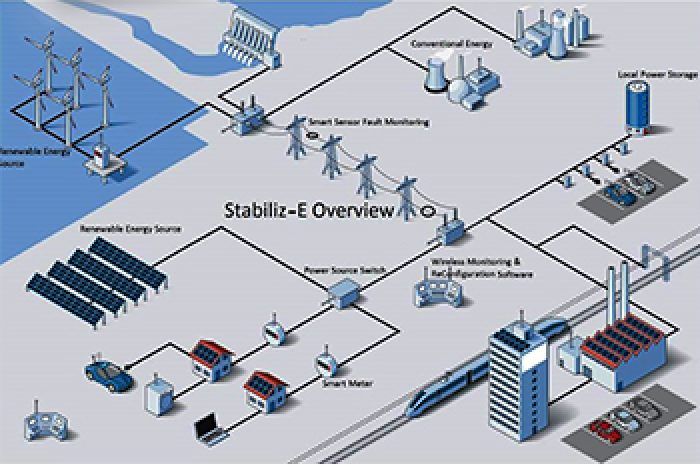 Stabiliz-E is a 3 year project with Indo-European collaboration under the New INDIGO Partnership Program which intends to provide a cost-effective infrastructure and functional solution to combine local renewable energy sources with a high level of energy availability and sufficient quality of service for everyday use.

This is a European commission Indigo-FP7 International collaborative project. This project consists of a consortium of partners representing three European countries, Portugal, Germany and Finland in collaboration with India. Today, modern power systems are being operated closer to their limits due to economic, technical or environmental reasons One critical aspect of future smart grids will be self-stabilization in terms of “availability” and “Quality of Service”

Project is the result of immense need to move from traditional, centralized, static energy grid towards a decentralized and dynamic grid, which gives more freedom to producers, distributers, and consumers.  One critical aspect of future smart grids will be self-stabilization in terms of “availability” and “Quality of Service” which is considered as stable energy.

Project Collaborators (from other institutes / companies)

The project kick-off meeting was held at the Amrita Vishwa Vidyapeetham on 14-15th Nov 2014, to revise the plan for the project and to examine the existing infrastructure and technologies that can be used in the project. A second project meeting was held at IITKanpur on 14-18th April 2015 to chalk out the internal project deliverable and scientific tasks until Sept 2015.

Future (after the project)

Isolation,Partial Purification and Characterisation of Bacteriocins from Fermented Foods