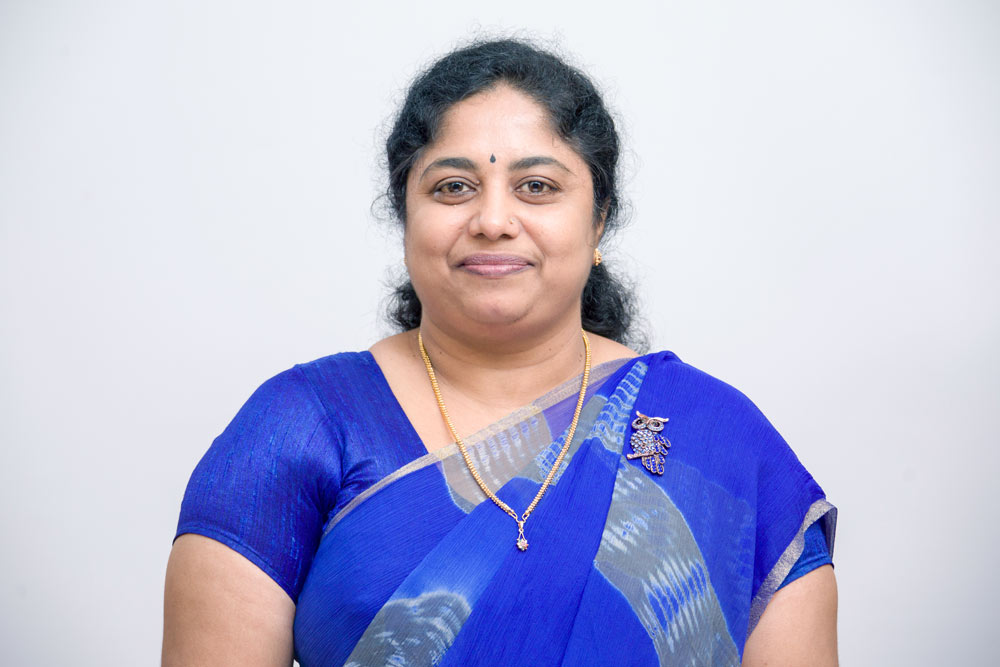 She graduated BAMS from Govt Ayurveda College, Tripunithura, Ernakulam and post graduation in Kaumarabhritya, MD(Ayu) from I.P.G.T and R.A., Gujarat Ayurved University, Jamnagar. She has over 23 years of experience in Ayurvedic Practice including Academic teaching and clinical research, Clinical practice in Kaumarabhritya, New product development.

She is reputed in Ayurvedic circles as the coordinator of various International Ayurveda Conferences including three editions of Global Ayurved Festival Kerala, 2012,14 &16 and International AYUSH Conclave 2019 organized by Government of Kerala. She was associated with various projects of The Arya Vaidya Pharmacy Group of Companies in various positions at the beginning of her career from 1996-2003.

She has been an honorary Director of the International Ayurveda Foundation, an NGO promoting Ayurveda globally as a Scientific System of Medicine. She is advising on various issues related to the Globalization of Ayurveda practices, focusing on the ethical and genuine practice of various therapies, with expertise in various International laws on trade and practice of Traditional Medicine and their impact on Ayurveda.

She has worked for a short time after post-graduation as an Assistant Professor in Kaumarabhritya in Mannam Ayurvedic Cooperative Medical College, Pandalam. She worked as the Principal Research Scientist in the Department of Drug Discovery and Development with Reliance Pharmaceuticals Ltd. under Reliance Industries, Navi Mumbai, before joining Amrita School of Ayurveda.

She was a Visiting Faculty to the European Academy of Ayurveda in Birstein, Germany, training the Ayurveda students in Ayurvedic Pediatrics. She has been invited as a resource person in various summits and seminars including the Professional Students Summit 2019 by the Government of Kerala along with legendary luminaries such as Dr. M. S. Valiathan and Dr. Soumya Swaminathan.

She has presented over a dozen papers in various national and International Seminars on Ayurveda and published two papers on Childhood Asthma.