An International Public Health Conference was held at AIMS November 2-3, 2018, which brought together dozens of experts from the government, NGOs, global health bodies and the corporate world to discuss the challenges facing public health in India. These challenges include universal health coverage, cancer, cardiovascular disorders, dengue, snake bites, oral health, diabetes and mental health. At the event, one particular, multifaceted challenge was identified as of paramount importance in India. According to the studies, it included conquering infectious diseases, tackling NCDs (Non-communicable diseases) connected with lifestyle changes and the emergence of new pathogens causing epidemics and pandemics.

Recent data shows that NCDs and injuries together have overtaken infectious and childhood diseases in every state of the country in terms of disease burden, a truly challenging situation to public health. Today, NCDs account for 61.8% of all deaths in India, followed by communicable diseases (27.5%) and injuries (10.7%). While infectious and associated diseases made up majority of disease burden in most of the Indian states in 1990, this was less than half in all states in 2016. The experts at the conference felt that India’s healthcare system is presently equipped to address only acute diseases and there is a need to change this pattern to include the rising number of non-communicable diseases also.

Speaking at the event, Dr. Vijayakumar, Chief of Public Health and Community Medicine, Amrita Hospital,  observed that India’s public health situation is problematic, with underfunded and overcrowded hospitals and inadequate rural coverage. This is the case, in spite of the increasing demand due to the growing incidence of age and lifestyle-related chronic diseases, he elaborated. He further corroborated his point with data showing that lifestyle diseases occupy the lion’s share of inpatient beds in Indian healthcare sector, amounting to 50% of the total spending.

With 65 million patients, India is home to one of the largest diabetic populations in the world and this recent development has resulted in the expansion of super-specialty hospitals across the nation. The rapid growth of the private health sector has come at a time when India’s public spending on health was just 0.9% of the GDP, which was ahead of only five other countries in the world – Burundi, Myanmar, Pakistan, Sudan and Cambodia.

Another major point he drove home is the lack of government efforts in providing quality healthcare to the public. Unlike many developed nations, there are no social security measures currently available in India which cover healthcare expenditure. Dr. Vijayakumar substantiated his argument with data showing that the govt. agencies provided only 33% of India’s healthcare expenditure in 2012. Of the remaining private spending, as much as 86% came from people themselves. Statistics have also shown that over 40% of all patients admitted in Indian hospitals have to borrow money or sell assets to cover their medical expenses and 25% of all farmer patients are driven below the poverty line by catastrophic healthcare costs.

Talking about health risks in India presently, Dr. Vijayakumar observed that the most life-threatening diseases in 1990 were diarrheal disease and ischemic heart disease, but chronic obstructive pulmonary disease (a group of lung conditions that cause breathing difficulties) has climbed the charts to become the second deadliest killer of Indians today, up from 5th position in 1990. Apart from that, diarrheal diseases, cerebrovascular disease, lower respiratory infections and tuberculosis, in that order, remain the other four leading causes of death of Indians today. While the per person disease burden dropped in the country by 36% from 1990 to 2016, major inequalities remain among the states, with the burden varying almost two-fold between them. Dr. Vijaykumar also pointed out that malnutrition during pregnancy remained the single largest health risk in India, affecting both mother and child and is responsible for 15% of the total disease burden in 2016.

Dr. Prem Nair, Medical Director, Amrita Hospital, began his speech with an observation that India is presently in a state of transition – economically, demographically, and epidemiologically – in terms of health. Then he went on to paint a broader picture of India’s healthcare industry and elaborated on the various challenges of the immediate future. Apart from the high disease burden, he has found many other challenges in improving public health including low government expenditure, the shortage of human capital in the sector, lack of private-public partnership, absence of an organized health system, inefficient public health workforce, absence of modern technology and lack of access to marginalized populations.

Responding to Dr. Prem Nair, Dr. Ashwathy, expert in NCD, opined that the topmost priority should be more public investment in the healthcare sector in order to ensure more efficient disease prevention and health promotion activities. She further elaborated that the government expenditure on health should increase to at least 2.5% of GDP by 2025. Along with this, the existing government infrastructure needs to be strengthened to improve the process of service delivery and the emerging epidemic of non-communicable diseases also requires to be addressed. She concluded her speech by pointing out the huge deficiency of qualified manpower in the healthcare sector of India which is very low (7 physicians per 10,000 people and 17.1 nurses per 10,000 people) in comparison with the global average of 13.9 and 28.6, respectively.

While discussing the government measures, the experts agreed that the ambitious Ayushman Bharat Yojana is a giant leap towards universal healthcare, which will not be an easy accomplishment in a nation like India. But they have also observed that it will a challenging task to quickly implement this scheme in accordance with the emerging healthcare requirements of the future. The scheme marks a significant shift of focus in the government strategy from particular diseases to comprehensive primary healthcare, noted Dr. Vijayakumar. But, he was critical of the way in which it was implemented as there was a lack of focus on the reform of the broader healthcare system. He went on to say that package rates under Ayushman Bharat for various procedures and interventions are deemed too low by private hospitals and he observed that the scheme caters only to inpatient expenditure, while outpatients and medicines are largely left out. Finally, he commented that without effective and comprehensive primary healthcare, pouring money into hospitalization at the secondary and tertiary level will only lead to an increase in overall health expenditure. 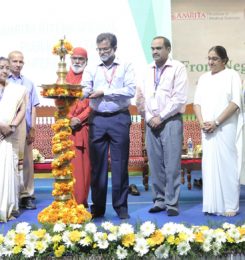