Awarded at HP-Catalyst Summit in Beijing

Rural India lacks sufficient teachers and lab equipment to educate the lakhs of students enrolled in its schools.

Now Amrita Vishwa Vidyapeetham’s Center for Research in Advanced Technologies in Education will help teach language, science, technology, engineering and math subjects through virtual lessons and experiments as well as interactive animations and simulations, the students can access online free of charge.

At the Hewlett Packard (HP) Catalyst Summit in Beijing last month, the Center received a grant of $ 100,000 to support its next steps toward scale-up and to go deeper with innovations in this initiative.

More than seventy candidates had applied for the funding; only five were awarded. In addition to the Amrita Center, a recipient from Kenya and three from the United States were selected.

“The HP Catalyst Leadership Fund was established to provide additional support to progressive Catalyst projects that have compelling, emergent evidence of learning and teaching outcomes, international collaboration and the potential to scale,” he said, elaborating on the choice of awardees.

The People’s Choice award, given based on the number of popular votes, was also won by Amrita. Five winners, including Amrita, and four others from USA, China and South America were showcased at the Summit.

Amrita is a member of the HP Catalyst’s Measuring Learning Consortium. Profs. Prema Nedungadi and Raghu Raman explained the goals of the Consortium.

“We are developing methods to assess STEM (Science, Technology, Engineering and Math) skills including innovation, creative and higher-order thinking, global collaboration and the ability to tackle big, open-ended challenges; these are often not evaluated in schools.”

“We want to foster dialogue and debate, challenging assumptions about what’s needed and what’s possible, to better prepare students to compete in this information economy.” 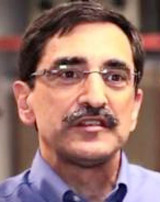